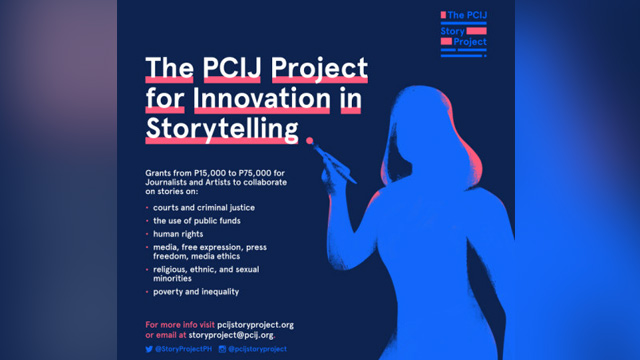 This a press release from the Philippine Center for Investigative Journalism.

The Philippine Center for Investigative Journalism announced today the launch of The PCIJ Story Project, a new initiative that will provide grants of P15,000 up to P75,000 to journalists and artists who work together to produce innovative stories in the public interest.

The PCIJ Story Project will support projects that document and expose abuse and wrongdoing in the following subject areas: human rights, the misuse of public funds, threats to free expression and press freedom, poverty and inequality, and religious, ethnic and sexual minorities.

The project will encourage journalists and artists to team up to tell stories in nontraditional formats. It will support stories intended for legacy news media as well as social media platforms, digital-only websites, and non-digital platforms that have traditionally not been used for journalistic production, such as film, the visual arts, theater, and music. Multiplatform storytelling is encouraged, but proposals for stories told in traditional print or broadcast formats will also be accepted.  The project will provide funding to seed projects – for example to do a story treatment, rough cut, or a trailer for a documentary project in order to seek further funding.

PCIJ will continue to do data and investigative reporting inmultimedia formats. The PCIJ Story Project is a special initiative intended to encourage new forms of storytelling.

The PCIJ Story Project will accept proposals for journalist-artist collaborative projects, including for short nonfiction films, photo essays, graphic novels, even spoken word as long as they are based on facts and are backed up by documentary or testimonial evidence.  There is no requirement to publish or air on traditional media. Stories intended for YouTube, Instagram, Facebook or other social media platforms will be supported as long as they are accompanied by an ambitious and viable marketing, dissemination, and audience engagement strategy. In addition, they must be stories of significant public interest. They must also be based on documented facts and evidence.

Interested parties are required to submit a story proposal. The deadline for the submission of proposals for the first round of funding is September 15, 2017.

For more information on The PCIJ Story Project please visit pcijstoryproject.org or email us at storyproject@pcij.org. – Rappler.com