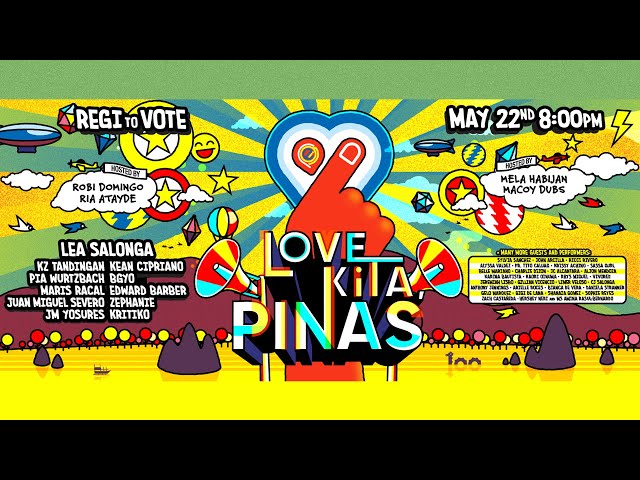 This is a press release from Eleksyon 2022 Koalisyon.

The need for national solidarity is greater than ever as the Philippines marked less than a year before the 2022 national elections which will be held on May 9, 2022.

As Filipinos are becoming more politically engaged, especially on social media, celebrities and online personalities have become increasingly vocal on essential issues in the national consciousness.

Various influential figures will come together in the hopes of encouraging seven million qualified citizens to register and vote through “Love Kita Pinas,” a nationwide virtual launch event of Eleksyon 2022 Koalisyon.

The virtual event will be streamed live on Saturday, May 22, at 8 pm through the coalition’s Facebook page, digital networks of media and news networks, and partner TV stations across the country.

Eleksyon 2022 Koalisyon is a non-partisan, multi-sectoral coalition of 29 civic and religious organizations and individuals to encourage eligible citizens to register and vote.

This event is part of the coalition’s #RegiToVote campaign that hopes to mobilize citizens through encouraging local voters’ registration initiatives on the ground and through social media to register an additional seven million voters by September 30, 2021.

The hosts believe that the event is a gathering of Filipinos from different walks of life united in their love for country and their belief that Filipinos’ future lies in one vote.

“All the artists and production people lent their talent and time; more importantly, poured their hearts out for this advocacy,” Habijan said.

Domingo said that “love entails a lot of facets and elements including respect, dignity, and integrity…things that we need now more than ever in and for our country.”

Aside from this, KZ Tandingan will be performing the event’s theme song “Love Kita Pinas” arranged by Jonathan Manalo. The song premiered through Koalisyon’s social media accounts on May 9 in anticipation of the event.

Rising P-pop group BGYO will also be performing an event-exclusive remix version of their debut single, The Light. The group recently ranked second on the Billboard’s Next Big Sound Chart for the week of May 15, just over three months after their official debut.

Kean Cipriano will be performing an exclusive rendition of Botante Importante, a song that talks about how every Filipino has the power to decide for their future. Maris Racal will also be singing her hit song, Ikaw Lang Sapat Na, to highlight how Filipinos can collectively love one another and their motherland.

Miss Universe 2015 Pia Wurtzbach will also be making a special appearance during the program. Wurtzbach believes that now is the perfect time for Filipinos to use their voices in pushing eligible citizens, especially the youth, to register and vote.

(I believe that we should acknowledge that we were not prepared in our experience dealing with the pandemic. However, this has opened our eyes and gained awareness towards what we want to attain for our country.)

Other personalities and thought leaders appearing in the program include Sylvia Sanchez, John Arcilla, Ricci Rivero, Alyssa Valdez, Sassa Gurl, JC Alcantara, Charlie Dizon, and Vivoree through different segments that will encourage active participation amongst Filipinos to register and vote.

Among the convenors of Eleksyon 2022 Koalisyon is AKTOR-League of Filipino Actors, an association of artists in the television and film industry. AKTOR president Agot Isidro emphasized that “strength of an organization is dependent on its members” and asserts that it is “imperative that each member should have freedom to express, to be heard and to make his opinions known, without fear of being ostracized, penalized and dismissed.”

“We are hoping the same circumstance would apply to the state of the nation. If you want to be heard and be counted, the upcoming election is one of the many platforms for us to raise our voices and choose our leaders,” Isidro added.