#SG50: What PH’s NAIA should learn from SG’s Changi Airport 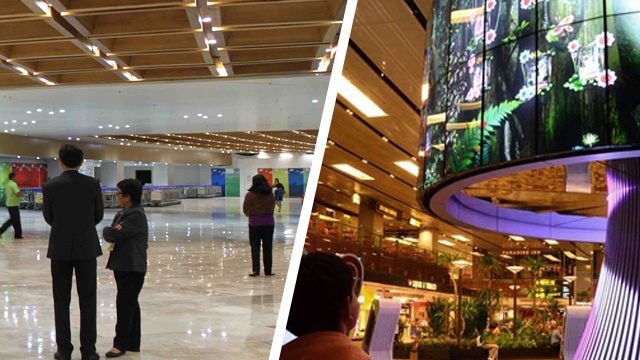 MANILA, Philippines – The Philippines and Singapore are both exhausting all means to prepare for a borderless economic community by the end of the year, and one of these is through airport expansion projects to advance their global profiles. (READ: #SG50: Why Singapore is a model for global competitiveness)

Similarities, however, end there.

Ninoy Aquino International Airport (NAIA), the Philippines’ main international gateway, is feeling its age. Constructed for a different time of air travel, NAIA swells with congestion in its terminals, where 34.1 million passengers passed through last year. This was above its handling capacity of 28 million passengers annually.

Overcrowding, lengthy queues, limited seating, and smelly toilets are among the grievances of travellers passing through NAIA, dubbed the 4th world’s worst airport by website The Guide to Sleeping in Airports.

On the other hand, travellers passing through Singapore’s Changi International Airport lauded its accommodating staff, array of activities for transit travellers, and uncrowded terminals.

It was also in 2014 when Changi International Airport has been voted the best airport in the world by The Guide to Sleeping in Airports — its 18th consecutive year. If there is one thing NAIA should learn from Changi, Philippine Transportation Secretary Joseph Emilio Abaya said “it should be run like a hotel.”

“There should be an attention to detail, and the importance of customer service and efficiency should be a main priority,” Abaya told Rappler.

Unlike NAIA, Changi boasts numerous wonders to entertain and attract spending – from a host of shops and a roof-top swimming pool, an aviation expert who works for Deloitte India said in an interview.

“From time to time, Changi comes up with promotions for shopping if you fly in and out of the airport; while NAIA may charge you for breathing if they could,” the aviation expert who requested anonymity said.

Changi, according to the source, revealed much about how NAIA could give travellers what they want without lots of floor space.

The size of an airport is not a limitation to achieve smooth and efficient operations, says a Changi Airport official.

“If service levels are improved and people get a lot more comfortable when they go through an airport, they tend to stay a bit longer, shop more, thus enhance the airport’s revenue-generating capacity, and generally say nice things about the airport when they get home,” Changi Airport Vice-President Jose Pantangco said during his visit to the Philippines in 2011. NAIA can learn something from Changi through its user experience-based business model, the source said.

Changi’s efforts to erase the effects of dated infrastructure is something NAIA should emulate from Singapore’s main international gateway, the source said.

These efforts include “continuous upgrades to its existing terminals and building new facilities to maintain its reputation for setting standards in airport service quality.”

Although the number of passengers passing through Changi is far from its estimated capacity of 66 million passengers, airport officials are implementing projects to stay far ahead of demand.

Singapore’s fourth passenger terminal is set to be operational in 2017, along with completion of an airport hotel expansion project They are also in the process of planning for a fifth terminal.

According to Changi Airport Group, it is also set to open a 5-story indoor garden and shopping mall, named Jewel Changi Airport – featuring 5 levels of hiking trails and a 46-foot-tall “rain vortex” waterfall.

For the Philippines, it has started implementing airport public-private partnership (PPP) projects, seeking assistance from private investors to expand, operate, and maintain the key airports in the country.

“We’re pursuing airport PPP projects wherein private sector is allowed to operate and maintain, even expand our key airports – like those in Mactan, Cebu, and Manila,” Abaya said.

The contstruction of the Philippines’ first airport PPP deal — a new terminal at the Mactan-Cebu International Airport (MCIA) – started on June 29 this year.

The P74.56-billion ($1.65-billion) NAIA development project is seen to transform the Philippines’ main international gateway into a “world-class modern airport facility” and is seen to be rolled out within the year, Abaya said.

The P1.3 billion ($28.85 million) NAIA Terminal 1 rehabilitation project, which involves structural retrofitting and other engineering works, is ongoing and is scheduled to normalize operations within the year.

The P1.9 billion ($42.17 million) rehabilitation of NAIA Terminal 3 by Takenaka Corporation of Japan has been completed and 5 foreign airlines have already transferred to the newest terminal.

In April this year, President Benigno Aquino III hailed the renovations to the Philippines’ main international airport, expressing optimism it would soon shake off its ranking on one website as the world’s worst airport. (READ: Aquino says ‘worst airport’ now looking much better)

Almost a year after he personally apologized for the failure of air-conditioning at NAIA Terminal 1, Aquino said the facility appeared to be completely different. “It’s like I have entered a completely different airport,” he told reporters as he inspected the 34-year-old terminal during the Holy Week travel season this year.

During the February 2015 announcement of the Singapore Airlines SilverKris lounge at NAIA 3 (which opened in July), Abaya acknowledged that Singapore is a gateway of European investors and tourists to ASEAN (Association of Southeast Asian Nations), which the Philippines is part of.

As such, the Philippines should avail more of this opportunity, he earlier said.