Facebook Twitter Copy URL
Copied
'At the household level, there must be sufficient income for all Filipinos to meet the basic food and non-food needs for their families,' says Duterte

MANILA, Philippines – President Rodrigo Duterte confirmed that his administration will aggressively pursue lower tax rates in his first State of the Nation Address on Monday, July 25.

“My administration will pursue tax reforms towards a simpler, more equitable and more efficient tax system that can foster investment and job creation. We will lower personal and corporate tax rates,” he said during his address. (LIVE: President Duterte’s SONA 2016)

“At the household level, there must be sufficient income for all Filipinos to meet the basic food and non-food needs for their families and we will continue to attract investments that will generate thousands of jobs a year, jobs that are suitable for the poor and less skilled members of the workforce,” he added.

To help improve transparency in taxation and to boost collection, Duterte also promised to relax the bank secrecy law.

The Philippines currently has the second highest tax income rate in Southeast Asia and the highest corporate tax rate among its peers in the 6 biggest economies in the region, the ASEAN-6. 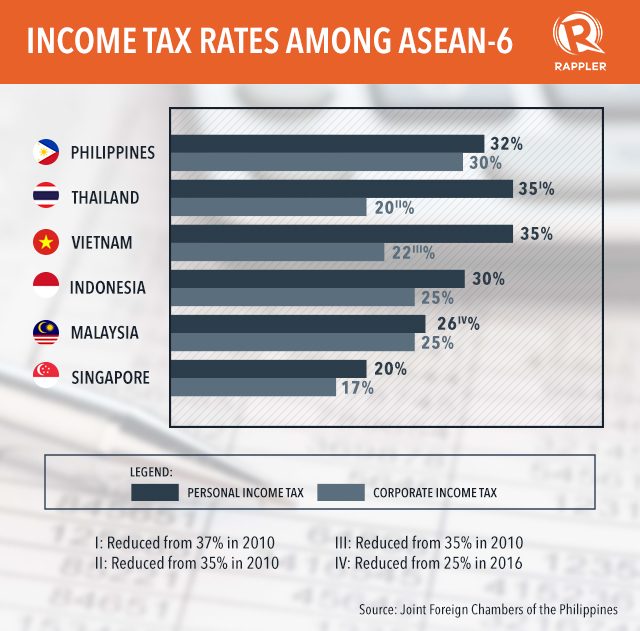 “If I am given the leadership of the ways and means committee, we will prioritize these measures but we will need the help of the Lower House since all tax measures must originate from them under our Constitution,” he said in a statement released immediately after the SONA.

This includes a review of the tax system, initially to update the income tax brackets and eventually to lower corporate and individual tax rates.

Dominguez has also said that he is leaning towards getting the easier reforms done first as opposed to trying to do them all at once.

These low-hanging fruits include indexing fuel excise tax to inflation. Academics studying the issue forecast that adjusting fuel tax could have the same effect that sin tax has on health by netting the government an additional P20 billion. – Rappler.com