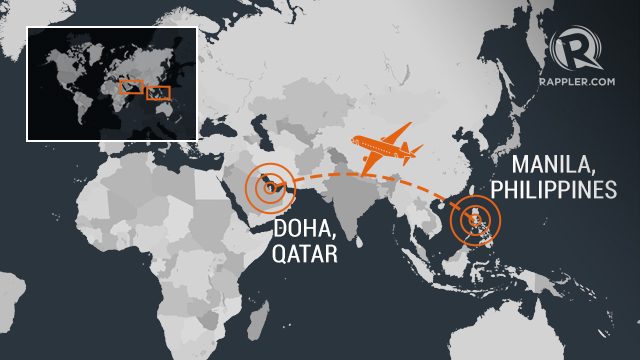 Facebook Twitter Copy URL
Copied
The Philippine Department of Transportation has one condition for Qatar Airways: eventually have flights from Davao City

This was after the Philippines and Qatar signed a new memorandum of understanding (MOU) on air services, amending a 2015 agreement to pave the way for more flights.

The Department of Transportation (DOTr) announced this in a statement on Thursday, June 1, adding that the MOU was signed by Transportation Undersecretary for Aviation Manuel Antonio Tamayo and Qatar Civil Aviation Authority Chairman Abdullah Al-Subaey.

The new MOU increased the traffic rights between Manila and Doha to 18 flights per week from the current 14 for the designated airlines of each country.

Recently, however, Cebu Pacific announced that its flights to Doha would end due to a “substantial oversupply of seats” that made the route “unsustainable.” Cebu Pacific’s thrice weekly Manila-Doha-Manila route will have its last flight on July 1.

The DOTr said the landmark agreement includes a condition for Qatar Airways to have flights from Davao City within one year from the start of the 4 additional flights to Manila. Davao City is the hometown of President Rodrigo Duterte.

The expansion of traffic rights is seen to enhance connectivity as well as facilitate trade, investment, and services between the two countries.

The DOTr said the inclusion of Davao City in the route structure of Qatar Airways will “provide the much-needed linkage for Davao to the major markets of the world.”

“This connectivity will support Davao’s emergence as a major economic and commercial hub of the Philippines,” said the DOTr. – Rappler.com