One of the Philippines’ fastest-growing business groups, the Sy’s SM group benefits from an economy considered as the best performing in Southeast Asia. (READ: PH economy grows slower by 6.4% in Q1)

It has also grown wiser through the years, as the 2nd generation family members have seen presidents come and go. President Duterte, after all, is the 9th president that the Sy family has to work with since the Sy patriarch started his shoe business in 1958.

What bodes well for the 6 siblings today is that the President has largely been focused on his pet issues such as the war on drugs and terror, leaving the business community to run its own show.

Sy Sr is now 92, and securing his legacy means the 2nd generation Sy family members are navigating not only the political environment, but also the changing tastes of their customers and the growing sophistication and financial muscle of their competitors.

These come hand in hand with laying the groundwork for a smooth transition of the business – made up of the country’s largest bank, biggest property developer, and operator of some of the world’s biggest malls – to the 3rd generation. (READ: SM Investments shakes up management, prepares 3rd generation)

A year into Duterte’s 6-year term, the Sys have stayed neutral on the controversies that hound the administration.

Family members have in fact become more visible in joining the other big business groups in events hosted by the President or his Cabinet. Finding strength in the “Philippine Inc.” team diffuses the risk of being singled out.

In state visits, a representative of the Sy family is often part of the President’s private-sector delegation. The billionaire’s eldest daughter, Teresita Sy-Coson, was part of Duterte’s delegation in an Association of Southeast Asian Nations (ASEAN) Summit in Laos in September 2016.

The heir-apparent was also seen during the second round of the “Dutertenomics” forum held on April 26. (READ: Ayala, SM taipans finally at ease over MRT-LRT common station)

Her brother, Hans Sy, was among the business tycoons invited by Malacañang for an intimate dinner with the President in January 2017. He also joined Duterte’s state visit to China in October 2016.

Too much is at stake: Real estate company SM Prime Holdings Incorporated recently became the first Philippine company to be valued at P1 trillion. Holding firm SM Investments Corporation (SMIC) is not too far behind.

But the Sys’ support for the administration’s priorities and policies has not made them bet all their money on these projects. Instead, they continue to focus on their core businesses: retail, property, and banking.

Malls in Mindanao, pivot to China

Duterte, a former mayor of Davao City, is the first president from Mindanao, which has received less attention and budget under previous national leaders. Following Duterte’s and his economic team’s pronouncements to boost investments outside of Imperial Manila, SM in February 2017 announced that it will build 5 new malls in Mindanao until 2020.

Growing its already extensive network of malls in the Philippines has long been in the decades-long expansion plans of the group. SM Prime currently operates 60 malls nationwide, with a goal to penetrate more cities and towns to capture the growing middle class in the provinces. It aims to increase its malls to 75 by 2018.

By the end of 2017, SM Prime will have 65 malls in the Philippines, with 5 outside the congested Metro Manila scheduled to open in the coming months. These are SM CDO Downtown Premier in Cagayan de Oro, SM Cherry Antipolo in Rizal, SM Center Tuguegarao Downtown in Cagayan, SM City Puerto Princesa in Palawan, and SM Center Lemery in Batangas.

It also has 7 malls in China. SM has been present in China since 2001 when it opened SM City Xiamen mall.

The Philippines’ pivot to China and the warming of ties between the two countries is good news for SM. The group currently has 7 malls in China, and it has long expressed interest to increase its presence there to complement revenues sourced from its Philippine business.

This is despite warnings from some analysts about a continuing economic slowdown in China. “Even with the slowdown, it is still a tremendous opportunity to be there. China is still the number two economy in the world. This is one space I believe we should not miss out,” SM Prime chairman Henry Sy Jr said in a press conference last April 25.

The Sy family’s property company even plans to start with the pre-selling of its housing project located next to its mall in Chengdu, Sichuan province, by end-2017. (READ: SM Prime, Ayala to defy China’s slowdown)

“It’s a test project for us to see how the market will respond to an SM Residences development. If we get good sales, we’ll do more but within the shopping complex of SM, not stand-alone,” SM Prime president Jeffrey Lim had said.

To address the emergence of e-commerce, which is threatening malls’ foot traffic, the SM group has taken tentative steps like a partnership with online platform Lazada to sell products from the SM Store and acquisition of a 34.5% stake in 2GO’s parent company. “We’re happy that in the Philippines, we like socials [as a people] so our malls are centers of the community,” Sy-Coson had told a gathering during the 2017 ASEAN Summit in Manila.

Aside from expanding in Mindanao and China, parent firm SMIC also started participating in some public infrastructure projects. This is alongside the Duterte administration’s P8-trillion catch-up initiative in infrastructure.

Unlike other conglomerates, such as Ayala Corporation and Metro Pacific Investments Corporation, the SM group has not been bidding actively for public infrastructure deals.

They have mostly been on the sidelines, with BDO Unibank, which they control, offering to provide financial packages to consortiums taking direct risks in the government’s capital-intensive infrastructure projects. That means the SM group’s capital remains intact in case the main project proponent has to absorb the costs of political risks, delays, and other issues that usually hound these long-gestating but potentially profitable ventures.

However, the SM group had submitted two unsolicited proposals: its collaboration with Ayala for a toll-road construction project, as well as its partnership with Solar group’s All-Asia Resources and Reclamation Corporation to develop a $50-billion airport and economic zone at Sangley Point in Cavite.

“SM remains very focused on its core businesses. But now that the economy continues to grow, we think infrastructure is going to support our other businesses. This is why we are looking into those possibilities as well,” Frederic Dybuncio, chief executive officer of SMIC, told Rappler on the sidelines of a stockholders’ meeting in Pasay City early May.

Dybuncio stressed the SM group will only invest in an infrastructure deal if it directly influences the future of their current core businesses, especially foot traffic to their malls.

For instance, the elevated toll road proposal is meant to provide access to the Mall of Asia (MOA) Complex, one of its biggest integrated property developments. At the 60-hectare complex is a two-storey mall with 700 tenants, 6 office towers, concert grounds, a convention center, a sports arena, and most recently the 347-room Conrad Manila hotel. The elevated toll road, to be called the C3 Elevated Expressway (C3EX), would run 8.6 kilometers and start in Sta Mesa, Manila, where it would link to the Skyway Stage 3, and go all the way to the MOA Complex in Pasay City via Makati.

“We don’t look at infrastructure on its own because that is not our specialization. For example, this project with Ayala, it is really to bring traffic to SM Mall of Asia. That was really an incentive for us to be part of that project,” Dybuncio said.

For the Sangley airport proposal, it would provide traffic to SM developments in Cavite, including its 5 malls there. 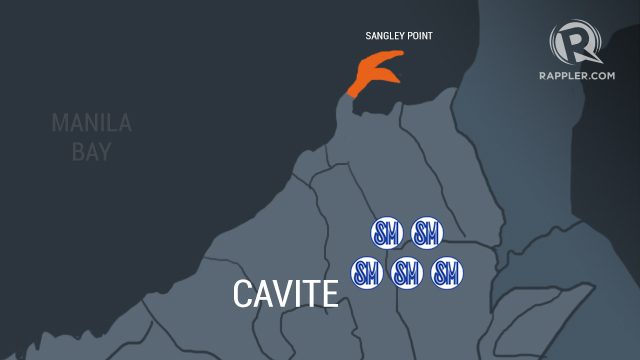 “Our sort of preference or interest will be if it is an infrastructure [project] that is going to help our other developments,” Dybuncio said.

The Sys’ formula – showing support for the current administration’s economic policies, focusing on core businesses, and minimizing exposure on regulated operations – has been proven effective for the SM group. The group’s financial performance over the past years proves it.

Real estate firm SM Prime contributed 39% to the company’s income last year, while the banking sector accounted for 37% and SM Retail at 24%.

Save for banking, gaming, and mining, the SM group is not involved in other regulated businesses, such as telecommunications, power, and water. Even its newest venture, logistics, is broadly unregulated.

For the 10th consecutive year, Henry Sy Sr topped Forbes’ list of richest Filipinos, with a 2017 net worth of $12.7 billion.

“As far as the economy is concerned, we have good growth and I think we will continue in the next few years,” Sy-Coson said in the conglomerate’s annual stockholders’ meeting.

From Carlos Garcia to Duterte and from World War II to the Asian financial crisis, the SM group has indeed stood the test of time. – Rappler.com