MANILA, Philippines (4th UPDATE) – No other man benefits more from the country’s brisk economic growth than Henry Sy Sr, whose fortune ballooned to a high of $18 billion, making him the Philippines’ richest man for the 10th consecutive year.

Even without the benefits of an election year, SM Investments Corporation sustained growth across its core property, banking, and retail businesses. The SM group, the Sy family’s business empire, saw its net income grow to P16.6 billion in the 1st 6 months of 2017. JG Summit Holdings Incorporated, the Gokongwei’s group’s holding firm, saw net profit stay flat in the first half of 2017 at P15.95 billion, with its
petrochemicals division standing out by growing revenues by 50%. Under Gokongwei’s holding firm is Cebu Pacific Air, Robinsons Mall, and Robinsons Land. Meanwhile, owing to Bloomberry Resorts Corporation, owner and operator of Solaire Resort and Casino, Enrique Razon Jr bagged the 3rd spot, with a net worth of $4.3 billion, from 2016’s $3.5 billion.

International Container Terminal Services Incorporated (ICTSI), the port operator of Razon, recorded a 24% surge in net income to $115.1 million in the 1st half of 2017, fueled by strong performance from overseas terminals and a one-time gain on the termination of its sub-concession agreement in Nigeria. Meanwhile, LT Group founder Lucio Tan maintained his 4th position in 2017, although his estimated net worth fell from $4.9 billion last year to $4.2 billion this year.

Tan’s LT Group is heavily involved in tobacco and alcohol which are under threat from higher sin taxes, while his airline, Philippine Airlines, is expected to announce a strategic partnership with a foreign airline in the coming months. Ayala Corporation has been on an investment spree this year, notably getting into e-commerce through Zalora, acquiring a British manufacturing firm, and betting on setting up its own infrastructure projects.

According to Forbes Asia, 7 of the 10 biggest dollar gainers in the list “have sizable interests in construction and property development,” banking on President Rodrigo Duterte’s ambitious infrastructure program Build, Build, Build. DMCI founder and chairman emeritus David Consunji gained 3 spots to land at 6th this year, from 9th in 2016, as his estimated net worth increased to $3.68 billion from $3.1 billion.

Consunji’s listed Semirara Mining and Power Corporation, the nation’s largest coal miner, has defied confusion in the mining sector to record a jump in net income growth of 24% to P4.46 billion in the 1st half of 2017. 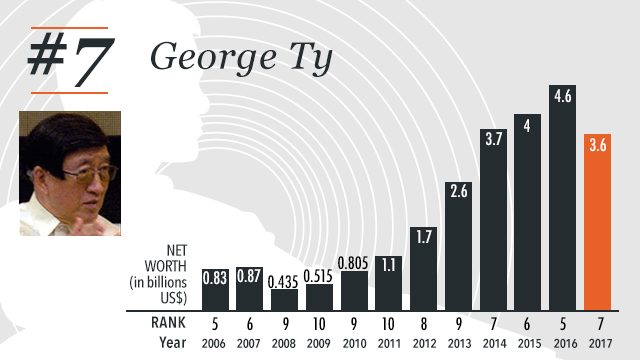 GT Capital founder and chairman George Ty dropped two places to 7th this year after seeing his estimated net worth lose a billion dollars to settle at $3.6 billion.

Ty’s Metrobank, the country’s second largest bank, hit the headlines last month after one of its own officials was accused of stealing P900 million. That however has not stopped GT Capital, which also has interests in the automotive industry, property development, power generation, and insurance, from growing its net income by 19% to P7.4 billion for the 1st half of 2017. Jollibee Foods Corporation (JFC) founder and chairman Tony Tan Caktiong fell two spots to 8th as his estimated net worth dropped from $4.3 billion in 2016 to $3.4 billion this year.

His JFC has been on an international expansion spree, buying US burger chain Smashburger and entering into a joint venture with Vietnam-based Superfoods Group. Last July, JFC also opened its 1,000th store in the Philippines. Alliance Global founder Andrew Tan gained a spot to hit 9th richest this year, although he saw his estimated net worth drop to $2.5 billion from $3 billion last year. Tan’s Travellers International Hotel Group took a big hit after its Resorts World Manila casino was attacked in June, resulting in 38 fatalities. Meanwhile, Ramon Ang almost doubled his net worth in just a year’s time to $2.3 billion (10th spot), from $1.21 billion in 2016 (16th spot). This was after his Eagle Cement Corporation saw a favorable initial public offering (IPO) in May, where its share price jumped two percent to close at P15.30 from its IPO price of P15 piece, as the company expects market share to hit 25% over the next two to 3 years. Eleventh in the list is the husband-and-wife tandem, Lucio and Susan Co. They started their venture with a hypermarket in 1998 in Mandaluyong City. Today, they own over 300 Puregold Price Club stores. The husband and wife also have interests in gaming, hotels and wine distribution, Forbes Asia said. Manuel Villar is the chairman of a leading mall operator Starmalls and one of the largest local homebuilders Vista Land & Landscapes. His family also owns Golden Haven Memorial Park, which went public in June 2016. Ricardo Po Sr founded Century Pacific Food Incorporated, one of the country’s leading exporters of tuna products. The company also bought a major stake in fast food restaurant Shakey’s Pizza, which made its debut on the local bourse in December last year. Betty Ang runs Monde Nissin, one of the largest food manufacturers in the country. The company is best known for its brand of “Lucky Me” instant noodles. From being last year’s biggest gainer, DoubleDragon’s Edgar “Injap” Sia II is one of the biggest losers on this year’s list, falling to the 21st spot, from last year’s 17th spot. Sia is no longer among the billionaires, with a net worth of $820 million. Beatrice Campos is the wife of the late Jose Campos, who together founded United Laboratories Incoprated – one of the country’s largest drug manufacturers. Her family also holds a stake in global food and beverage manufacturer Del Monte Pacific Limited. Carlos Chan leads the food and beverage firm Liwayway Marketing Corporation, best known for its Oishi-branded products. Aside from his snack company, Chan has also ventured into property with Sia to set up Chinese hotel chain JinJiang Inn in the Philippines. Alfredo Yao, who is known as the Philippines’ “juice king,” runs the publicly-listed  Macay Holdings Incorporated and privately-help Zest-O Corporation. He also has a sizeable stake in the Philippine Business Bank.

This year’s newcomer is STI Education Systems Holdings Incorporated chairman Eusebio Tanco, which ended at 45th spot with a net worth of $150 million. Shares in STI more than doubled over the past year due to increased demand for certain courses like information and communication technology. – with research from Sofia Tomacruz/Rappler.com