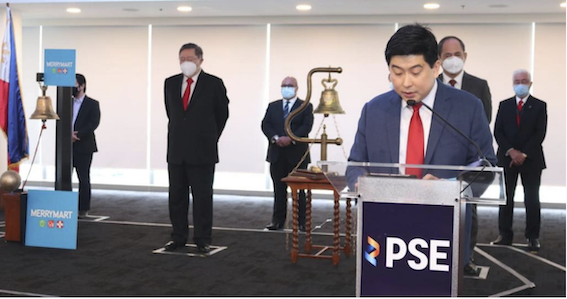 MANILA, Philippines – Shares of Merry Mart Consumer Corporation (MerryMart) zoomed to the maximum daily price ceiling on its debut in the Philippine Stock Exchange (PSE) on Monday, June 15, despite market uncertainties due to the coronavirus pandemic.

Shares of the convenience store operator went up by 50% from P1 to P1.50, and were among the most actively traded stocks during the trading day.

Led by businessman Edgar “Injap” Sia II, MerryMart is the first to conduct an initial public offering (IPO) in 2020 amid the coronavirus crisis and the Philippines plunging into a recession. (READ: Philippine economy shrinks for first time in 22 years)

The company is listed on the small, medium, and emerging board of the PSE. It initially aimed to be listed on the PSE’s main board.

“Some people may ask, why continue to conduct an IPO in the middle of this pandemic? Well, if you really analyze, many of the most successful businesses around the world [were] either started during a crisis, or [have] deepened [their] market grip during the crisis period,” Sia said.

MerryMart, which opened just in 2019, raised some P1.6 billion from the IPO.

Sia aims to open 1,200 branches nationwide and has set an ambitious revenue goal of  P120 billion.

“Why do an IPO at a very early stage of the company?, Well if you really analyze – this is how a normal IPO works: start a company, grow it rapidly for 10 to 20 or 30 years, then do an IPO,” Sia said.

“And now the here is the reverse, the abnormal way to do an IPO: to list when [the] company is still small on its first few years, then bring along investors – mostly retail ones – to be with you during the hypergrowth years. That way you share the value of the company to tens of thousands of many small other investors that you don’t know.”

The 43-year-old billionaire is the chairman of DoubleDragon Properties, another publicly listed company. Sia was also the founder of Mang Inasal, but he sold his 70% stake to Jollibee in 2011, which made him the youngest Filipino billionaire at that time.

Sia noted that DoubleDragon also did an “abnormal IPO” in 2014, when its assets were less than P600 million. Now, DoubleDragon’s assets stand at over P113 billion.

Finance Secretary Carlos Dominguez III, who was at the listing ceremony, said the IPO “signals trust” in the country’s economic aspects.

“It shares in the optimism that, notwithstanding the global downturn engulfing us today, the Philippine economy has the fundamentals to rise quickly from the devastation wrought by the pandemic,” Dominguez said.

The PSE index, however, ended in the red on Monday, losing almost 5%. – Rappler.com