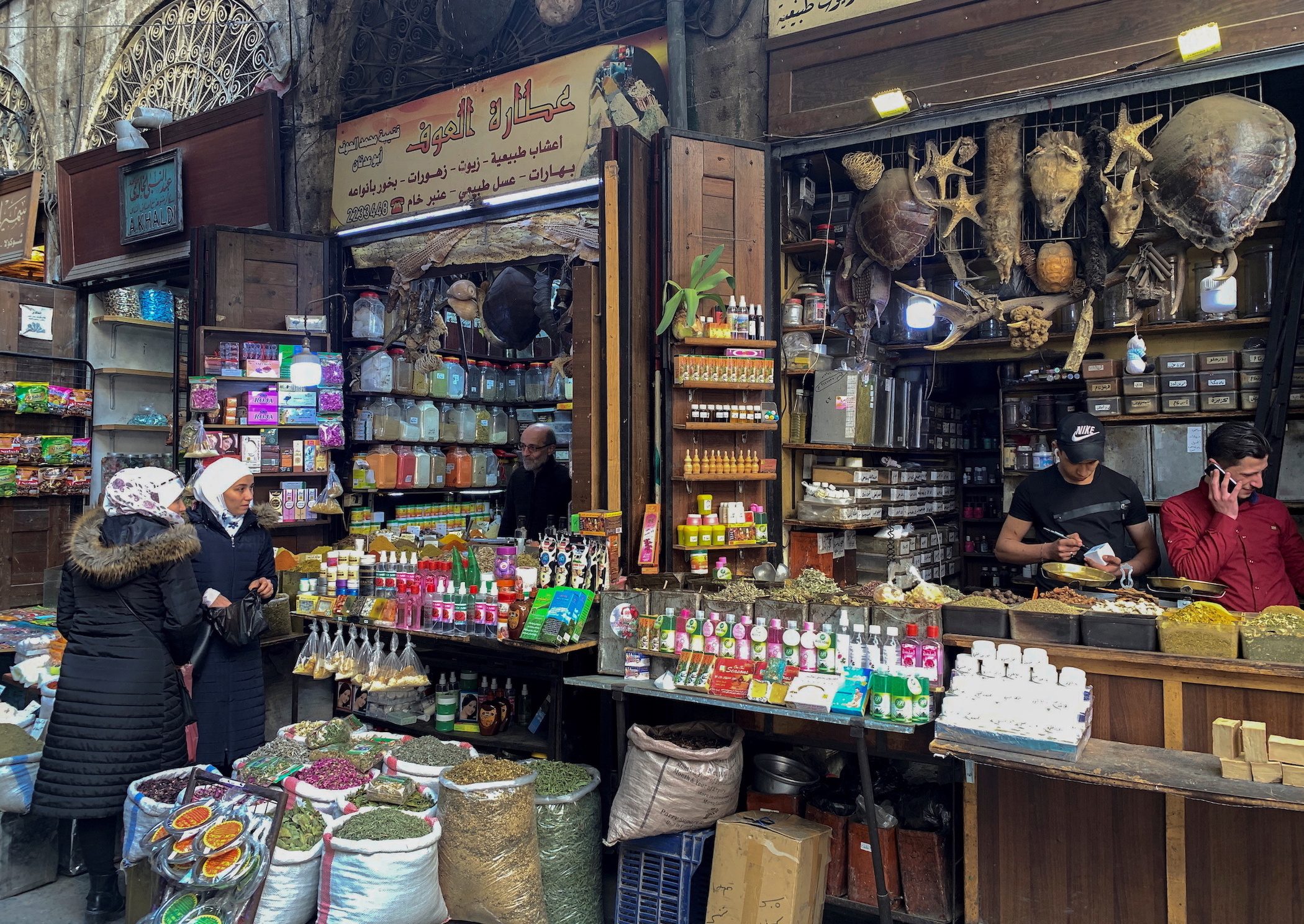 SYRIAN MARKET. People shop for herbs and spices at a market in the old city of Damascus, Syria, February 28, 2021.

In the back alleys of the old city of Damascus, Yaseen al-Obeid carries sacks of bricks to make some extra cash and supplement his monthly foreman’s salary of $15.

Like many other Syrians, one job is not enough; the 52-year-old has to find money to feed his wife and 6 children.

“Every time I go to bed I say to myself that I hope a rocket comes and kills me and rids me of this life,” he told Reuters via video link from his home in a run-down part of the Syrian capital.

Obeid’s problems are common among the estimated 17 million people left in Syria after a decade-long civil war that decimated the economy, killed hundreds of thousands of people, and displaced more than 11 million, or around half the pre-war population.

President Bashar al-Assad, who with the help of Russian and Iranian forces has all but crushed the insurgency, faces a challenge that may be just as daunting – rebuilding a country from the rubble when economic headwinds are gaining strength.

The country is not yet at peace. Hostile Turkey controls territory in the northwest where many of the 4 million people who fled Assad’s bombing see Ankara as their protector.

The United States has a small military presence in the northeast that underpins Kurdish forces in a region where major oilfields are located and much of the country’s wheat was grown.

“You don’t have sources of foreign currency, neither oil nor wheat – all of it we are paying from scarce hard currency. The government’s resources are limited,” said leading Damascus-based Syrian businessman Khalil Touma.

The government did not respond to questions about its economic record and about dissatisfaction over people’s worsening financial situation.

In televised speeches over the last year, Assad has blamed Western sanctions for Syria’s economic woes, and late in 2020 also pointed to the Lebanese banking crisis that has frozen Syrian depositors out of their accounts.

A cumulative total of $226 billion in gross domestic product was lost due to the civil war from 2011 to 2016, according to the World Bank.

More recently, purchasing power has collapsed along with the Syrian pound, which began to slide in late 2019 and hit a new low of 4,000 to the dollar this month.

A new 5,000 Syrian pound note issued in January was a reminder to some of the threat of hyperinflation, although the government said that was not the reason for the new note.

The pound’s fall has wiped out much of Obeid’s income. His salary was worth far more when it traded at 47 to the dollar before the conflict.

What hurts most is hearing his children tell him they go to bed hungry.

“My son tells me ‘I have not filled my stomach.’ They sleep without eating.”

The country’s food subsidy system used to supplement Obeid’s salary, guaranteeing cheap bread. But cracks have begun to show, with residents saying that queues for bread across government-controlled areas can run up to 5 hours long as wheat imports dwindle.

Witnesses said fights had broken out, although open dissent against the authorities is still relatively rare amid fears that they will crack down to quell it.

The government did not respond to questions about whether it sought to stifle dissent.

Memories are still fresh of how peaceful protests in 2011 were met with deadly force, fueling an insurgency against Assad’s government that became a multi-sided war.

Another uprising against him looks unlikely, ahead of elections later in 2021 which he appears certain to win.

The government has reduced bread and gasoline allowances in an attempt to cut waste, but some businessmen say not all of its economic policies are working.

“There are a lot of decisions taken by the government that actually put up obstacles rather than make matters easier,” Touma said.

In Damascus, some residents say that signs of economic strain are everywhere, including beggars and homeless people roaming the streets of more affluent areas.

Meanwhile, the lifestyle of Syria’s elite appears relatively untouched behind the gated compounds of Yafour neighborhood close to the Damascus-Beirut highway.

Smart restaurants are teeming with customers.

“There is extreme spending on luxuries by a group who pay in foreign currency…. This is not the time,” Touma told Reuters.

Some have lost thousands of dollars of savings they invested in banks in Lebanon, once a safe haven amid war and sanctions.

Garment trader Ibrahim Shahloub used to go to Beirut regularly to collect the interest on his savings and keep his family afloat.

With Lebanon’s banks freezing depositors out of their accounts as the country went into financial meltdown, he cannot access his money.

“The only hope we had was to go to Europe and we did not. The hope has gone, it has died, it has been buried,” he said.

Salary increases for war veterans and the military establishment cannot keep up with spiraling prices, and even in Jabla in the Mediterranean province of Latakia – an Assad family stronghold – some Syrians say they are unhappy.

Iskander Najoum, a former fighter for a pro-Assad militia, has adorned his walls with pictures of the leader and a fallen brother Ali. He talks with pride about Assad’s visit to his hometown last October after it was hit by forest fires.

But despite the veneration, Najoum is angry with officials he says have stolen funds meant to compensate farmers for the fires that swept the coastal province, the worst in decades.

“How are we going to fight corruption and bribery? How can an employee live on 60,000 pounds?” asked Najoum, who lost his left hand in the fighting. “Is this our reward for standing up to terrorism for 10 years and giving everything?”

The government did not respond to a question about people’s perception of corruption among officials.

Rare protests over eroding living conditions in government-controlled areas fizzled out last year, but frustration remains over dwindling supplies of bread and fuel.

Keeping a tight lid on dissent is a priority ahead of presidential elections, Syrians familiar with official thinking said.

Some activists say fear of arrest has already muzzled a once vocal social media, after dozens of students, civil servants, a judge, and prominent journalists were detained for speaking out about poor living conditions and alleged corruption.

In a recent case, Hala Jerf, 54, a prominent television presenter and longtime supporter of Assad, was arrested at a checkpoint near Damascus in January on her way to work after she posted Facebook posts critical of the government.

“Putting the spotlight on corruption and the corrupt is a bigger crime than corruption itself,” said Rajaa Jerf, Hala’s sister.

The government did not immediately respond to a request for comment on Jerf’s case.

Suhaib Ibrahim, a former university student, joined peaceful demonstrations and later fought for the rebels after losing his mother and sister in airstrikes on Jobar, 2 kilometers northeast of the old city walls of Damascus.

He, for one, saw little chance of renewed protests.

“They have not changed anything and things only got much worse,” he said. “We paid dearly.” – Rappler.com