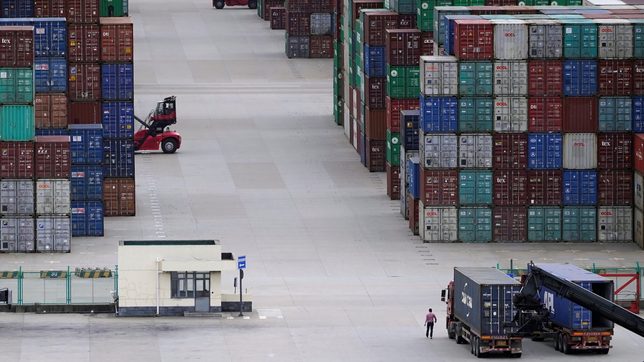 SHIPMENTS. Containers are seen at the Yangshan Deep-Water Port in Shanghai, China, October 19, 2020.

Australian Prime Minister Scott Morrison has pointed to strong trade with China as evidence of a valuable relationship despite Chinese criticism, as Australia’s main opposition party accused him of using alarmist rhetoric for domestic gains.

Bilateral ties have sunk to their lowest point in decades, and China has in recent months moved to restrict imports of Australian products such as barley, wine, and beef after Morrison led calls for a global inquiry into the origins of COVID-19.

But Morrison said sales of other commodities illustrated the relationship had not broken down.

“The relationship still exists, look at trade alone – there have never been bigger volumes. That’s a bit of a proof point. When all’s said and done, there’s still great value in the relationship,” Morrison told the Sydney Morning Herald newspaper in an interview.

China is Australia’s largest trading partner. In the 12 months to March, Australia exported A$149 billion ($116 billion) worth of goods to China, down 0.6% from the previous year. Exports, however, have been supported by strong prices for iron ore, the largest single item in trade with China.

China’s foreign ministry spokesman Zhao Lijian responded by saying that China “has always held that health and stable China-Australia relations are in the fundamental interests of both countries.”

However, Zhao, speaking at a regular news briefing in Beijing, said the responsibility for the decline in relations was “not at all China’s” and that Australia should treat China with “objectivity” and “rationality.”

“My concern is that not only does he not fully comprehend Australia’s interests in relation to China, he doesn’t even seek to,” she said at a book launch on Wednesday, May 19.

Labor has previously largely backed the government’s more assertive stance towards Beijing, but recent warnings from government officials raising the possibility of a conflict with China have weakened that unity.

“The first job of national leaders is the safety of their citizens. Our leaders do not make us safe by beating the drums of war with China,” Wong said.

Some academics have also called for a change to Australia’s 2018 foreign interference laws, which then Prime Minister Malcolm Turnbull said was aimed squarely at China, as well as new powers to cancel agreements struck between Australian states and foreign governments.

The government in April used the 2020 legislation to cancel an agreement between Victoria state and China linked to its grand infrastructure plan called the Belt and Road Initiative.

China Matters, a Sydney-based think tank that has been critical of policy towards China, said the laws were too broad and should be narrowed when a parliamentary committee examines the legislation later this year. – Rappler.com