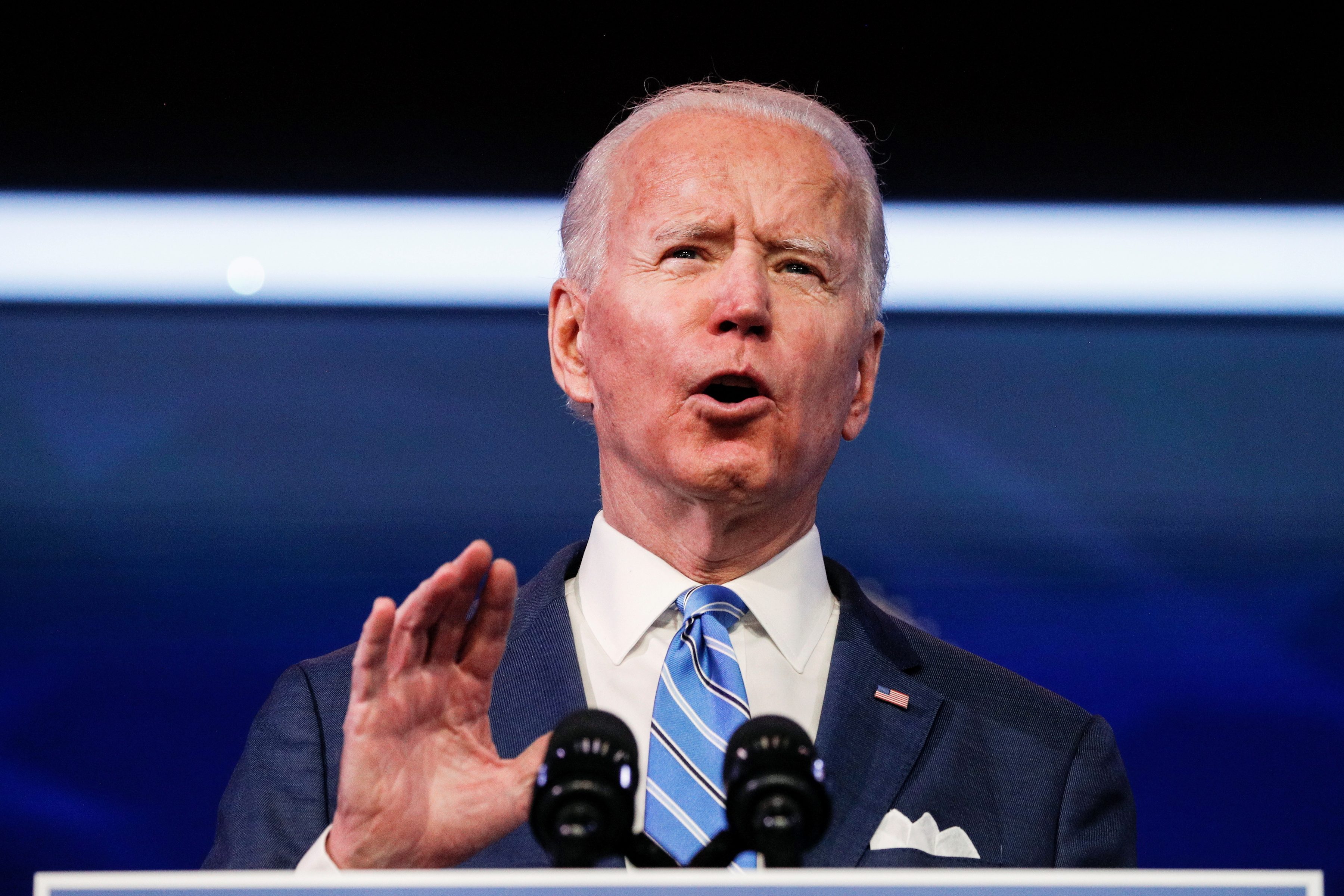 ECONOMIC PLAN. US President-elect Joe Biden delivers remarks during a televised speech on the current economic and health crises at The Queen Theatre in Wilmington, Delaware, January 14, 2021.

President-elect Joe Biden outlined a $1.9-trillion stimulus package proposal on Thursday, January 14, saying bold investment was needed to jump-start the economy and accelerate the distribution of vaccines to bring the coronavirus under control.

Biden campaigned last year on a promise to take the pandemic more seriously than President Donald Trump, and the package aims to put that pledge into action with an influx of resources for the coronavirus response and economic recovery.

“A crisis of deep human suffering is in plain sight, and there’s no time to waste,” Biden said in prime-time remarks from Delaware. “We have to act and we have to act now.”

The aid package includes $415 billion to bolster the response to the virus and the rollout of COVID-19 vaccines, some $1 trillion in direct relief to households, and roughly $440 billion for small businesses and communities particularly hard hit by the pandemic.

Stimulus payment checks would be issued for $1,400 – on top of the $600 checks delivered by the last congressional stimulus legislation. Supplemental unemployment insurance would also increase to $400 a week from $300 a week now and would be extended to September.

Biden’s plan is meant to kick off his time in office with a large bill that sets his short-term agenda into motion quickly: helping the economy and getting a handle on a virus that has killed more than 385,000 people in the United States as of Thursday.

It also provides a sharp contrast with Trump, who spent the last months of his administration seeking to undermine Biden’s election victory rather than focusing on additional coronavirus relief. Trump, who leaves office on Wednesday, January 20, did support $2,000 payments to Americans, however.

Many Republicans in Congress balked at the price tag for such payments.

Biden will face similar hurdles with his proposals, which come on the heels of a $900-billion aid package Congress passed in December.

But he will be helped by the fact that his fellow Democrats will control both the House and the Senate.

Chuck Schumer, who is about to lead a narrow Democratic majority in the US Senate, and House Speaker Nancy Pelosi said on Thursday that Biden’s package was “the right approach” and pledged to begin working on legislation.

The incoming president will seek to pass the legislation even as his predecessor faces an impeachment trial.

The Democratic-led House of Representatives voted to impeach Trump on Wednesday, January 13, making him the first president in US history to be impeached twice. Ten of his fellow Republicans joined Democrats to charge him with inciting an insurrection in last week’s deadly rampage at the Capitol.

The impeachment proceedings threaten to hang over the beginning of Biden’s term, and Biden has encouraged lawmakers to handle the trial while also moving forward with his agenda.

Transition officials said Biden’s plan will be a rescue package that will be followed up with another recovery package in the coming weeks.

The plan would extend moratoriums on foreclosures and evictions until September and include funding for rental and utility assistance.

The president-elect also called on Congress to increase the minimum wage to $15 an hour, and the package will include assistance to fight hunger.

“I know what I just described does not come cheaply, but failure to do so will cost us dearly,” Biden said, adding that economists, financial institutions, and Wall Street banks supported the need for stimulus.

“If we invest now – boldly, smartly, with unwavering focus on American workers and families – we will strengthen our economy, reduce inequality, and put our nation’s long-term finances on the most sustainable course.”

The coronavirus relief-related funds will go toward a national vaccine program, testing, investments for workers to do vaccine outreach and contact tracing, and money for states.

“The vaccines offer so much hope…but the vaccine rollout in the United States has been a dismal failure thus far,” Biden said, adding that on Friday, January 15, he would set out his plan to vaccinate 100 million Americans in 100 days after taking office.

“This will be one of the most challenging operations efforts we’ve ever undertaken as a nation. We’ll have to move heaven and earth to get more people vaccinated.”

Pandemic-related shutdowns and restrictions have cost millions of US jobs. The Biden plan – if enacted – would buy more time for the economy to bridge the period until the distribution of vaccines allows for a wider resumption of economic activity.

US equity index futures were little changed after Biden’s speech, details of which emerged during Thursday’s trading session.

“It’s one piece in the overall puzzle,” said Jake Dollarhide, chief executive at Longbow Asset Management in Tulsa, Oklahoma. “It bridges the gap to getting restaurant workers, airline workers, and other employees back to work.” – Rappler.com