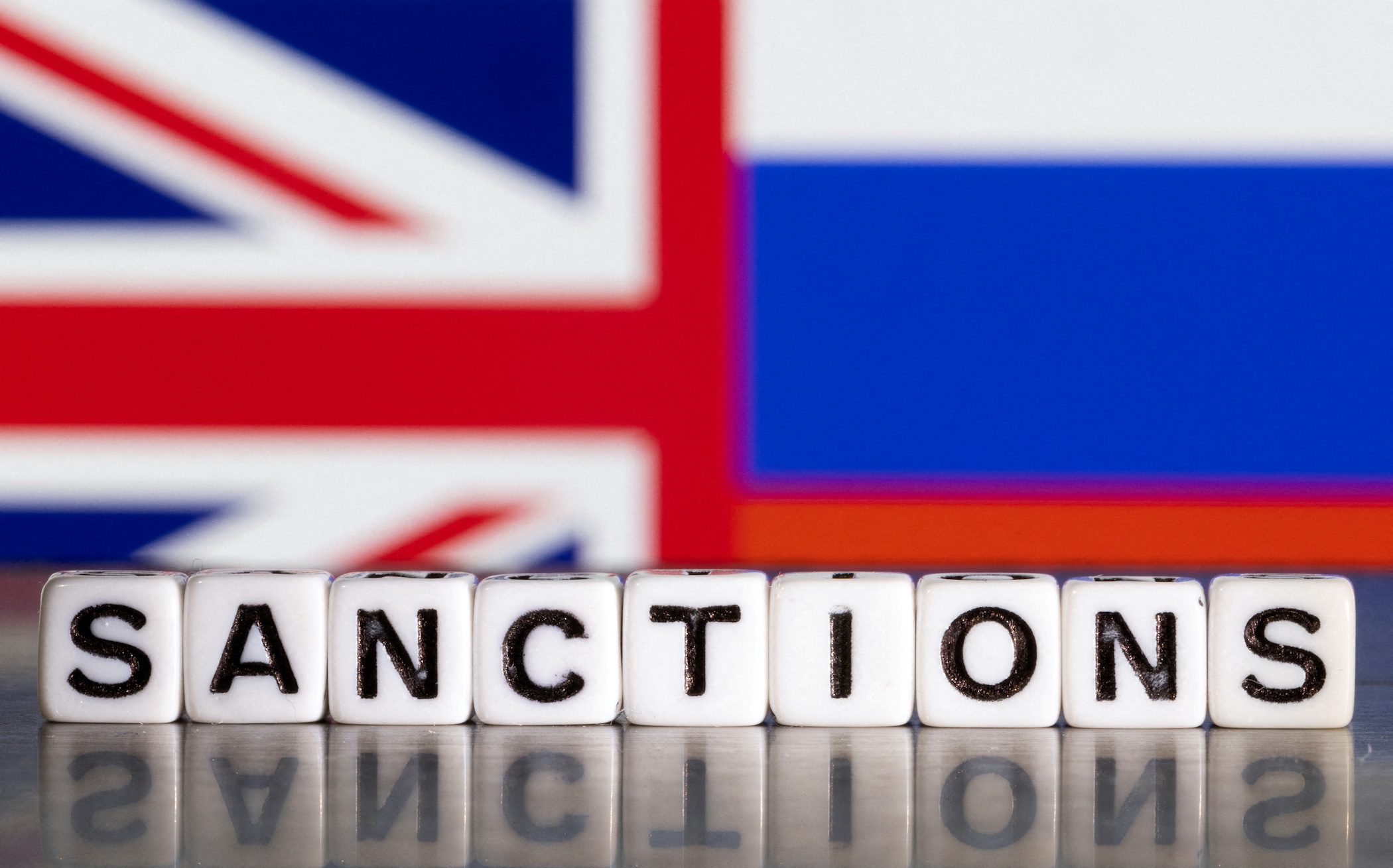 SANCTIONS. Plastic letters arranged to read 'Sanctions' are placed in front of the Union Jack and Russian flag colors in this illustration taken February 28, 2022.

Facebook Twitter Copy URL
Copied
'We will keep going with sanctions until Putin fails in Ukraine. Nothing and no one is off the table,' says British Foreign Secretary Liz Truss

LONDON, United Kingdom – Britain on Thursday, April 14, sanctioned two close associates of Chelsea owner Roman Abramovich in response to Russia’s invasion of Ukraine, saying the men had been subjected to the largest asset freeze ever imposed by the government.

Chelsea Football Club director Eugene Tenenbaum and another Abramovich business associate, David Davidovich, were targeted. Davidovich will also face a travel ban, meaning he will be refused the right to enter or remain in Britain.

The government said it had imposed a freezing order on $10 billion worth of assets linked to the two men, who were being sanctioned for their close association with Abramovich, who was among several wealthy Russians added last month to British and European Union sanctions.

“We are tightening the ratchet on [Russian President Vladimir] Putin’s war machine and targeting the circle of people closest to the Kremlin,” British Foreign Secretary Liz Truss said. “We will keep going with sanctions until Putin fails in Ukraine. Nothing and no one is off the table.”

Abramovich has previously denied having close ties to Putin.

On February 24, Tenenbaum, a director of Chelsea who is described on the club website as one of Abramovich’s “closest associates,” took full control of Ervington Investments Limited, which invested in at least eight firms, including Russia’s top search engine Yandex.

Ervington has served as an investment vehicle for Abramovich for at least eight years. It was among investors who put $600 million into Yandex in 2020 and who put money into Via, a ride-sharing app.

Tenenbaum last month told Reuters his company had purchased Ervington Investments in compliance with all laws and regulations, because it is a company he has worked with for many years. The firm was transferred again last month to Davidovich.

Tenenbaum, 57, was born in Ukraine when it was part of the Soviet Union and has been on Chelsea’s board for 19 years. He was previously the head of corporate finance at Sibneft, a Russian oil company sold in 2006 by Abramovich.

Tenenbaum told Reuters last month that he did not agree with the way Abramovich has been publicly characterized and he hoped the sanctions imposed on him would be reassessed.

The British government said when it sanctioned Abramovich that he had been a close ally of Putin for decades.

Abramovich also moved another company, Norma Investments, to Davidovich on the first day of Russia’s attack on Ukraine.

Norma owned stakes in renewable-fuel and biotech companies, according to corporate filings.

Britain was initially slower than the United States and the EU to impose sanctions on Russia following its invasion of Ukraine in February, but has been gradually stepping up following weeks of fighting.

The Royal Court of Jersey imposed a formal freezing order on $7 billion worth of assets linked to Abramovich on Thursday.

Abramovich had sought to sell Premier League soccer club Chelsea before he was sanctioned, but that process was taken out of his hands by the British government after his finances were blacklisted. – Rappler.com