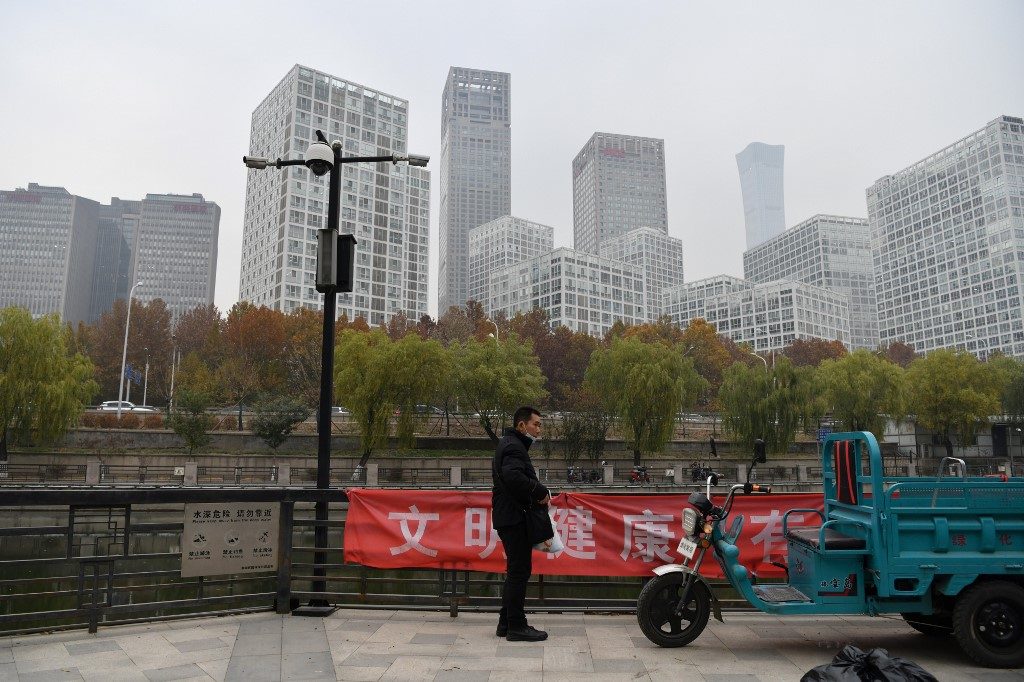 CHINESE ECONOMY. A man stands beside a canal near the central business district in Beijing on November 16, 2020.

China’s retail sales continued a general recovery in October, official data showed on Monday, November 16, on the back of a national holiday and policies aimed at boosting spending.

Although China has largely brought the coronavirus under control, spending has been slower to recover as the world still grapples with the impact of the pandemic.

At a press briefing, spokesman Fu Linghui said the pandemic “has dealt a second blow to countries” including the United States and those in Europe, and that global recovery had “further stalled” as a result.

“The domestic economy is still in recovery, with multiple challenges to be conquered before a full recovery,” Fu added.

While the retail figure is lower than the 5% growth expected by analysts polled by Bloomberg, it still continued an upward trend as spenders gradually began to open their wallets again, particularly around the weeklong national holiday in October.

Research firm Oxford Economics said China’s recovery is on a “reasonably firm footing and will continue in the 4th quarter.”

Industrial production growth in October remained the same as the month before, but continued to rise more than expected at 6.9%.

A strong rebound in exports could have helped industrial output, said Rajiv Biswas, Apac chief economist at IHS Markit, adding that there was also potential for a pre-Christmas boost.

Meanwhile, the urban unemployment rate – a key concern with a large number of graduates entering the market this year after the pandemic hit – fell to 5.3% in October.

The NBS added that over 10 million new urban jobs have been created this year, meeting China’s annual target ahead of schedule, although analysts have cautioned the real unemployment figure could be higher.

But Nomura’s chief China economist Lu Ting warned on Monday that headwinds remain, with the possibility of some social virus restrictions extending into spring 2021 and earlier pent-up demand losing steam.

At a forum last week, China’s ex-finance minister Lou Jiwei suggested trade tensions between the world’s two biggest economies could continue even under the administration of President-elect Joe Biden. – Rappler.com