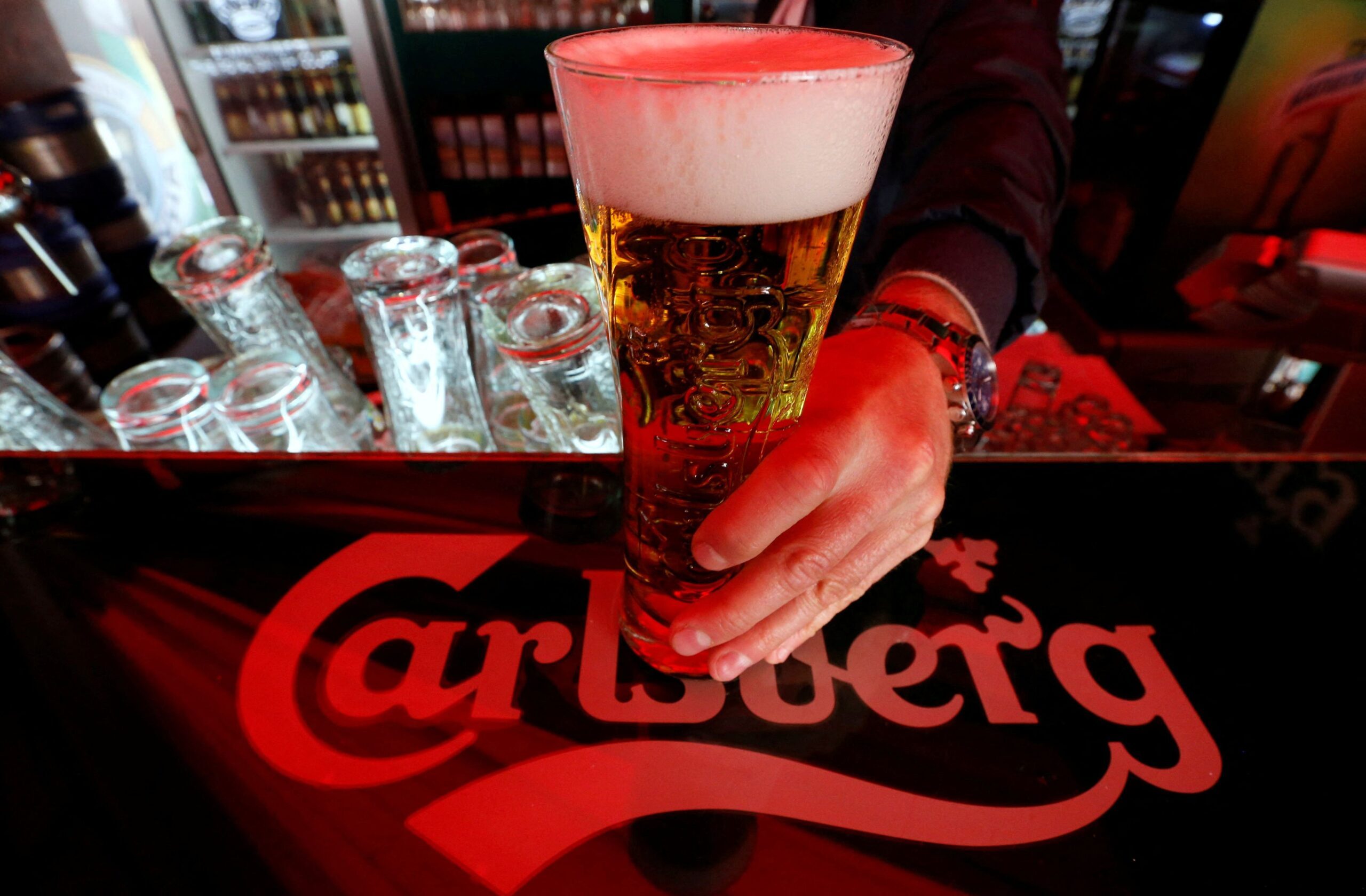 CARLSBERG. A bartender holds a glass of Carlsberg beer at a bar in Saint Petersburg, Russia, June 17, 2014.

Facebook Twitter Copy URL
Copied
Affected companies include Carlsberg, which halted production at all three of its breweries in Ukraine, and Coca-Cola HBC, which shut its bottling plant

Danish brewer Carlsberg and a Coca-Cola bottler shut their plants in Ukraine on Thursday, February 24, following Russia’s invasion while firms making goods from jet engines to semiconductors warned that supplies of key raw materials could suffer.

Carlsberg, which has a 31% share of Ukraine’s beer market, halted production at all three of its breweries in the country, while Coca-Cola HBC said it had triggered its contingency plans which included shutting its bottling plant.

Britain’s biggest domestic bank Lloyds, meanwhile, warned that it was on heightened alert for cyberattacks from Russia while companies operating in Ukraine were looking at how to shield their staff from the conflict.

Russian forces invaded Ukraine by land, air, and sea on Thursday, confirming the worst fears of the West with the biggest attack by one state against another in Europe since World War II.

Many companies with significant exposure to Russia said they were still waiting to see the full force of Western sanctions before deciding on any action, although backers of the suspended Nord Stream 2 gas pipeline were already taking a hit.

Washington imposed sanctions on the company behind Nord Stream 2 on Wednesday, February 23, and European Union leaders are meeting later on Thursday to decide what punitive measures they will impose as retribution for Russia’s attack.

Shares in German utility Uniper, which has power plants in Russia and a $1-billion exposure to Nord Stream 2, plunged on Thursday and its controlling shareholder, Finland’s Fortum, took a knock.

Another of Nord Stream 2’s financial backers, Wintershall Dea, said the suspension of the project on political grounds would enable its operator to seek compensation.

Shares in German chemical company BASF, which co-owns Wintershall with Russian billionaire Mikhail Fridman’s LetterOne investor group, were down 5.6% while other Nord Stream 2 backers OMV and Engie were also lower.

Danish freight forwarder DSV said it had shut down its operations in Ukraine, where it employs about 230 people, while CNH Industrial told Italian newspaper La Republicca it had given staff money and access to cars to reach safe zones.

“Today, all air traffic has stopped and the border crossings are also impacted and closed so in reality everything is shut down today,” DSV’s head of investor relations Flemming Ole Nielsen said, adding that expected sanctions were likely to have a “major impact” on overall trade in Eastern Europe.

Other international companies with staff in Ukraine such as Swiss consumer goods giant Nestle said they were monitoring the situation closely and the safety of staff was their highest priority.

Nestle has been in Ukraine for more than 25 years and has three factories and about 5,000 employees there.

Jet engine makers Rolls-Royce and Safran both said on Thursday they had been ramping up supplies of titanium as Western aerospace companies brace for fallout from the Ukraine crisis.

Titanium, much of it supplied by Russia, has been used in jet engines for decades but its use has soared in recent years as planemakers try to make jets lighter.

“We have been watching this situation for several weeks and have decided since the start of the year to increase our stocks of titanium especially through distributors in Germany,” Safran chief executive Olivier Andries told reporters.

The French company is also looking to diversify its sources of the metal, as was Britain’s Rolls-Royce, which said 20% of its titanium came from Russia.

Large chip companies said they expected limited supply chain disruption from the conflict for now, thanks to stockpiling and diversified procurement, but some industry sources said there could be an impact longer term.

Ukraine supplies more than 90% of US semiconductor-grade neon, critical for lasers used in chipmaking. The gas, a by-product of Russian steel manufacturing, according to market research firm Techcet, is purified in Ukraine. – Rappler.com