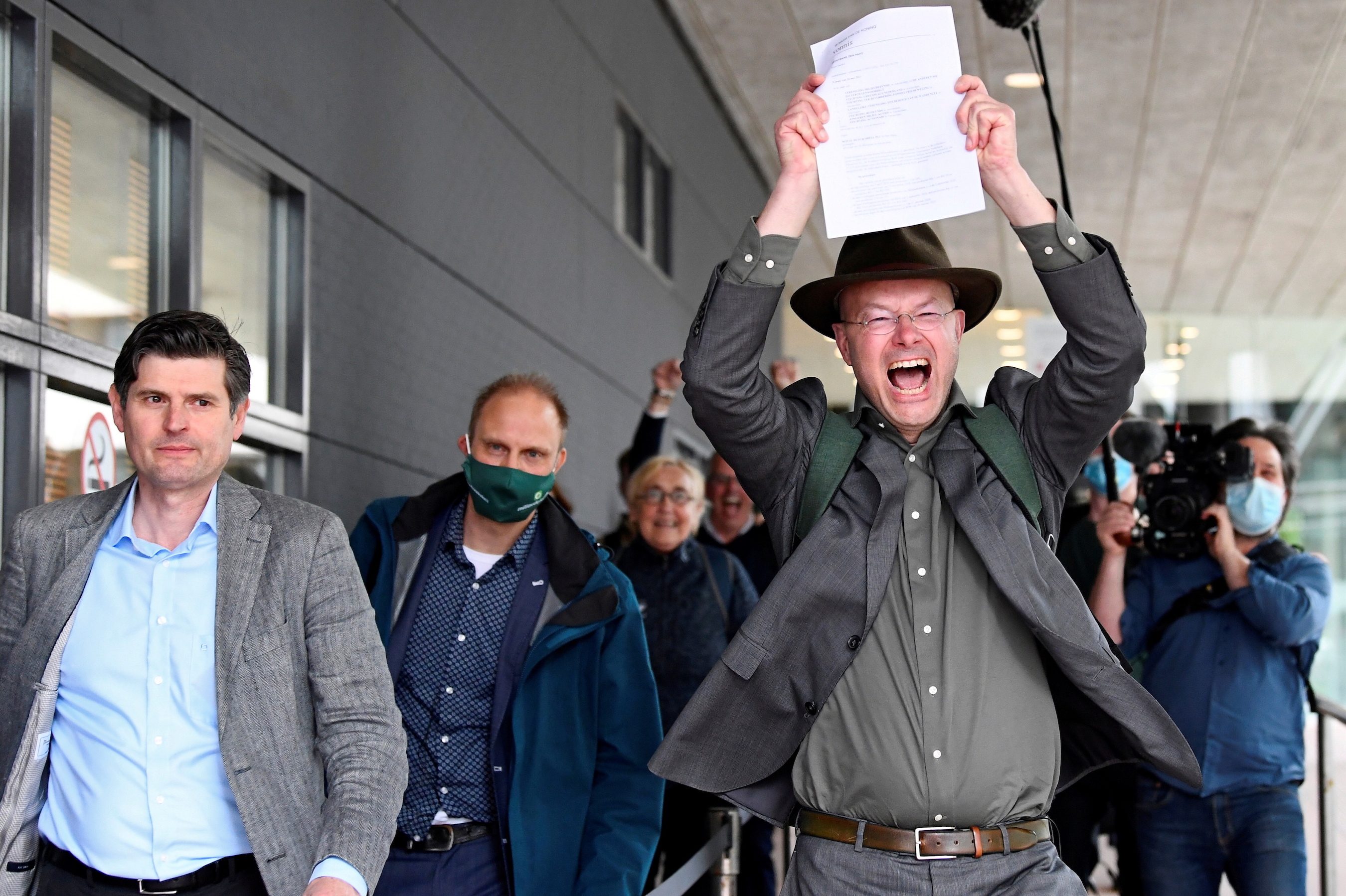 LANDMARK RULING. Donald Pols, director of Milieudefensie (Friends of the Earth), reacts holding a copy of a verdict in a case brought on against Shell in The Hague, Netherlands, May 26, 2021.

A Dutch court on Wednesday, May 26, ordered Royal Dutch Shell to significantly deepen planned greenhouse gas emission cuts, in a landmark ruling that could pave the way for legal action against energy companies around the world.

Shell immediately said it would appeal the court ruling, which comes amid rising pressure from investors, activists, and governments on energy companies to shift away from fossil fuels and rapidly ramp up investments in renewable energy.

At a court room in The Hague, judge Larisa Alwin read out a ruling which ordered Shell to reduce its planet warming carbon emissions by 45% by 2030 from 2019 levels.

“The court orders Royal Dutch Shell, by means of its corporate policy, to reduce its C02 emissions by 45% by 2030 with respect to the level of 2019 for the Shell group and the suppliers and customers of the group,” Alwin said.

But the court said that Shell’s climate policy was “not concrete and is full of conditions…that’s not enough.”

“The conclusion of the court is therefore that Shell is in danger of violating its obligation to reduce. And the court will therefore issue an order upon RDS,” the judge said.

The court ordered Shell to reduce its absolute levels of carbon emissions, while Shell’s intensity-based targets could allow the company to grow its output in theory.

“This is arguably the most significant climate change-related judgment yet, which emphasizes that companies and not just governments may be the target of strategic litigation which seeks to drive changes in behavior,” said Tom Cummins, dispute resolution partner at law firm Ashurst.

Shell said that it would appeal the verdict and that it has set out its plan to become a net-zero emissions energy company by 2050.

Shares in its London-traded stock were down 0.7% at 1427 GMT, compared with 0.8% gains in the broader European energy sector.

The lawsuit, which was filed by seven groups including Greenpeace and Friends of the Earth Netherlands, marks a first in which environmentalists have turned to the courts to try to force a major energy firm to change strategy.

It was filed in April 2019 on behalf of more than 17,000 Dutch citizens who say Shell is threatening human rights as it continues to invest billions in the production of fossil fuels.

“This is a huge win, for us and for anyone affected by climate change,” Friends of the Earth Netherlands director Donald Pols told Reuters.

“It is historic, it is the first time a court has decided that a major polluter has to cut its emissions,” Pols added.

Michael Burger, head of the Sabin Center for Climate Change Law at Columbia Law School, said that “there is no question that this is a significant development in global climate litigation, and it could reverberate through courtrooms around the world.”

Burger is also a lawyer representing local governments in the United States in climate change lawsuits, including against Shell.

Shell, which is the world’s top oil and gas trader, has said its carbon emissions peaked in 2018, while its oil output peaked in 2019 and was set to drop by 1% to 2% per year.

While its climate targets surpass those of its US rivals such as Exxon and Chevron, which ignore emissions from the combustion of its fuels, the Anglo-Dutch company’s spending will remain tilted towards oil and gas in the near future.

A rapid reduction in its carbon dioxide emissions would effectively force it to quickly move away from oil and gas. – Rappler.com