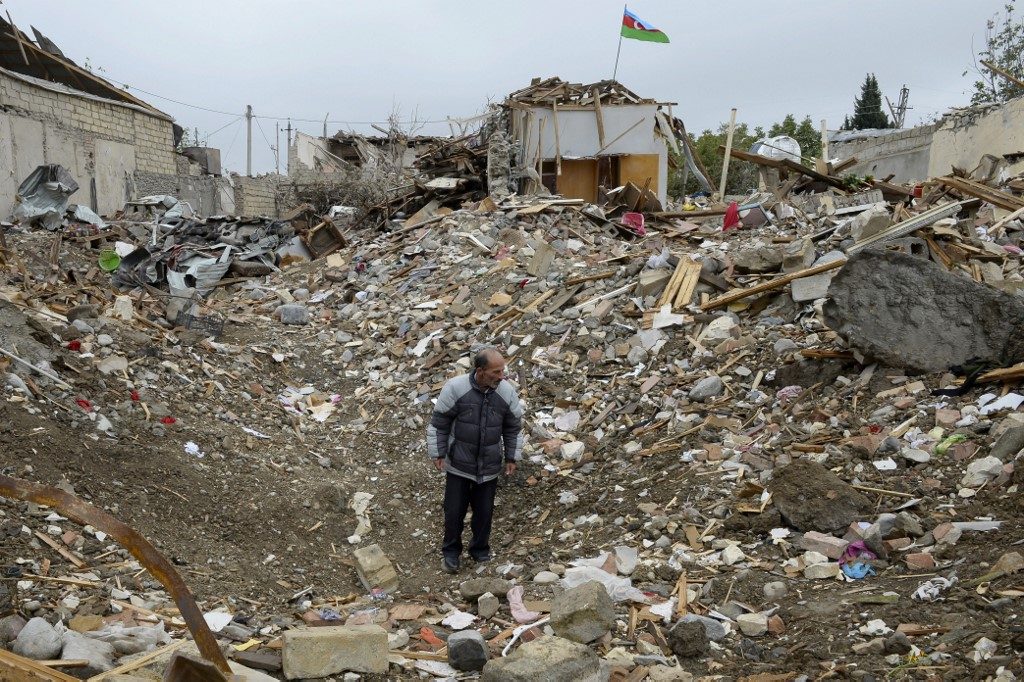 A man stands among the debris of a destroyed house hit by a rocket strike during the ongoing military conflict between Armenia and Azerbaijan over the breakaway region of Nagorno-Karabakh, in a residential area of the city of Ganja, Azerbaijan, on October 21, 2020. (Photo by TOFIK BABAYEV / AFP)

Heavy fighting between oil-rich Azerbaijan and its impoverished, landlocked neighbor Armenia over the disputed Nagorno-Karabakh region is dealing a major blow to their economies, already battered by the coronavirus pandemic.

The Armenian-populated region of Nagorno-Karabakh broke away from Azerbaijan in a 1990s war and has remained under the control of ethnic-Armenian separatists backed by Yerevan.

It has a small but fast-growing economy which was worth $710 million in 2019, according official figures cited by the RBK Russian business news website.

Over the last decade it registered an average annual growth rate of around 10%, RBK reported.

More than the half of the enclave’s budget consists of subsidies from Armenia and generous donations from the Armenian diaspora, funds which have sparked a construction boom.

If Azerbaijan recaptures Karabakh, Armenia would lose important local infrastructure and hundreds of millions of dollars it pumped into the region’s economy over decades.

Armenia’s economy is expected to shrink by at least 10% this year – against 4% growth projected prior to the COVID-19 pandemic, analyst Tatul Manaseryan told Agence France-Presse.

“There is no infrastructure [in Karabakh] that escaped being damaged: gas, water, electricity…hydroelectric facilities, and mining structures,” he said, adding that the human cost of the fighting “will be the main [economic] burden” for the land of some 3 million people.

“There will be a deficit of qualified workforce. Young engineers and scientists are going to the front. It will be a demographic challenge.”

The clashes in Karabakh that erupted on September 27 are the deadliest since the 1994 ceasefire and have so far claimed more than 900 lives.

The mining sector – copper, gold, precious stones – is the backbone of Karabakh’s economy.

The Armenian group Vallex, which operates mines in the Martakert district close to the frontline, said it was forced to shut down its Kachen mining complex, which is the region’s largest employer and taxpayer.

Another important source of revenues are Karabakh’s hydropower plants which produce electricity both for local consumption and for export to Armenia.

Azerbaijan has claimed it took control of one of Karabakh’s main hydroelectric plants, Khudaferin, on the border with Iran.

Energy-rich Azerbaijan pumps crude and natural gas from the Caspian Sea to Europe via pipelines that bypass Russia.

The supplies reduce Europe’s dependence on Russian energy, which the Kremlin has sought to leverage as a geopolitical tool against the West.

The Baku-Tbilisi-Ceyhan oil pipeline – operated by Western companies such as British Petroleum, the US’ Chevron, and Norway’s Statoil – connects Azerbaijan to Turkey via Georgia.

The Baku-Tbilisi-Erzurum gas pipeline operated by BP is expected to be linked with Italy by the end of the year.

Both pipelines are within the firing distance of Karabakh, and Azerbaijan has said its air defenses shot down Armenian missiles targeting them – a claim Yerevan has denied.

A disruption in energy exports would deal a heavy blow to Azerbaijan’s economy, which has suffered from falling oil prices.

“The pipelines are laid two meters underground, so there is protection there from material damage,” analyst Swapnil Babele of Rystad Energy, an independent energy research and business intelligence company.

Babele added that if Armenian troops capture territory that pipelines cross through, this would represent “a potential threat to oil and gas exports in the region.”

Any disruption would also have an impact on Turkey, which is linked to Azerbaijan by energy delivery and transit contracts.

The decades-long Karabakh conflict has been the major obstacle for the economic integration of the 3 South Caucasus countries – Armenia, Azerbaijan, and Georgia.

It is also likely to have scared away foreign investors and negatively affect “both countries’ credit…and investment ratings,” said US-based professor and economist Gubad Ibadoghlu.

He added that efforts by Armenia and Azerbaijan to maintain competitive armies weighs heavily on their budgets.

The region’s poorest country, Armenia, is also sidelined from all the major energy and transit projects in the Caucasus region, noted Azerbaijani economist and opposition leader Natig Jafarli.

“The military expenditure of the two countries could be devoted to the social protection of the population and to the development of the economy,” he said. – Rappler.com