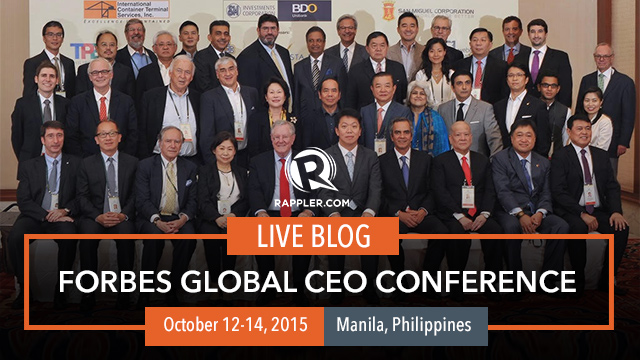 This year’s theme, “Toward a Winning Vision,” focuses on visionary leadership or how leaders at the helm of great companies conceive and articulate vivid visions that capture the imagination of their teams, inspire confidence among investors, and win the hearts and minds of consumers.

Among some 50 prominent global business leaders invited as speakers, 5 of them are Filipino tycoons, namely: 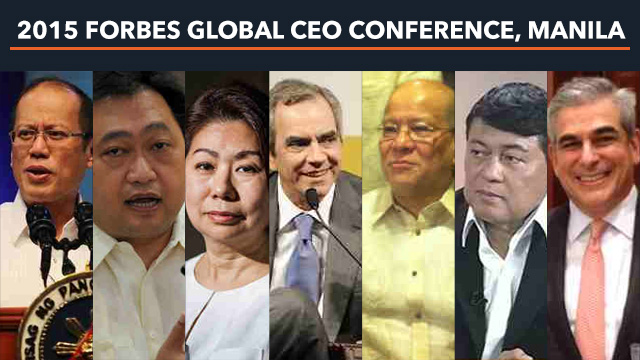 President Benigno S. Aquino III will engage in “A Meeting of Minds” – a one-on-one dialogue with Steve Forbes, chairman and editor-in-chief of Forbes Media, to discuss global economic issues at the finale and grand closing of the conference on October 14. (READ: Aquino leads speakers of 15th Forbes Global CEO Conference in Manila)

Finance Secretary Cesar V. Purisima will join the opening panel on October 13 on “The Search for Growth,” which will look at where new growth come from; how will trends play out in the political sphere around the world; how should CEOs and investors assess these and other trends. (Check here for the rest of the 3-day conference’s program.)

The opening night reception and gala dinner is on October 12, with Steve Forbes leading session 1, “Fact and Comment.” Panels officially start on October 13.

On the evening of October 13, a musical gala will entertain the delegates, with performances by seasoned and globally-known Philippine artists Arnel Pineda, Kuh Ledesma, Radha, and Zsa Zsa Padilla; accompanied by El Gamma Penumbra, Buganda, Danoy and Makiling.

Delegate attendance at the Forbes Global CEO Conference is by invitation only, limited to qualified titles (usually chairman, vice chairman, CEO, and President from global headquarters) and is at the discretion of Forbes.

The conference participation fee is $8,000, inclusive of the costs of all conference sessions; social events organized as part of the conference agenda: and conference documentation. The fee though does not include travel and accommodation costs.

Conference sessions will be held  at the Solaire Grand Ballroom and delegates are required to be in business attire (jacket and tie). Business casual (jacket, no tie) is the required attire for the reception and entertainment program at The Theater at Solaire. Members of the media accredited to cover the conference are also advised to dress appropriately.