Jul 1, 2016 2:02 PM PHT
Chris Schnabel
Facebook Twitter Copy URL
Copied
'The DOF can no longer use its fancy calculations to continue its detachment from the everyday lives of Filipinos. We need to do our job a little differently, a little more creatively,' says new Finance Secretary Carlos Dominguez 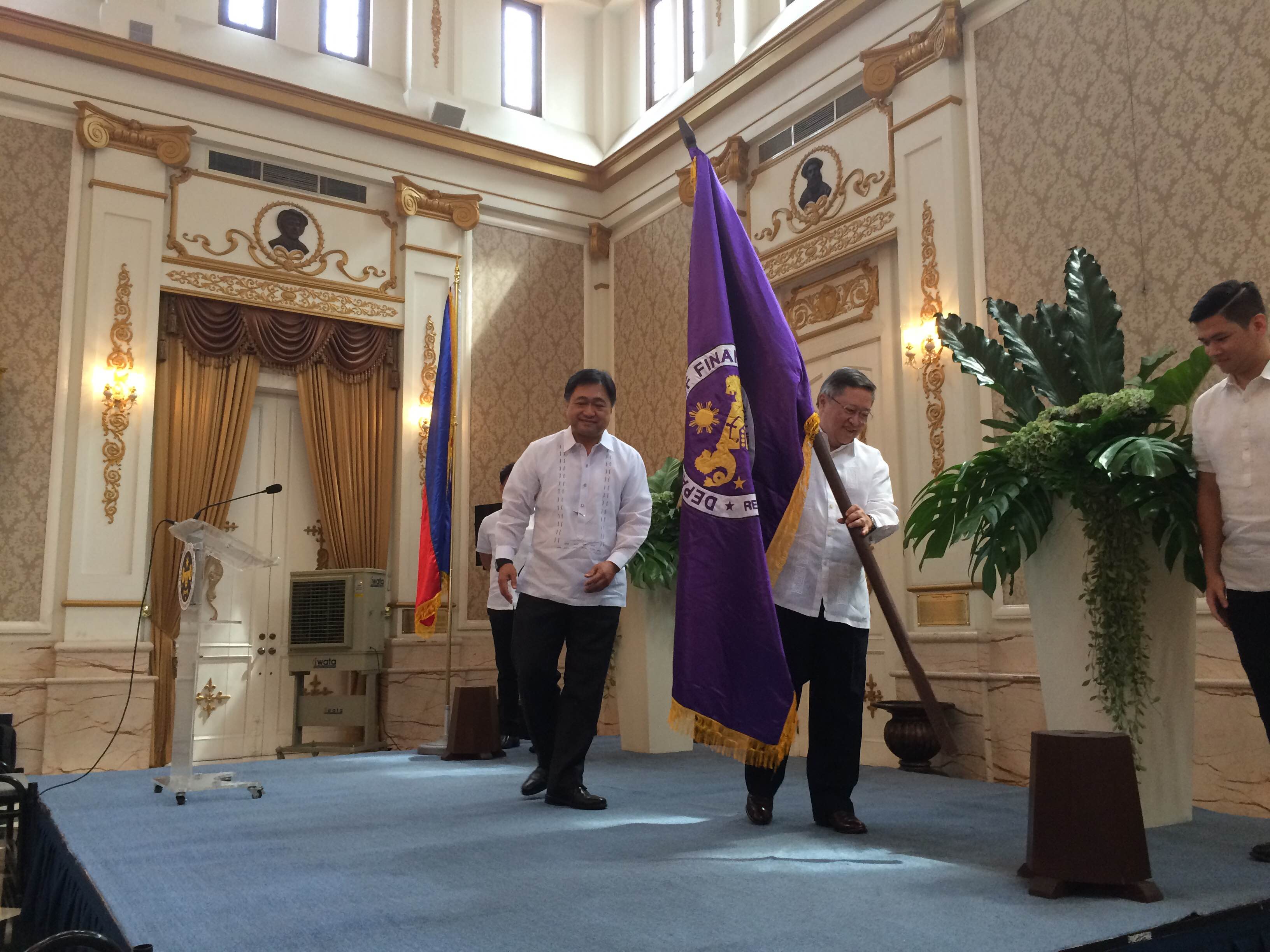 MANILA, Philippines – On his first day in office, Finance Secretary Carlos Dominguez gave these marching orders to his team: do work a “litte more creatively” to ensure that economic growth is inclusive.

Dominguez gave his first set of directives at the Department of Finance turnover ceremony at the Bureau of Treasury building in Intramuros on Friday, July 1, where his predecessor, Cesar Purisima, formally handed him the reins of the department.

“The DOF can no longer use its fancy calculations to continue its detachment from the everyday lives of Filipinos. We need to do our job a little differently, a little more creatively,” Dominguez said in his speech.

He expressed confidence that the DOF “has the talent and the commitment to eventually flesh out these general points and deliver a government capable of empathy” – an indirect swipe against the previous administration.

While universally acknowledged for sustaining high economic growth throughout its term – even propping up the Philippines as the fastest-growing economy in the region in the first quarter of this year – the Aquino administration had been criticized for lacking empathy for public concerns.

The Duterte campaign anchored itself on the promise of change through a government that responds to the people’s needs.

“A major reason why our people decided to vote out the old and vote in a new administration is that certain sense that government has lost touch with our citizens. We save and refuse to spend to shore up our credit ratings – long after it has become unnecessary to do so,” Dominguez said.

“Our first responsibility [at the DOF] is to help deliver an economy that works for our people’s betterment. If we can raise taxes and feed all our people at the same instant, that will be the best of all worlds. If we cannot, then let us feed our people first,” he added.

Dominguez said that the country has “gone through over two decades of fiscal forced marches and debt restructuring.”

“Our people deserve a break. We need to figure out what will reduce the quantum of misery our people endure and then work backwards from there,” he said.

Dominguez added that the DOF should also ensure “sufficient revenue flow to look after the social protection needs of our people.”

Dominguez pointed out a few things that the DOF would need to pay attention to, among them adjusting tax rates, which was among the promises of the Duterte campaign.

“We need to quickly adjust our tax rates to bring them closer to reality as our people expect that and it is good for business,” he said.

He also pointed out that the need for “dramatic changes” in the two main revenue agencies, the Bureau of Internal Revenue and the Bureau of Customs.

These changes, he said, “have to do with the simplification of procedures, improved automation, and enhanced facilitation…which will reduce corruption and enable us to serve our client better.”

Both agencies have fallen short of their most recent targets. Customs, in particular, missed the mark by almost P2 billion.

Dominguez pointed out that this creativity will be specifically channeled into finding ways to lower the tax rates and spending more.

For the tax rates adjustments, he said the DOF will present a package of proposed measures to Congress by September.

The incoming administration has already committed to adjust the tax tables on both income and corporate tax. Dominguez said he would review the existing tax exemptions.

“We have to review a lot of things. For example, our VAT is 12% and we collect 4.2% of GDP in VAT while finance is 7%. So why do we have that big difference? Perhaps it’s because we have a lot of exemptions. Our corporate tax is the highest in the region and yet it seems like we collect the lowest corporate income tax in the region. Again, it might be because we have too many exemptions so we have to review those,” he said.

Adjustments on the spending side, he added, “will be to refocus on the priorities of the Duterte administration, which are bringing up our spending to 5% of GDP and spending it more on infrastructure projects outside Metro Manila.”

The finance chief said the new government will also review the Personal Equity Retirement Act or PERA Law which encourages citizens to save for their retirement by giving them a tax break now.

“Apparently it is not working as we are not getting more savings. Our citizens have to be encouraged to save money and invest it in the capital markets,” he said.

Dominguez, however, also gave due credit to Purisima and the Aquino economic team for doing “an excellent job managing the debt crisis and restoring fiscal discipline.”

“Because of that, we now find ourselves in an enviable position where the country has the luxury of investing in the many crying needs of our country today,” he said.

For his part, Purisima said in his speech that on the part of the Aquino administration, “I hope that together, we’ve run a good race, and that we have taken the Philippines so much farther than when we first began.”

He also thanked Dominguez for returning to public service, since “with him at the helm of our nation’s economy, our prospects as Asia’s rising star has only become brighter.”

“As we navigate a path forward in the turbulent waters of the global economy, I am happy Secretary Dominguez is the captain of our economy’s ship, the bearer of our fiscal torch, and our next champion in the great relay race of good governance,” said Purisima. – Rappler.com