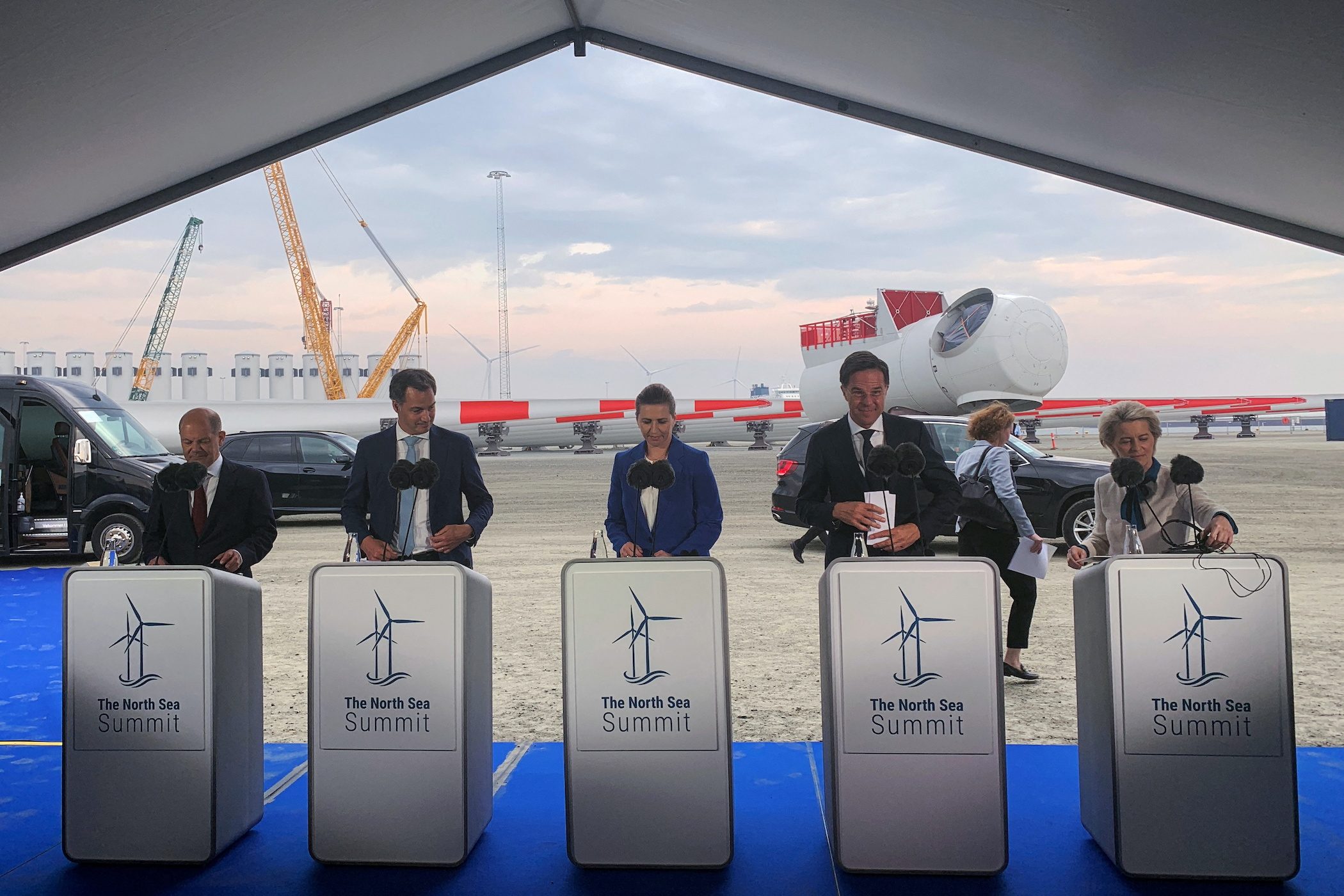 Northern European countries are discussing plans to create a common power grid under the North Sea to connect future offshore wind farms as they seek to strengthen energy security, but the ambitious proposal faces financing and regulatory challenges.

European nations have announced pledges to build dizzying amounts of offshore wind farms, spurred partly by the need to cut heavy reliance on Russian oil and gas in the wake of its invasion of Ukraine.

“The more interdependent we become in Europe, the more independent we will become from Russia,” European Commission President Ursula von der Leyen told reporters during a visit in May to the Danish port of Esbjerg, used by top wind turbine makers Vestas and Siemens Gamesa.

“We all know green power generation is great. But if you really want to use it, you need a grid and there, we have to step up,” she said.

It is, however, unclear how huge amounts of green power can be exchanged across borders without overloading already strained onshore grids or creating a spaghetti bowl of cables on the seabed.

An idea being looked at are offshore grids, with new wind farms connected to hubs, or energy islands, and linked by interconnecting power cables that supply several European markets instead of just one.

Danish grid firm Energinet is already discussing connecting two energy islands in the Danish parts of the North and Baltic Seas with Germany and Belgium.

There are also talks with Norway, the Netherlands, and Germany about future projects, said Hanne Storm Edlefsen, who is in charge of developing energy islands at Energinet.

Denmark, the Netherlands, Germany, and Belgium announced plans in mid-May to build 150 gigawatts of offshore wind capacity by 2050, up from just around 15 GW today, a tenfold jump.

“What is completely new is that we see the build-out of renewables as something which is done best jointly,” Danish Climate and Energy Minister Dan Jorgensen told Reuters.

“A lot of those meteorological phenomena, like wind, have a tendency to travel over Europe – you see them passing from the Irish Sea over the North Sea and towards the Baltic,” he told Reuters.

An energy hub at sea also allows for wind power produced to remain offshore until it is needed by consumers onshore.

This avoids overloading the grid on land, a common issue with Germany routinely paying Danish wind producers to turn their wind turbines off for a while to limit imports and avoid straining its grid.

Still, creating a meshed grid will take at least a decade to build and will probably cost more than a double-digit billion-dollar amount, industry sources told Reuters.

There is one hybrid cable in operation in Europe to date, connecting several wind farms in the Baltic Sea to both Denmark and Germany, operated by Energinet and German grid operator 50Hertz, of which Elia owns 80%.

Hybrid projects combine generation and transmission elements and connect two or more markets while existing offshore wind farms have traditionally sent their power to shore via individual cables to a single country.

It is also unclear who will invest and develop these projects which involve several countries and, in some cases, include non-EU member Britain.

“The big problem is that all parties must have the incentive to join the development of hybrid projects and that is not currently the case,” Ulrik Stridsbaek, head of regulatory affairs at Orsted.

Current regulation does not allow for the necessary sharing of costs and revenue that would incentivize all parties to invest, he said.

Despite this, Orsted, which has built roughly a quarter of the world’s wind farms at sea, sees hybrid projects as crucial to unlock offshore wind’s future potential.

“We think that hybrids can be a huge saving of time, money, and hassle,” Stridsbaek told Reuters.

Several more hybrid interconnectors are planned across Europe, but the key hurdle is the lack of a clear European regulatory framework, according to Giles Dickson, head of industry lobby group WindEurope.

“It doesn’t make sense to continue building out offshore wind towards the huge volumes governments are now committing to, if you try to do it only through point-to-point, radial grid connections,” he told Reuters.

Still, these may be the go-to solution in the short term as Europe seeks a quick build-out of its offshore wind capacity to replace Russian fossil fuels, said Soeren Lassen, a researcher at Wood Mackenzie.

“I am not sure whether the meshed grid will be the solution in the short term in the 2020s,” he told Reuters.

WindEurope’s Dickson argues there needn’t be a delay if the European Commission said what regulation could look like.

“It can be done very quickly if the political will is there,” he said. “It’s not rocket science.” – Rappler.com