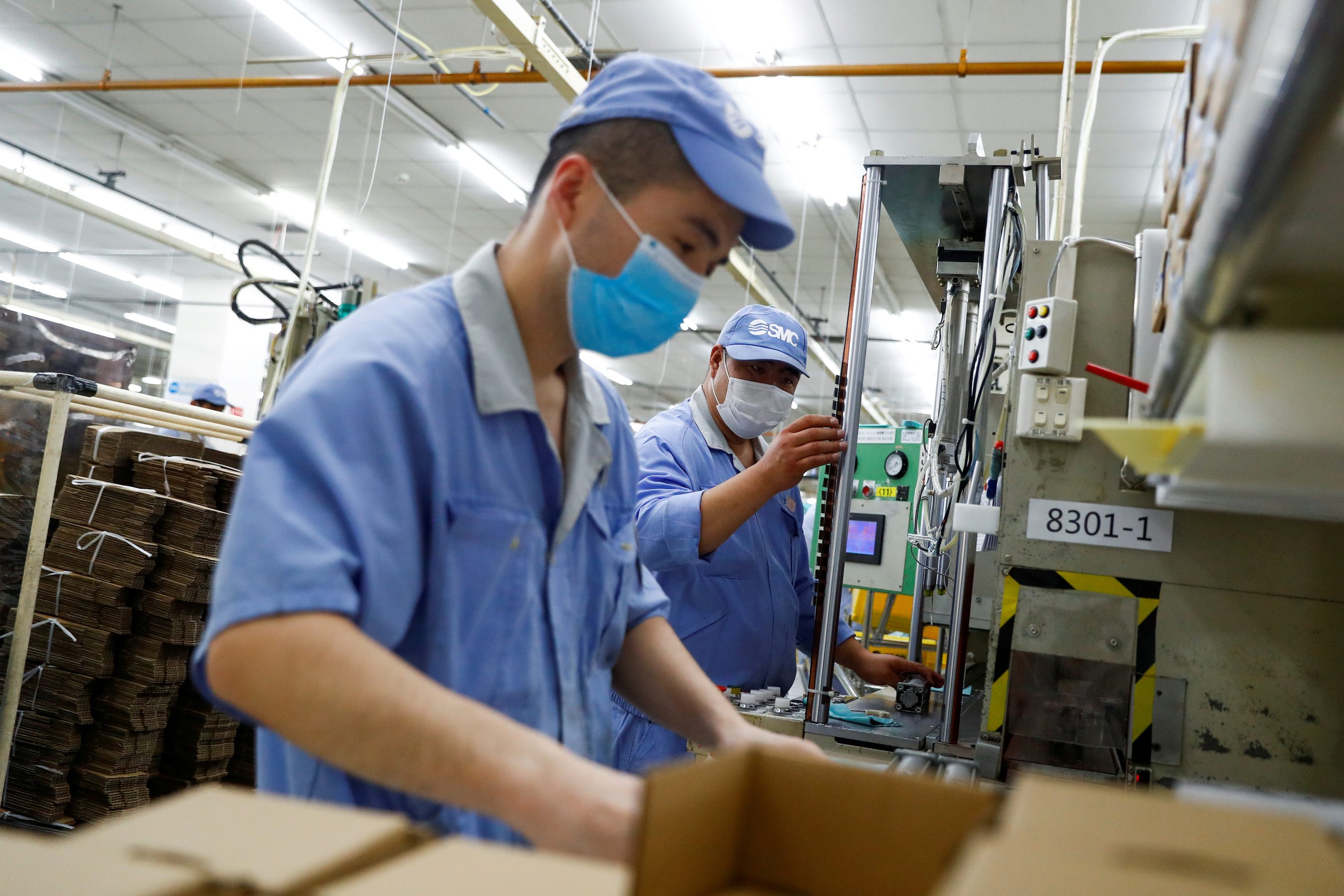 MANUFACTURING. Employees work at a factory of component maker SMC during a government-organized tour of its facility in Beijing, China, May 13, 2020.

Global manufacturing activity remained resilient in January although some countries suffered amid a resurgence in coronavirus infections, underscoring the fragile and uneven nature of the economic recovery.

Factories across parts of Europe, as well as in China and Japan, struggled as renewed lockdown measures alongside supply shortages hurt activity, surveys showed.

With coronavirus infections soaring again, countries have forced vast swathes of their service industries to shut their doors, leaving manufacturing to support economies as factories have largely remained open.

“In general manufacturing is doing okay. You see some supply side constraints coming through, but production and new orders are still growing quite strongly,” said Claus Vistesen at Pantheon Macroeconomics.

“Manufacturing is still offering support and it will continue to do so.”

In the euro zone, IHS Markit’s final Manufacturing Purchasing Managers’ Index (PMI) fell to 54.8 in January from December’s 55.2, although that was a touch above the initial 54.7 “flash” estimate. A reading above 50 indicates growth.

A gauge of British manufacturing growth was at its slowest in 3 months in January as the combined impact of COVID-19 and Brexit weighed on new export orders and there were signs of disruption of supply chains.

Factories in Germany, Europe’s biggest economy, had been humming along during the pandemic on higher demand from abroad but also suffered from increasing supply delays and another hard lockdown.

But in other parts of Europe activity accelerated, with France, Italy, the Netherlands, Switzerland, and some countries in the east of the continent recording stronger numbers.

Factory activity quickened in major chip exporters South Korea and Taiwan, as they benefited from continued brisk demand for semiconductors crucial to work-from-home IT goods.

But China’s manufacturing activity expanded at the slowest pace in 7 months in January, weighed down by falling export orders.

“PMI readings for Asia suggest that manufacturing sectors improved further in most places. Buoyant global demand for electronics should continue to support the sector for at least the next few months,” said Alex Holmes, emerging Asia economist at Capital Economics.

Takeshi Okuwaki, an economist at Dai-ichi Life Research Institute in Tokyo, said Japanese manufacturers may slash output as the state of emergency will unavoidably hurt the economy.

“A shortage of chip supply will take time to fix, which will also weigh on Japan’s automobile production,” he said.

That was in stark contrast to South Korea, where factory activity rose at its fastest pace in a decade thanks to soaring exports.

Separate data showed South Korea’s exports jumped 11.4% in January from a year earlier to mark a 3rd straight month of gains due in part to surging sales of memory chips.

In India, factory activity expanded at its strongest pace in 3 months, fueled by a continued recovery in demand and output.

Manufacturing activity in Indonesia increased at a faster pace and activity stopped contracting in the Philippines but shrank in Malaysia and rose at a slower pace in Vietnam, PMI data showed.

But recovery hopes are being dampened by a sharp increase in COVID-19 cases as authorities impose lockdown measures to curb the spread of the virus in the country’s north. – Rappler.com