Greece to reopen 6 ports to cruise ships on August 1 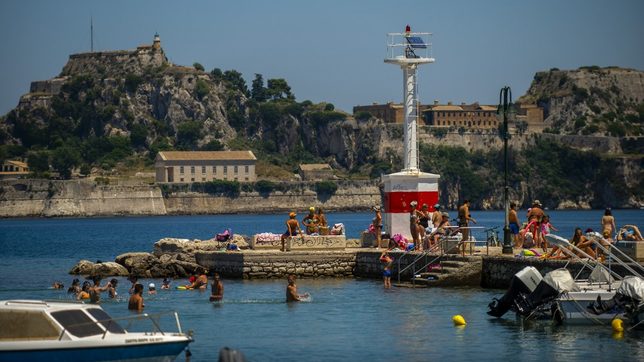 People swim near a pier in the island of Corfu on July 1, 2020 as the island welcomes its first tourists after months of closure due to the spread of the Covid-19 disease caused by the novel coronavirus. - Greece on July 1, 2020 reopened flights to its flagship island destinations as it raced to salvage a portion of the annual tourism season that is vital to its economy. (Photo by ANGELOS TZORTZINIS / AFP)

Greece will reopen 6 of its ports, including Piraeus in Athens, to cruise ships on Saturday, August 1, for the first time in the coronavirus-shortened tourism season, the tourism minister said.

After docking at one of these ports, cruise ships will subsequently be able to travel elsewhere in Greece, depending on local coronavirus conditions, he said.

With a quarter of the economy dependent on tourism, Greece has sought to capitalize on its relatively low infection rate to bring in visitors.

So far officials have announced nearly 4,200 infections and 202 deaths.

Last month, Greece began progressively reopening its land borders to select countries, before allowing mostly European flights to all its airports on July 1.

Since then, there have been over 340 confirmed infections among nearly 1.3 million incoming travelers, the civil protection agency said on Tuesday.

But demand is lagging.

Greek hotels are about a fifth full, according to the Hellenic Chamber of Hotels, and local cruise operators do not expect bookings before September. – Rappler.com