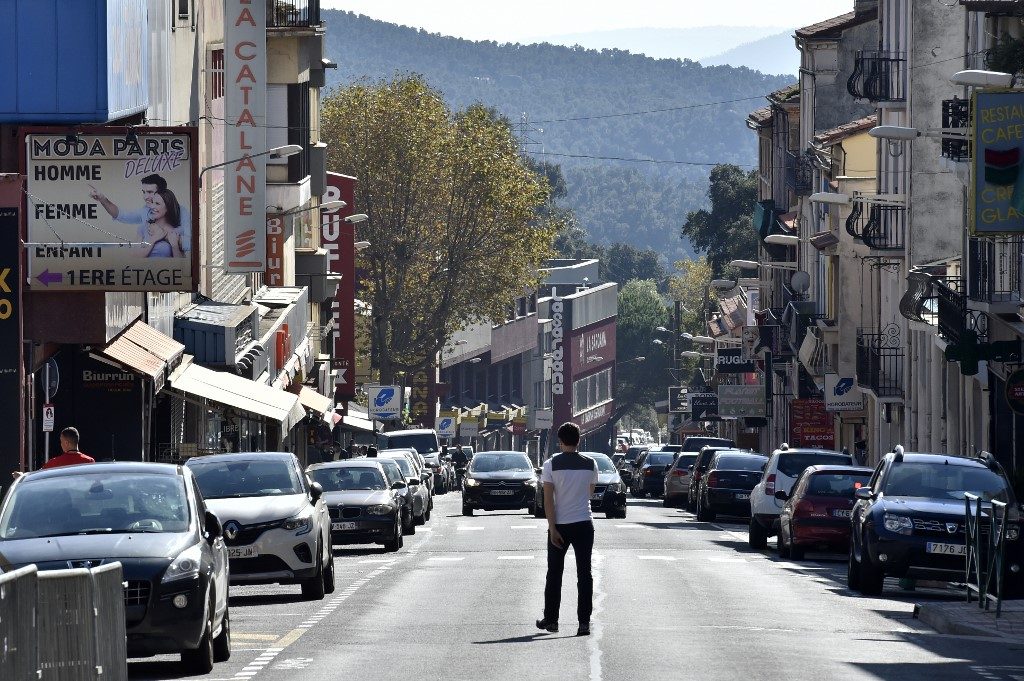 A pedestrian crosses the near-empty main street of Le Perthus, a town in the Eastern Pyrenees with the French-Spanish border running through it, on October 30, 2020, on the first day of a new national lockdown in France aimed at curbing the spread of COVID-19. - On the first day of a new lockdown in France, French shops and restaurants in Le Perthus were all closed. On the other side, some Spanish supermarkets and tobacconists remained open, though clients were scarce, a stark contrast with a rush the day before when thousands of French shoppers took advantage of the last hours prior to lockdown to stock up on cigarettes, alcohol or household products, sold much cheaper in the Pyrenees-Orientales town. (Photo by RAYMOND ROIG / AFP)

Facebook Twitter Copy URL
Copied
Despite the rebound, total gross domestic product in the 19-country eurozone is still 4.3% down compared to the 3rd quarter of 2019

Eurozone output soared by 12.7% in the 3rd quarter, its sharpest recorded increase, as the bloc bounced back from the depths of the coronavirus lockdown, European Union (EU) agency Eurostat said on Friday, October 30.

But, despite the rebound, total gross domestic product (GDP) in the 19-country zone is still 4.3% down on the 3rd quarter of 2019, while unemployment numbers for September and the inflation estimate for October remained flat.

In the EU as a whole, including member states outside the single currency area, GDP increased by 12.1% in the 3rd quarter, but remained 3.9% down on the same period last year.

“These were by far the sharpest increases observed since time series started in 1995,” Eurostat said.

Europe is now in the grip of a second wave of the epidemic, and several countries have begun to reintroduce various forms and levels of lockdown, promising further economic turbulence.

In September, the eurozone’s seasonally adjusted unemployment rate stood at 8.3%, stable over August and up from 7.5% in September 2019 – implying that 15.9 million people are out of work in the EU, 13.6 million of them in the eurozone.

Eurostat’s first estimate for the annual eurozone inflation rate in October is stable at -0.3%, still well below the European Central Bank’s target of a positive rate just below 2%. – Rappler.com