Blowout US GDP report offers boon to Trump amid pandemic 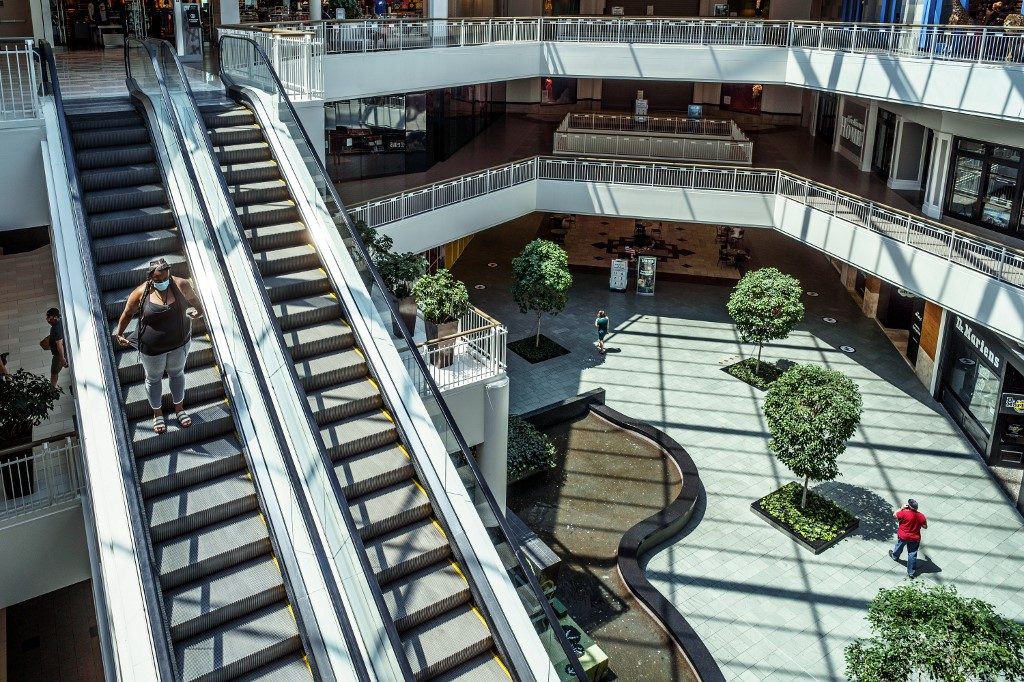 A woman rides the escalator at the Mall of America in Bloomington, Minnesota, on June 16, 2020, after some of the shops at the mall reopened on June 10. - After the worst downturn on record, the US economy posted the strongest recovery on record as it expanded at a 33.1 percent annual rate in the third quarter, the Commerce Department reported on October 29, 2020. (Photo by Kerem Yucel / AFP)

Facebook Twitter Copy URL
Copied
Economists warn that the United States' rebound in July-September 2020 was driven by consumer spending supported by a massive $3 trillion in government aid, much of which has since expired

The United States economy posted a jaw-dropping annual growth rate of 33.1% in the 3rd quarter, a result that had President Donald Trump cheering just days ahead of the election, but economists say the headline number obscures potential signs of trouble.

Facing a tough battle to hold on to the White House in the November 3 election, Trump seized on the data from the Commerce Department as proof the recovery he promised from the COVID-19 pandemic is underway.

“GDP (Gross domestic product) number just announced. Biggest and Best in the History of our Country, and not even close. Next year will be FANTASTIC!!!” Trump tweeted, claiming his rival for  the White House, Joe Biden, would favor policies that “would kill it all.”

“So glad this great GDP number came out before November 3rd.”

But economists warn that the rebound in the July-September period, after the 31.4% drop in the 2nd quarter, was driven by consumer spending supported by a massive $3 trillion in government aid, much of which has since expired.

And even that bounce is not nearly strong enough to repair the damage and get the world’s largest economy back to where it was pre-pandemic, or where it would have been if the expansion had continued at the same pace.

Biden offered a blistering analysis of the data.

“We are in a deep hole and President Trump’s failure to act has meant that Q3 growth wasn’t nearly enough to get us out of; the recovery is slowing if not stalling; and the recovery that is happening is helping those at the top, but leaving tens of millions of working families and small businesses behind,” he said in a statement.

The Commerce Department GDP figures, the first estimate of the results in the latest 3 months, are given at an annual rate – a measure of the full-year result if the gain was translated over 12 months.

If the results are weighed against the preceding 3-month period, as in most other advanced economies, US GDP rose a record 7.4% following the record 9% drop in the previous quarter.

Best is not enough

Despite millions of workers still being jobless and coronavirus cases spiking, raising fears of renewed lockdowns in the United States as there have been in Europe, Washington policymakers have failed to agree on a new rescue package to help households and businesses weather the crisis.

“When your best is simply not enough,” Gregory Daco of Oxford Economics said of the report. “The strong GDP performance gives a false impression of the economy’s true health.”

And the gain in the latest quarter, also helped by a hot housing market amid record low borrowing rates, was offset by a drop in government spending, according to the data.

David Wilcox, former director of the Federal Reserve’s domestic economics division, said it would take a 53% annualized gain just to get GDP back to where it was at the end of 2019.

“The pace of recovery has slowed dramatically in the last few months,” he said, noting “there may have been little or no growth in activity in September.”

Total US job losses in the early weeks of the pandemic hit 20 million, and only about half have returned, while major corporations have announced tens of thousands of layoffs in recent weeks – including another 7,000 from Boeing on Wednesday, October 28.

Meanwhile, the weekly tally of new applications for jobless benefits are only slowly coming down, dropping 40,000 to 751,000 in the week ended October 24, according to Labor Department figures released on Thursday.

But 22.7 million people were receiving some form of unemployment aid, including under special pandemic programs, in the week ended October 10, hardly a sign of a healthy job market.

There have been increasingly urgent calls from the Federal Reserve and others for a new round of federal support aimed at individuals and state and local governments to prevent another wave of job losses and business closures.

But Trump resolutely opposes aid to Democratic-led states, and House Speaker Nancy Pelosi said on Thursday the White House has not responded to her latest list of concerns on the stimulus package.

“As the coronavirus surges and the stock market plummets, we are still awaiting the Trump Administration’s promised responses on multiple items of critical importance,” she said in a letter to Treasury Secretary Steven Mnuchin. – Rappler.com