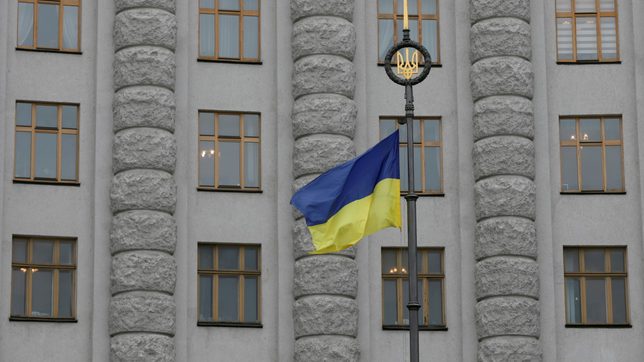 Facebook Twitter Copy URL
Copied
The latest agreement is a boost for the Ukrainian government, which has repeatedly pushed back its estimates of when new IMF loans might become available and faced criticism over perceived backsliding on reforms

The International Monetary Fund (IMF) and Ukraine announced an agreement on Monday, October 18, that could pave the way for Kyiv to receive a $700-million disbursement and secure an extension to its $5-billion loan program through to June.

Ukraine had secured a stand-by loan deal last year as the country, one of Europe’s poorest, tumbled into recession due to the coronavirus pandemic. But loan disbursal stalled over concerns about reforms and the independence of the central bank.

The latest agreement is a boost for President Volodymyr Zelenskiy’s government, which has repeatedly pushed back its estimates of when new IMF loans might become available and faced criticism over perceived backsliding on reforms.

The IMF said the completion of the first review of the $5-billion arrangement, now slated to expire in December, would enable disbursements of about $700 million to the country.

Zelenskiy said he expected the IMF executive board to approve the agreement in November.

“This will allow Ukraine to receive about $700 million and once again confirm our close cooperation,” Zelenskiy wrote on Twitter.

IMF staff had conducted remote discussions with the Ukrainian authorities from September 21 to October 18.

Ivanna Vladkova Hollar, who led the virtual mission, said the two sides reached agreement on an updated set of economic, financial, and structural policies to help address the economic and health crisis caused by COVID-19, while maintaining macroeconomic and financial stability, reducing vulnerabilities, and tackling key obstacles to private investment.

She said the program was focused on returning fiscal policies to settings consistent with medium-term debt sustainability while protecting vulnerable populations, strengthening revenue administration, and reducing risks from “quasi-fiscal operations,” including in the energy sector, while safeguarding central bank independence and reducing inflation.

Ukrainian central bank Governor Kyrylo Shevchenko, in a separate statement, said the central bank had already approved a plan to reduce non-performing loans in state-owned banks, which was a structural benchmark for the first review. – Rappler.com