Is it time for the Philippines’ air traffic control to be privatized? 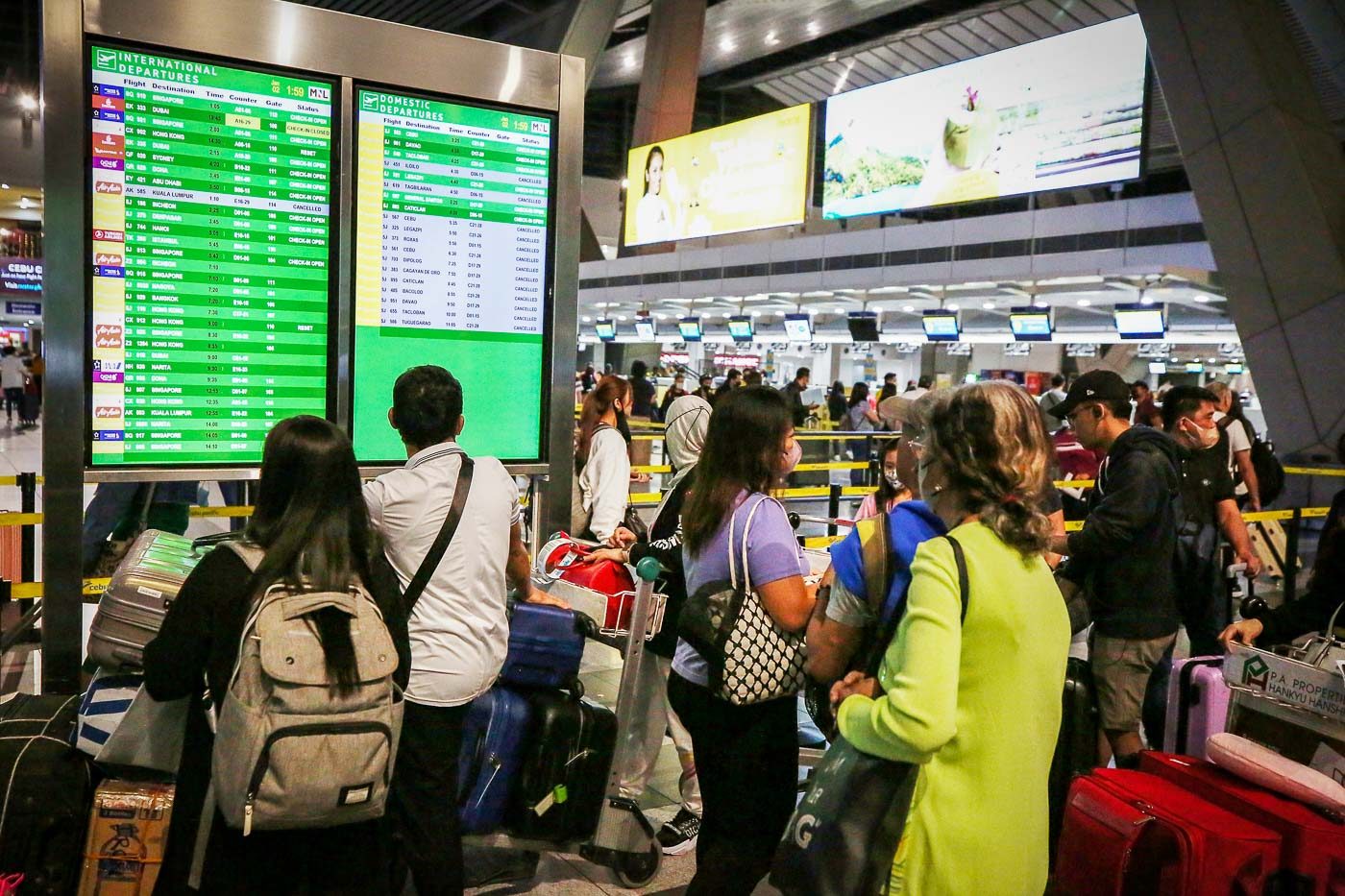 Facebook Twitter Copy URL
Copied
Manila's air traffic fiasco is a national embarrassment and a threat to national security and economic affairs. Can the private sector help save face?

There were already several attempts to put the airport in private hands, with some of the country’s wealthiest tycoons joining forces to make the P102-billion facelift happen. But plans eventually fell through over commercial issues.

In 2023, these talks have been revived once more. Now included in the discussions is the privatization of air traffic control after the power outage shut down air navigation communication, radio, radar, and internet access. It was a perfect storm of an economic mess and national security exposure.

Meanwhile, countries like Australia, Germany, and the United Kingdom have adopted models of government-controlled corporations or forms of private-public partnerships.

Philippine lawmakers are set to probe the outage, and some of the points that may likely arise from these hearings are related to privatization.

It will serve the Philippines well to review what other countries have done, and what proposals they have blocked, to better understand the intricacies of air traffic privatization. Former US president Donald Trump once proposed to shift the responsibility of air traffic from government to a private, non-profit corporation.

In 2017, Trump described US air traffic control as “ancient, broken, antiquated,” and “horrible.” He added that his personal pilot complained about how out-of-date the system was.

The US has the busiest air traffic, having around 45,000 flights and 2.9 million passengers daily across 29 million miles of airspace. This is around 10 million scheduled flights yearly, according to data from the US Federal Aviation Administration (FAA).

Republicans who were in favor of Trump’s move said that privatization would free air traffic control from government budget processes, which limited it from committing to long-term contracts that were needed for capital-intensive infrastructure.

Unlike the government, private companies could also raise funds from capital markets for any major expenses.

Proponents of privatization also argued that it would save the government billions of dollars, as funding traffic control would be sourced through airport fees instead of money from taxpayers, many of which do not fly on a regular basis.

But in a 2017 congressional hearing, US Representative Peter DeFazio pointed out that privatization might mean giving away public assets and taxpayers’ money.

“We are talking about an asset – no one has valued it – worth between $30 billion and $50 billion that will be given to the private corporation free of charge. That is unprecedented. This air traffic control privatization scheme is an extreme and risky venture that will hand over control of our airspace, in effect, to the major airlines,” DeFazio told the US Congress’ transportation committee.

Other lawmakers, and even carriers like Delta Air Lines, also expressed concern about how severing ties between the FAA and air traffic control would impact on national security.

“I believe strongly in the wisdom that can be gained from the private sector. Privatization of the air traffic control, however, would pose a multitude of chain of command issues, differing priorities, and perspectives that could potentially elevate risk and interfere with the end goal of ensuring aviation security,” Sullivan said in The Hill in 2017.

A study by the US Government Accountability Office (GAO) was unable to ascertain if established air defense procedures could be assumed by a non-governmental organization.

“FAA provides and receives critical information and analysis throughout the intelligence, defense,
and law enforcement communities. Such information used to promote safety includes that related to terrorism, counterintelligence, cyber security threats, as well as insider threats to the (National Airspace System). FAA indicated that maintaining such coordination is key to the security of the US air system,” GAO said.

Because of these reasons, Trump’s allies, including House transportation committee chairman Bill Shuster, faced so much opposition from all political spectrums and levels that their proposal did not even reach the floor for further deliberations.

Canada was the first country to privatize its civil air navigation system and remains to be one of the few fully private companies in the world for air traffic control.

The Canada model is one of the few air navigation systems that are purely private, as most are government-owned and operated.

NAV Canada said that the private model is “unique” and keeps their service “oriented and customer focused, and ensures greater independence between the country’s civil aviation operator and regulator.”

But this does not mean that the Canadian government has little influence over it.

Canadian air traffic control was privatized in response to calls to update its infrastructure, which was bogged down by system delays and costs.

NAV Canada’s revenues come from service fees charged to aircraft operators which amount to around CAD$1 billion yearly. It also sells technology and other air navigation services around the world.

No less than Transport Secretary Jaime Bautista admitted that the Philippines was at least a decade behind Singapore’s air traffic systems.

The 10-year lag was attributed to a bureaucratic mess. The upgrades were approved as early as 2010, but were inaugurated only in 2018 and became operational just in 2019. Ashley Acedillio, president of the Philippine Institute of Cybersecurity Professionals, said that the New Year blackout was never supposed to happen to “mission critical systems” or those that involved the essential survival of a business or industry. Redundancies were supposed to be in place. Systems were also supposed to be able to absorb power fluctuations.

“A power surge is never supposed to happen in mission critical systems like air traffic control to avoid turning the Philippine airspace into a black hole,” said Acedillo in an interview with TV5.

The power outage incident is currently being investigated by the Aerodome and Air Navigation Safety Oversight Office, an office under the Civil Aviation Authority of the Philippines. It is composed of CAAP technical personnel, aerodrome and electrical engineers, air traffic controllers, and a lawyer.

“So they will investigate themselves? That’s not really an oversight, that’s so weird,” a reporter commented in the transportation department’s Viber chat group. The comment was met with various laughing emojis from other beat reporters. Transport officials did not respond to the comment.

State planners and economists have flagged this organizational flaw as early as 2011.

Under the National Economic and Development Authority’s Philippine Development Plan – 2011 to 2016, it was found that CAAP was both the chief regulator, as well as operator of several airports and air traffic control.

Countries like Singapore have divided the regulatory and operational functions to avoid conflict of interest. In Thailand, three agencies serve as regulator, operator, and air navigation.

“In countries like Singapore, they operate at 99.9% uptime. This means that, in a year, systems are only down a maximum of five hours. They use it for maintenance works,” said Acedillo, who formerly was a representative of the Magdalo Partylist.

When Acedillo was a lawmaker, he pushed for creating a transport safety board to oversee and probe accidents in maritime, rail, and air transport.

“We don’t leave it to the regulator to investigate, but we leave it to an independent body,” he said.

When asked about privatizing air traffic control, Acedillo said that there’s no one-size-fits-all solution. “It may or may not work,” he said.

Some senators like Nancy Binay have outright rejected calls for it.

“Let’s make it clear, there is a difference between airport management and operations from air traffic operations. We cannot privatize components of national aviation system,” Binay said in a statement.

“I don’t think we should allow private entities to handle critical government facilities that carry national security concerns. That’s non-negotiable, otherwise, that means reducing the government’s involvement and control of our airspace.” – Rappler.com