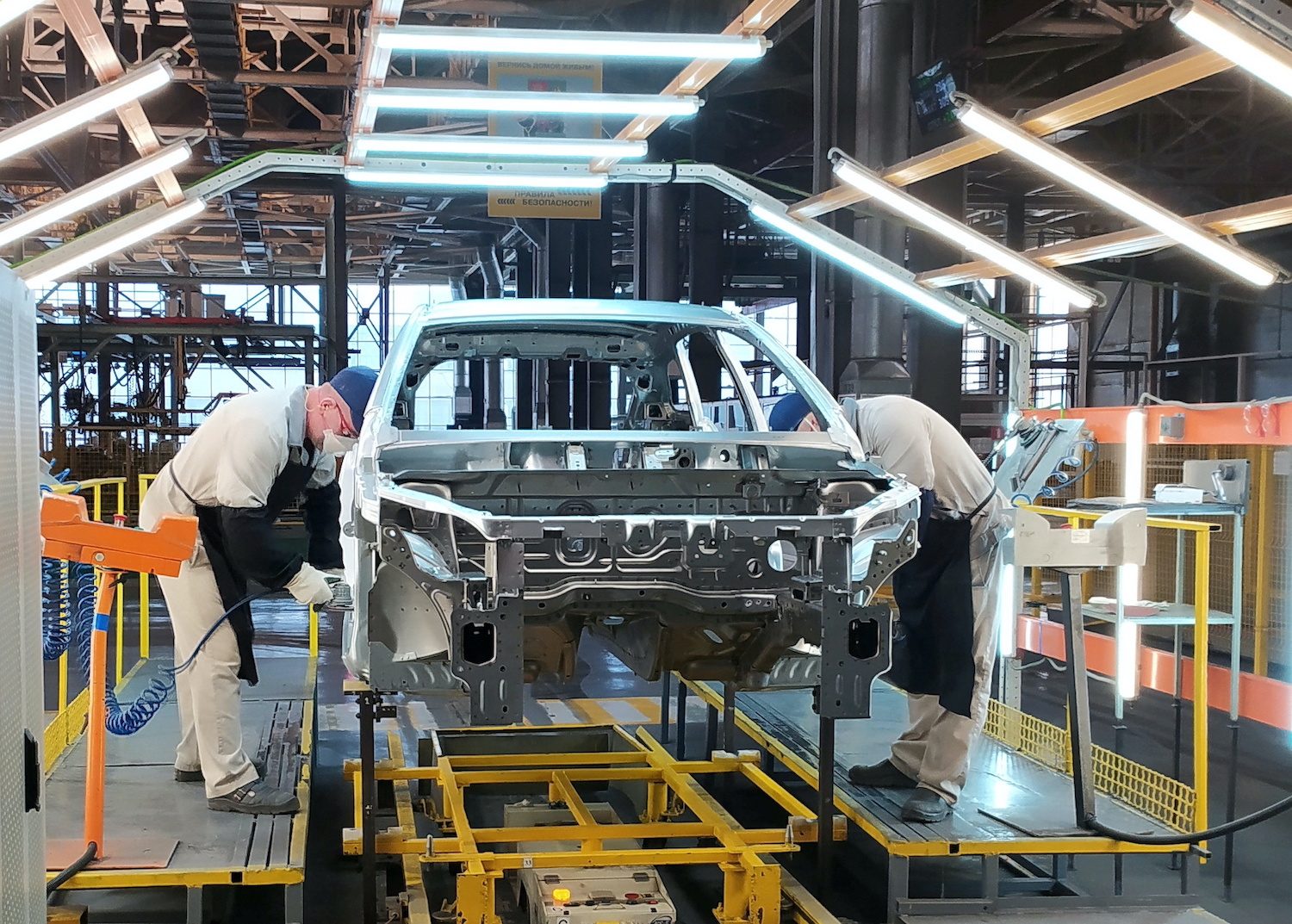 AVTOVAZ. Employees work at the assembly line of the Lada Izhevsk automobile plant, part of the Avtovaz Group, in Izhevsk, Russia, February 22, 2022.

Renault will transfer its 68% stake in Russia’s biggest carmaker Avtovaz to an auto research institute for one symbolic rouble, Russia said on Wednesday, April 27, the latest example of local institutions snapping up bargains as Western firms flee.

The trade ministry also said Renault’s factory in Moscow, which produces cars under the Renault and Nissan brands, would be passed to the city’s government, in another sign of what Russian authorities plan to do with Western assets.

The French carmaker and the French government, which owns a 15% stake in Renault, both declined to comment on the deal, which was first reported by Russian news agencies citing Trade Minister Denis Manturov.

The trade ministry said Renault would have the right to buy back its Avtovaz stake within five to six years from NAMI, an institute founded over a century ago behind the design and building of Russia’s cars and trucks – including the limousines used by President Vladimir Putin.

The moves are likely to underscore concerns that Russian firms and institutions are snapping up the country’s most prized assets for a bargain as Western companies scramble to comply with sanctions over the Ukraine conflict, as well as threats from the Kremlin that foreign-owned assets may be seized.

The Russian government is drawing up legislation that could see control of foreign companies handed over to external local management and make it a criminal offense for foreign executives and companies to implement sanctions.

Renault, the Western carmaker most exposed to Russia, said last month it would suspend operations at its Moscow plant and was considering a 2.2-billion-euro ($2.3-billion) non-cash write-down to reflect the potential costs of the suspension.

Shares in Renault fell in early trading but later reversed those losses to trade up 1.1% at 0954 GMT, outperforming France’s blue-chip index.

Renault decided to transfer its stake in Avtovaz, which owns the famed Lada brand, to NAMI because it lacked the ability to keep its Russian operations going, the trade ministry said.

The deal would be worth a single rouble and gives Renault the option to buy the stake back, it said.

“But if during this period we make investments, then that will be taken into account when it comes to the cost. There won’t be any presents here,” Interfax quoted Manturov as saying.

Moscow’s invasion of Ukraine on February 24 has prompted a mass corporate exodus from Russia. More than 750 companies have announced they are curtailing operations there to some degree, according to the Yale School of Management.

French electrical equipment maker Schneider Electric said on Wednesday it would sell its operations in Russia and Belarus to local management and had signed a letter of intent with the designated buyers.

There are only a few examples of interest from foreign companies in taking over Russian businesses.

Anheuser-Busch InBev is in talks to sell its stake in its Russian and Ukrainian venture to its Turkish partner, in a deal that could result in a $1.1-billion charge for the world’s largest brewer.

British energy company Shell was reported to be in talks with some Chinese firms to sell its stake in a major Russian gas project. Shell declined to comment on the report.

Russia calls its actions in Ukraine a “special operation” to disarm Ukraine and protect it from fascists. Ukraine and the West say the fascist allegation is baseless and that the war is an unprovoked act of aggression. – Rappler.com