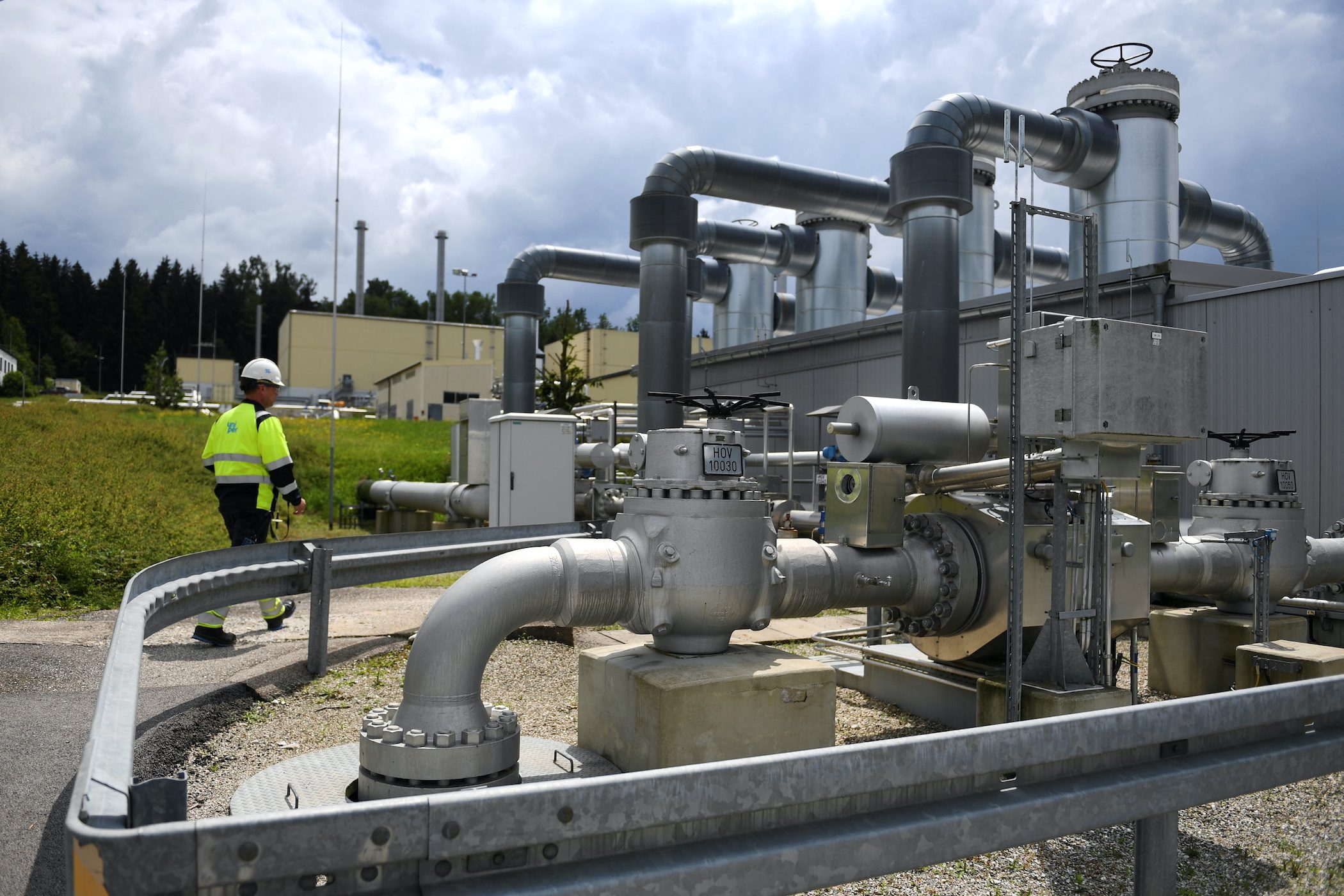 UNIPER. A worker checks a unit at Uniper's Bierwang gas storage facility near the Bavarian town of Kraiburg am Inn, Germany, June 10, 2022.

LONDON, United Kingdom – Russian gas supply to Europe via the Nord Stream 1 pipeline fell further on Thursday, June 16, and Moscow said more delays in repairs could lead to suspending all flows, putting a brake on Europe’s race to refill its gas inventories.

The faltering flows came as the leaders of Germany, Italy, and France visited Ukraine, which is pressing for swifter weapons deliveries to battle invading Russian forces and wants support for Kyiv’s bid to join the European Union.

Russia’s state-controlled Gazprom said it was reducing gas supply for a second time in as many days via Nord Stream 1, which runs under the Baltic to Germany. The latest move cuts supply to just 40% of the pipeline’s capacity.

Kremlin spokesperson Dmitry Peskov said reductions in supply were not premeditated and related to maintenance issues, a reference to earlier comments saying Russia was unable to secure the return of equipment sent to Canada for repairs.

Germany said Russia’s excuse was technically “unfounded” and was instead aimed at driving up gas prices. Italy said Moscow might be using the issue to exert political pressure.

Russia’s ambassador to the European Union told state news agency RIA Novosti flows via the pipeline could be completely suspended because of problems in repairing turbines in Canada.

Alexey Miller, the chief executive of Gazprom, the state-controlled company with a monopoly on Russian gas exports by pipeline, said Western sanctions made it impossible to secure the return of equipment from Canada for the pipeline’s Portovaya compressor station.

Nord Stream 1 has capacity to pump about 55 billion cubic meters a year to the European Union, which last year imported about 140 bcm of gas from Russia via pipelines.

Germany, like other European countries, is racing to refill its gas storage facilities so they are 80% full by October and 90% by November before winter arrives. Stores are 52% full now.

Cutting flows through Nord Stream 1 would make that job harder, the head of the Germany energy regulator said.

“We could perhaps get through the summer as the heating season is over. But it is imperative that we fill the storage facilities to get through the winter,” Klaus Mueller told Thursday’s edition of Rheinische Post daily.

Uniper, Germany’s biggest importer of Russian gas, said supplies were down a quarter on agreed volumes but it could fill missing volumes from other sources. Power producer RWE said it had seen restrictions in the past two days.

Slovakia’s state-owned gas importer SPP said it expected Thursday’s Russian gas deliveries to be reduced by about 30%, while Czech power utility CEZ said it had seen a similar fall but was filling the gap from other sources.

The European Union aims to ensure gas storage facilities across the 27-nation bloc are 80% full by November.

The latest reduction in supply could mean northwest European storage only 88% full by the end of October – 1 bcm less than planned – instead of 90%, analysts at Goldman Sachs said.

Germany is not alone in facing falling supplies.

Austria’s OMV said Gazprom informed it of reduced deliveries, France’s Engie said flows had gone down but clients were not affected, while Italy’s Eni said it would receive 65% of the volumes it had requested from Gazprom.

The Italian government said all possible measures were in place to deal with the situation if gas supply cuts from Russia continued in coming days. Other European countries have also drawn up contingency plans.

Adding to the challenge, Nord Stream 1 will shut completely during the pipeline’s annual maintenance on July 11 to 21.

Norway, Europe’s second biggest exporter behind Russia, has been pushing up production to help the European Union towards its target of ending reliance on Russian fossil fuels by 2027.

Britain’s Centrica signed a deal with Norway’s Equinor for extra gas supplies to the United Kingdom for the next three winters. Britain does not rely on Russian gas and can also export to Europe via pipelines.

A fire last week at a US LNG export plant in Texas, operated by Freeport LNG, means the plant will be offline until September and will operate only partially from then until the end of 2022.

The facility, which accounts for about 20% of US LNG exports, has been a major supplier to European buyers.

“There is risk of further delay, in our view,” analysts at investment bank Jefferies said, adding that regulators need to approve the restart while two investigations were ongoing into the cause of the LNG leak at the plant. – Rappler.com