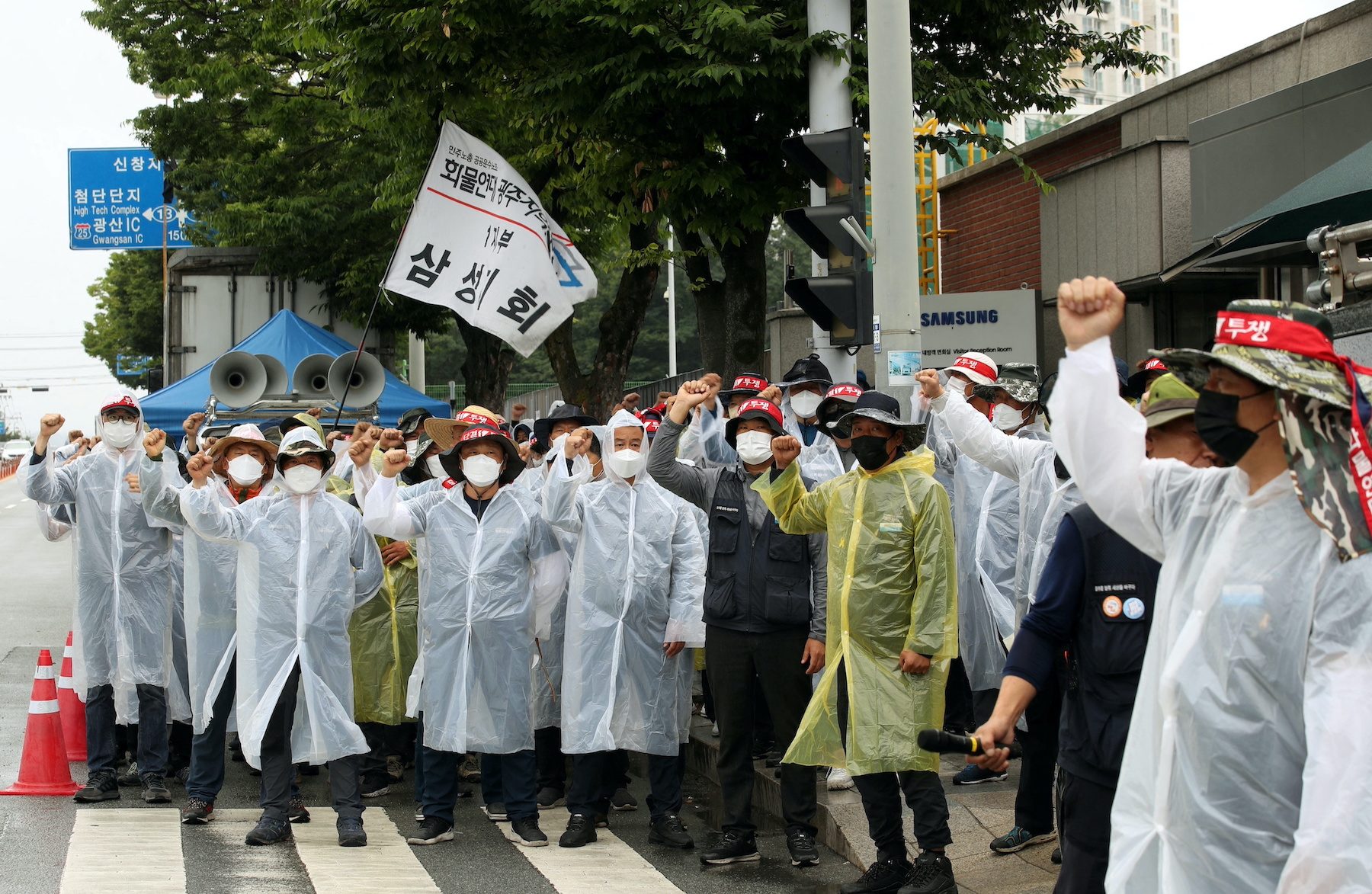 PROTEST. Members of the Cargo Truckers Solidarity union take part in a protest in front of a Samsung Electronics factory in Gwangju, South Korea, June 14, 2022.

The eight-day strike has delayed cargo shipments for industries from autos to petrochemicals and spirits in the export-heavy nation, and cost South Korea’s industry more than $1.2 billion in lost output and unfilled deliveries, according to the industry ministry.

The latest round of talks were held at a major industrial transport hub near the capital, where Transport Minister Won Hee-ryong earlier warned the government may step in and force truckers to return to work or face jail.

“The Cargo Truckers Solidarity Union will immediately return to work, and the Ministry of Land, Infrastructure, and Transport will make utmost efforts so that truckers can return to work…” the union said in a statement.

In a separate statement, the transport ministry said it will work with parliament on extending minimum pay guarantee and review expanding fuel subsidies and support “in order to ease truckers’ difficulties from recent rise in oil prices.”

The trucker strike had cost the South Korean auto industry about 5,400 vehicles in lost production, worth about 257 billion won as of Sunday, June 12, according to the industry ministry.

Average daily shipments of about 74,000 metric tons of petrochemical products have been slashed by 90% due to the strike, the Korea Petrochemical Industry Association had said.

Small business owners had voiced concern about the havoc a lengthy strike could have on the recovery from the COVID-19 pandemic, as the truckers launched their action less than two months after social distancing norms were lifted.

“Small business owners are waiting helplessly,” a dozen lobby groups representing such businesses said in a joint statement, adding that shipments of liquor, food, farm, and fisheries products had been blocked.

An official from HiteJinro Company Ltd, the biggest brewer of soju, the South Korean liquor, said its shipments were cut by about 40% by the strike.

“It was the breaking point, but it turned out well,” said trucker Kang Myung-gil, a 50-year-old father of three who had joined the strike despite not being part of the union to protect his family’s livelihood.

“It’s going to be a sweet sleep.” – Rappler.com