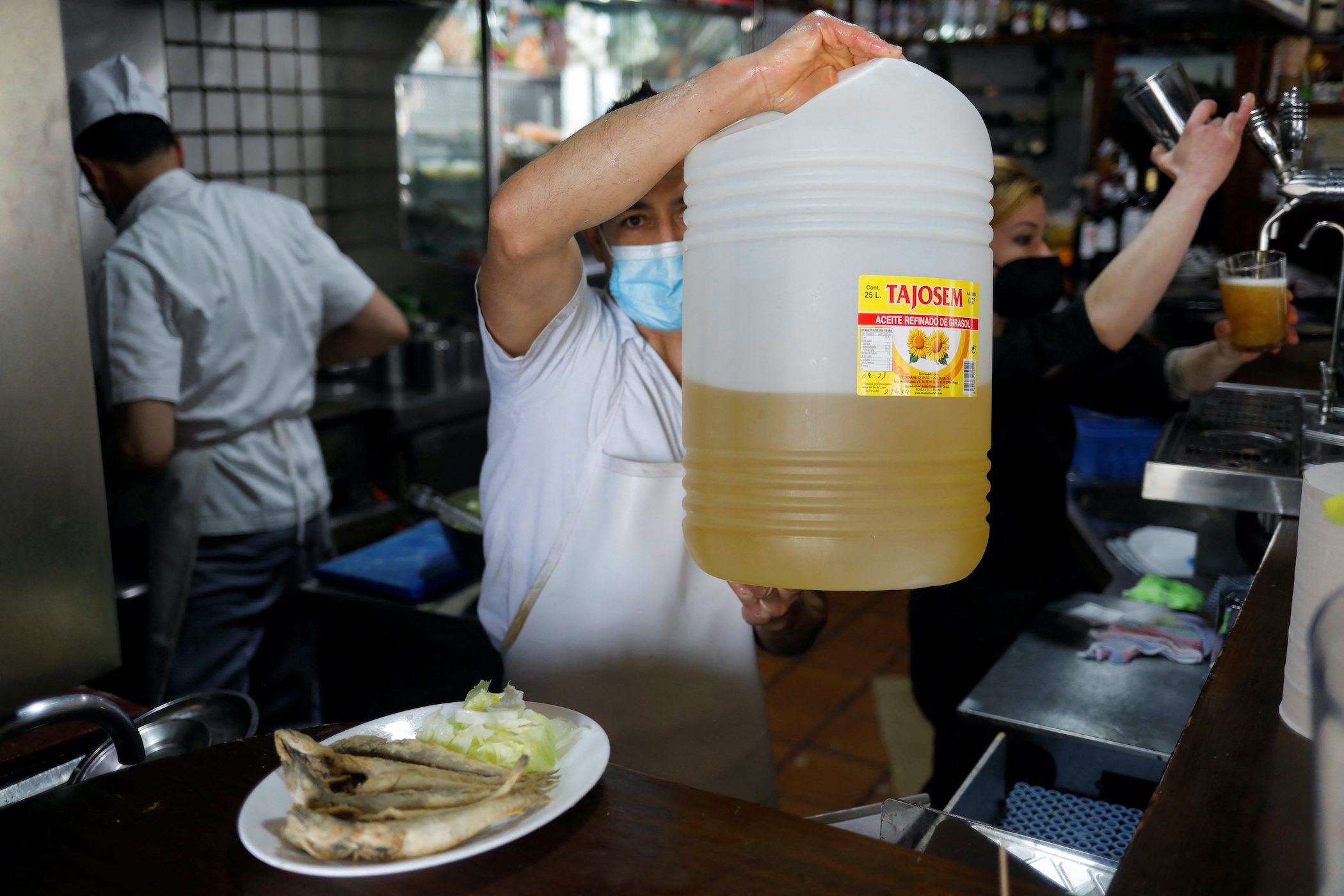 MADRID, Spain – A surge in sunflower oil prices after Russia’s invasion of Ukraine cut supply has proved an opportunity for producers of one of Spain’s best-known products: olive oil.

Even after Spanish supermarkets limited the purchase of sunflower oil to a few bottles per person, shelves ran dry, prompting retailers to fill their shelves with the homegrown alternative.

“I like to say we have an ace up our sleeve,” said Primitivo Fernandez, president of the national association of edible oil bottlers. “In Spain, bottled oil consumption is guaranteed because we have enough olive oil.”

Sunflower oil from Ukraine represents around 40% – or 400,000 tons – of the total Spain imports to supplement the 300,000 tons it produces in the country.

The price of sunflower oil has risen by 64% in the last week, the latest official data shows.

As customers stocked up, sales of all edibile oils soared by 289% compared to the same week in 2021, according to market researcher NielsenIQ quoted by Spanish state TV.

Retailers have called on people to refrain from the kind of panic buying previously seen during the early period of the COVID-19 pandemic.

“It happened with toilet paper in 2020, now it is happening with sunflower oil or flour. It’s hoarding, nothing more,” Juan Roig, owner of Spain’s largest supermarket chain Mercadona, told an annual earnings event.

Spain produces more olive oil than it consumes and exports a third of its production of virgin and refined oils.

The industry estimates it will have 1.5 million tons of olive oil and another 250,000 tons of olive pomace oil (a more refined by-product) to cover the shortfall of Ukrainian imports, while it looks for replacement markets.

Spain also hopes to sell more olive oil to neighbors France and Germany. “We are confident this is an opportunity,” Fernandez said. “We will probably be able to reach new consumers.”

A matter of taste

The Spanish government has joined those talking up olive oil as a solution to shortages, with Agriculture Minister Luis Planas telling local television on March 14 it could be easily exchanged for sunflower oil.

“I have personally verified in the supermarket that some olive oils are labeled as oil for frying – a practical demonstration that it can and should be used for such,” he said.

But some restaurateurs, and manufacturers of processed foods, fish canneries, and bakeries, disagree that the two oils are interchangeable.

At the Mallorca patisserie factory in southern Madrid, the team work at full pelt frying torrijas, a sweet bread, milk, and sugar confection cooked in huge cauldrons of sunflower oil.

Jacobo Moreno, one of the owners of the chain established in Madrid 90 years ago, said he had to swallow the cost of sunflower oil rising from 1.2 euros to 2.60 euros per liter over four days to ensure the quality of output for the special Easter season.

It is still cheaper than olive oil, which costs around 4 euros per liter.

“It is true that in Spain what we have most and are most famous for is olive oil, but the reality is that it’s not suitable for baking because of its aggressive flavor,” he said.

Biscuits, chocolate creams for filling pastries, and packaged breads must also be made with sunflower oil, said Ruben Moreno Pardo, secretary general of the Spanish Confectionery Association. “We are two, maximum three weeks away from running out of sunflower oil stock,” he said.

His industry is investigating vegetable oils such as corn or coconut, but Spain does not yet have a stable supply.

Canned fish manufacturers pack at least half of their production in sunflower oil. Although they also use olive oil, they worry the stronger flavor and higher cost might put customers off, said national canning association secretary general Juan Vieites.

Meanwhile chef Alejandro Aguilar plans reluctantly to switch to olive oil when his stock of sunflower oil runs out to fry fish in his restaurant in the southern city of Ronda.

“The plan is to fry with olive [oil], there’s no other option. I don’t like any other oils,” he said. – Rappler.com