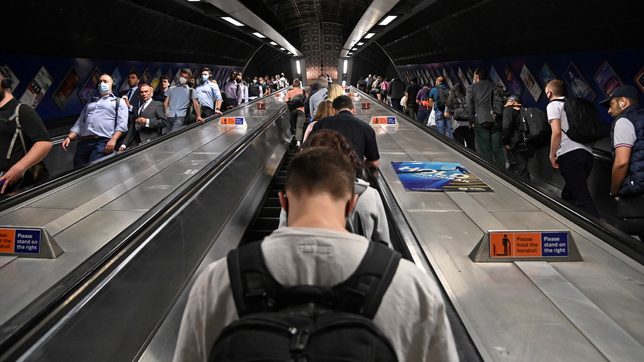 Facebook Twitter Copy URL
Copied
Britain's unemployment rate falls by more than expected to 4.3% in the third quarter of 2021

Britain‘s job market withstood the end of the government’s furlough scheme last month, according to data which could ease lingering concerns at the Bank of England (BoE) about the risks of raising interest rates from their pandemic low.

Sterling strengthened as the number of staff on businesses’ payrolls in October rose to 0.8% above levels in February 2020, before the coronavirus pandemic hit, and increased by 160,000 on the month.

The BoE has been watching closely in case unemployment rose after the job-protecting furlough scheme expired at the end of September.

“Now that today’s labor market data shows that hurdle has been cleared, we think the Bank of England has the green light for interest rate liftoff at their December meeting,” Ambrose Crofton, a global market strategist at JP Morgan Asset Management, said.

The BoE’s next monetary policy announcement is scheduled for December 16.

But Andrew Goodwin at Oxford Economics, a consultancy, said the BoE might need more time to assess the strains facing many consumers from inflation set to hit almost 5% in April, when workers will also have to pay more tax.

“Given the cost of living challenges facing households and a full assessment of furlough’s end arguably needing several months’ worth of data, we narrowly think the MPC (Monetary Policy Committee) will delay rate liftoff until February,” Goodwin said.

The Office for National Statistics (ONS) said it was possible that people made redundant at the end of the furlough scheme would continue to appear as in work in the data for a few further months, while they worked out their notice period.

“However, responses to our business survey suggest that the numbers made redundant were likely to be a small share of those still on furlough at the end of September 2021,” the ONS said.

The ONS said average weekly earnings in the July-September period were 5.8% higher than in the same three months of 2020, the smallest annual increase since April.

Excluding bonuses, earnings were 4.9% higher than a year earlier, the smallest rise since the three months to March.

The ONS estimated the underlying pace of growth in wages – taking into account workers going back on full pay after furlough and how job losses during the coronavirus lockdowns fell most heavily on lower-paid workers – stood between 3.4% and 4.9% for pay excluding bonuses.

BoE Governor Andrew Bailey has said Tuesday’s jobs data and another release due in four weeks’ time will be critical for the central bank’s thinking about whether to raise the Bank Rate for the first time since the pandemic struck.

“The anecdotes suggest the transition out of the furlough scheme has not raised unemployment but we don’t really know the full story,” Bailey told lawmakers on Monday, November 15. But he added that he thought the labor market was “considerably tighter.”

Tuesday’s data showed job vacancies hit an all-time high of 1.172 million in the three months to October, almost 400,000 more than before the pandemic, although the pace of growth slowed again.

The Resolution Foundation, a think tank, said it was taking only one and a half months on average for an employer to fill a vacancy, matching a record-quick time seen before the pandemic.

“This shows that record vacancies are being driven by the economy reopening, rather than it being impossible to hire staff as some have suggested,” it said.

Employers in some sectors such as food processing and road haulage say post-Brexit restrictions on workers from the European Union are making it harder for them to fill positions. – Rappler.com