Oil producers as ‘superheroes’ is not how it works, UAE minister says 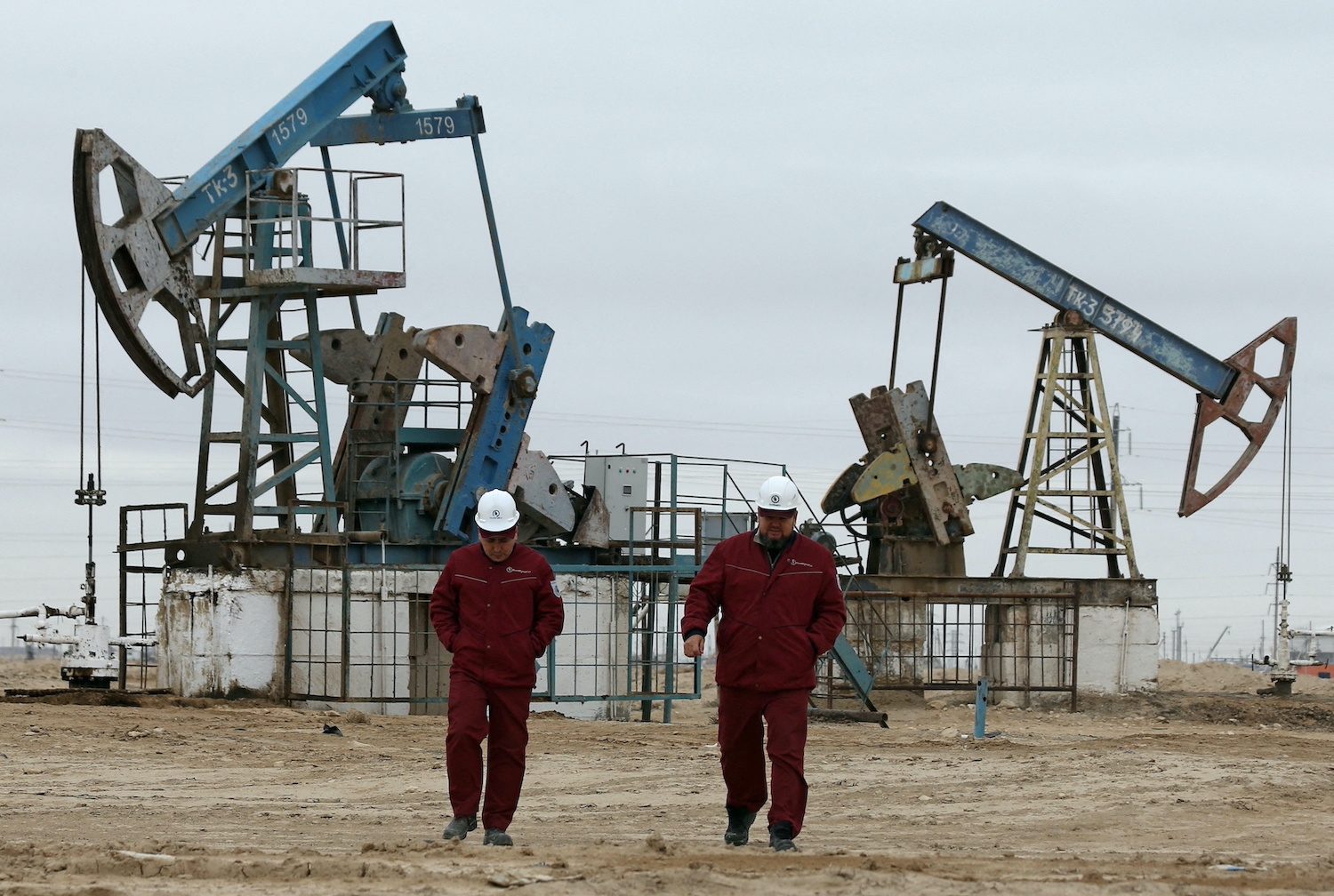 OIL. Workers walk as oil pumps are seen in the background in the Uzen oil and gas field in the Mangistau region of Kazakhstan, November 13, 2021.

DUBAI, United Arab Emirates – Oil producers who felt like outcasts at the COP 26 climate conference last year are now being treated like superheroes because their supplies are in strong demand, United Arab Emirates Energy Minister Suhail al-Mazrouei said on Monday, March 28, at an industry event.

Mazrouei suggested it was not possible to underinvest and preach renewables and then ask for output boosts during a crunch – long-term planning is needed.

“I think in COP 26 all the producers felt they were uninvited and unwanted but now we are again superheroes, it’s not going to work like that,” he said.

Resource-rich developing nations have often pushed back against calls for a rapid move away from fossil fuels, arguing for a more orderly transition.

Mazrouei stressed the need for investment in oil and gas alongside renewables even though the energy transition is taking place, saying OPEC+ needs to replace at least 5 million to 8 million barrels lost every year to keep production where it is.

The United Arab Emirates will work with OPEC+ to make sure the energy market is stable, he said.

You still need us, UAE tells US as it flexes Gulf oil muscles The UAE is doing its best to raise capacity to 5 million barrels per day (bpd) but that does not mean it wants to act on its own or leave OPEC+, a group that includes the Organization of the Petroleum Exporting Countries, Russia, and others, Mazrouei said.

“We as a country are trying to do our best. We are investing and raising our capacity to 5 million barrels,” he said.

“But that does not mean that we will leave OPEC+ or do something unilateral. We will work with this group to ensure that the market is stable.”

The UAE sent confusing messages earlier this month on whether it supported higher output or not when its ambassador to Washington said his country would encourage OPEC to consider higher output. The energy ministry has since repeatedly said it endorsed OPEC+ decisions and only acts within it.

OPEC+ is scheduled to meet next on Thursday, March 31.

The group has been raising its output target by 400,000 barrels a day since August to ramp up production after historic cuts prompted as the pandemic slashed demand.

It has in fact struggled to achieve those increases, while the United States and other consuming nations have asked for even faster output increases.

Senior US official Amos Hochstein told the event by teleconference he had no message for OPEC+ before it meets and said the oil-producing group would do what it saw as right.

Hochstein, US presidential coordinator for energy security and build back better world, said the US commitment to the Gulf region was “rock solid” and condemned recent attacks by Yemen’s Iran-backed Houthi movement on Gulf states.

The Houthis have escalated missile and drone attacks on the kingdom’s oil facilities in recent weeks.

Saudi Arabia said one week ago that it would not bear responsibility for any global oil supply shortages after attacks on its oil facilities by the Houthis.

“There are a lot of stories about our commitment. Our commitment to the region is rock solid. It has always been. In no attack will we ever say ‘it’s your problem not ours,'” said Hochstein.

The oil market has been volatile, buffeted by Russia’s invasion of Ukraine and the expansion of COVID-19-related lockdowns in China, the world’s largest crude importer.

Mazrouei said OPEC+ needs to stay out of politics.

“I think the organization will stay, Russia is an important member,” he said.

Benchmark Brent crude surged 11.5% last week on concerns that sanctions on Russia over the Ukraine crisis would start to bite into its production and exports. It was down more than 3% on Monday.

He said volatility in prices was the result of an underlying structural issue and demand was expected to reach pre-pandemic levels by the fourth quarter of this year. – Rappler.com