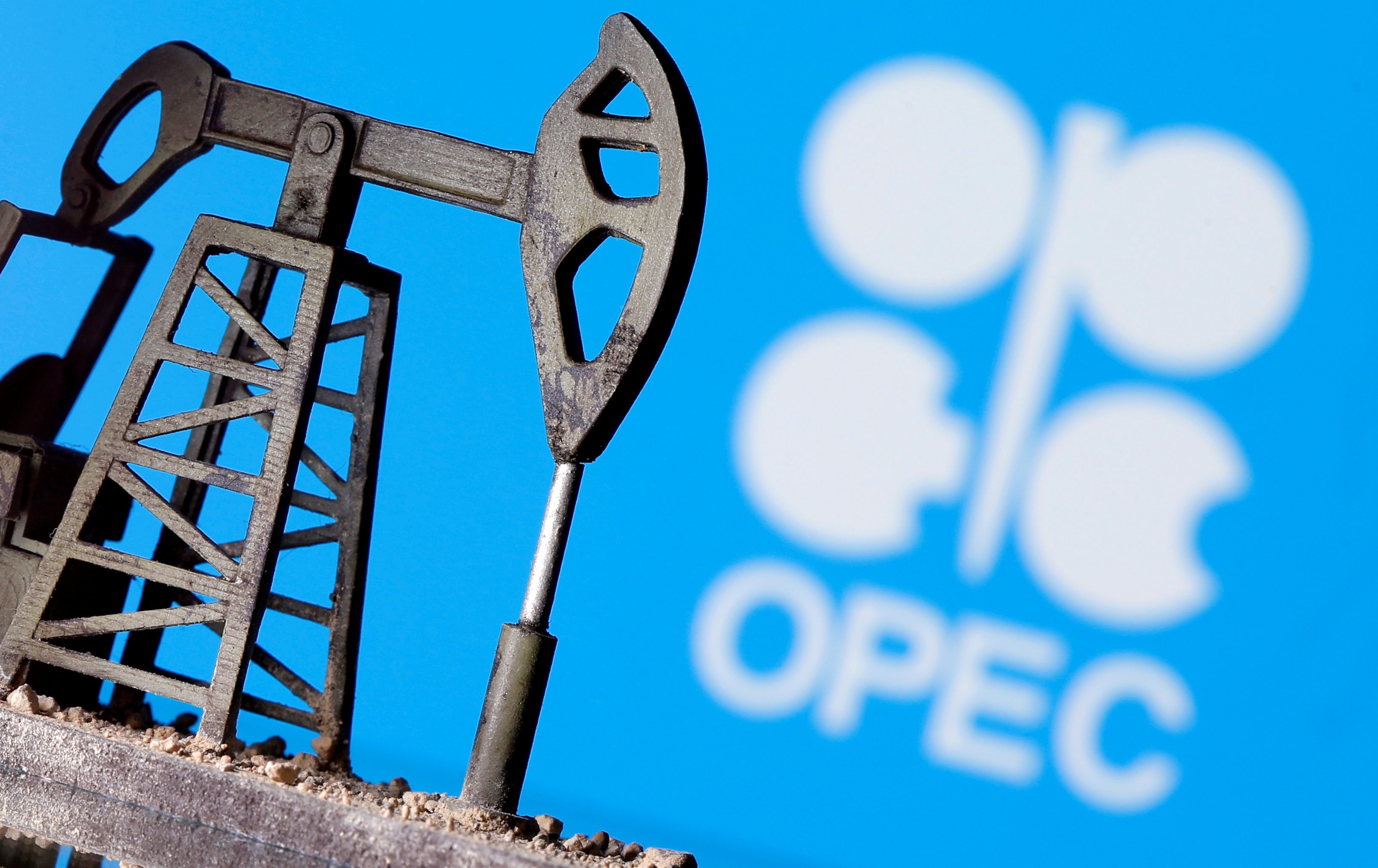 OPEC. A 3D-printed oil pump jack is seen in front of a displayed OPEC logo in this illustration picture, April 14, 2020.

Facebook Twitter Copy URL
Copied
In a statement after its meeting, OPEC+ makes no mention of the Ukraine crisis, simply referring to 'geopolitical developments' that are unsettling the market

OPEC+ oil producers agreed on Wednesday, March 2, to stick to their plans for a modest output rise in April, ignoring the Ukraine crisis during their talks and snubbing calls from consumers for more crude even as crude prices rocketed higher.

Oil prices shot above $110 a barrel this week, hitting peaks not seen since 2014, as Western sanctions tightened on Moscow over its invasion of Ukraine and disrupted oil sales from Russia, the world’s second largest oil exporter.

The Western measures have deterred many buyers of Russian crude and even caused problems for exports from Russia’s neighbor, Kazakhstan, another member of OPEC+.

The group comprising the Organization of the Petroleum Exporting Countries, Russia, and allied producers has been hiking output by 400,000 barrels per day (bpd) each month since August as OPEC+ unwinds cuts made when the pandemic slashed demand.

The group has resisted repeated calls from the United States and other major consumers for more supplies.

In a statement after Wednesday’s meeting that announced the decision to roll over existing plans, the group made no mention of the Ukraine crisis, simply referring to “geopolitical developments” that were unsettling the market.

After Wednesday’s talks, which lasted less than a quarter of an hour and the shortest meeting on record, one source said, “There was not even a word pronounced on the Ukraine issue.”

Other sources confirmed that the group, which includes Saudi Arabia, a US ally and the world’s biggest oil exporter, had not touched on the Ukraine crisis.

Alexander Novak, the Russian deputy prime minister who represented Russia at the OPEC+ talks, said he hoped oil market volatility would ease and said Russian output was expected to reach pre-pandemic levels in May.

Russia, under increasing pressure from Western sanctions which have hammered its rouble currency and forced it to jack up interest rates, describes its action in Ukraine as a “special operation” and says it has no plans to occupy the country.

The United States, which said on Wednesday it was still open to imposing sanctions directly on Russia’s energy industry, has repeatedly called for more oil from OPEC+, but only a few countries have spare capacity, including OPEC’s de facto leader Saudi Arabia and its Gulf neighbor the United Arab Emirates.

OPEC+ still has 2.6 million bpd of cuts it expects to unwind by the end of September, while demand for oil rebounded sharply as the pandemic has waned, sending oil prices sharply higher.

The UAE, a close US ally in the Middle East, abstained in a vote on Friday, February 25, on a United Nations Security Council resolution condemning Moscow’s actions in Ukraine.

The next OPEC+ meeting is scheduled for March 31. – Rappler.com