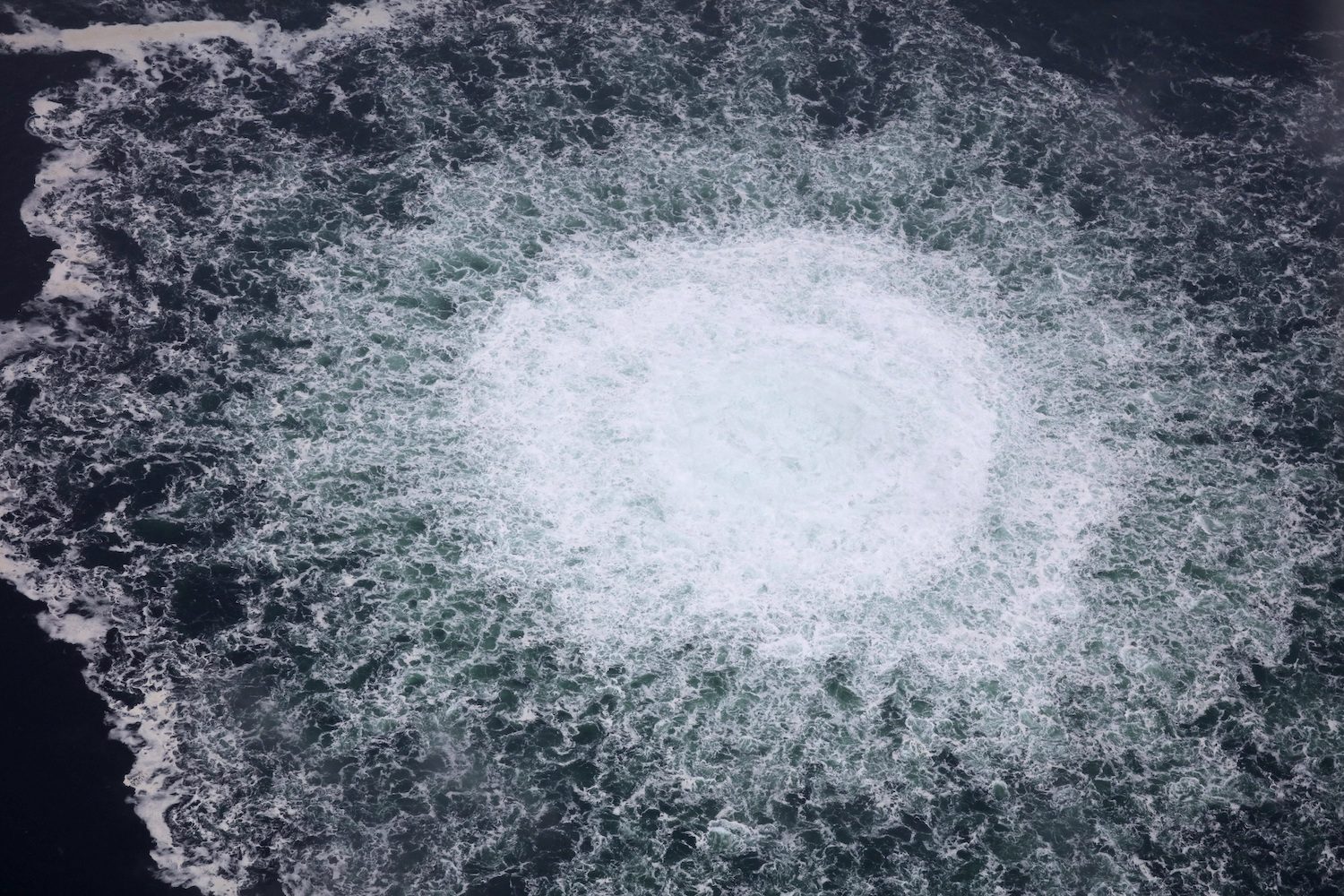 GAS LEAK. A gas leak from Nord Stream 1 is seen in the Swedish economic zone in the Baltic Sea, September 28, 2022.

Facebook Twitter Copy URL
Copied
Researchers estimate the leak rate from one of four rupture points is 22,920 kilograms per hour. That is equivalent to burning about 630,000 pounds of coal every hour, GHGSat says.

The ruptures on the Nord Stream natural gas pipeline system under the Baltic Sea have led to what is likely the biggest single release of climate-damaging methane ever recorded, the United Nations Environment Programme (UNEP) said on Friday, September 30.

A huge plume of highly concentrated methane, a greenhouse gas far more potent but shorter-lived than carbon dioxide, was detected in an analysis this week of satellite imagery by researchers associated with UNEP’s International Methane Emissions Observatory (IMEO), the organization said.

“This is really bad, most likely the largest emission event ever detected,” Manfredi Caltagirone, head of the IMEO for UNEP, told Reuters. “This is not helpful in a moment when we absolutely need to reduce emissions.”

Researchers at GHGSat, which uses satellites to monitor methane emissions, estimated the leak rate from one of four rupture points was 22,920 kilograms per hour. That is equivalent to burning about 630,000 pounds of coal every hour, GHGSat said in a statement.

The total amount of methane leaking from the Gazprom-led pipeline system may be higher than from a major leak that occurred in December from offshore oil and gas fields in Mexican waters of the Gulf of Mexico, which spilled around 100 metric tons of methane per hour, Caltagirone said.

The Gulf of Mexico leak, also viewable from space, ultimately released around 40,000 metric tons of methane over 17 days, according to a study conducted by the Polytechnic University of Valencia and published in the journal Environmental Science & Technology Letters.

That is the equivalent of burning 1.1 billion pounds of coal, according to the US Environmental Protection Agency’s Greenhouse Gas Equivalencies Calculator.

Improved satellite technology has rapidly enhanced the ability of scientists to find and analyze greenhouse gas emissions in recent years, something some governments hope will help companies detect and prevent methane emissions.

The major leaks that suddenly erupted in the Nord Stream gas pipelines that run from Russia to Europe have generated but few clear answers about who or what caused the damage. Both Russia and the European Union have suggested the ruptures were caused by saboteurs.

Europe and the United States have heaped sanctions on Moscow in retaliation for its invasion of Ukraine, raising worries the Kremlin will seek to deprive Europe of crucial energy supplies leading into the winter.

Caltagirone said, whatever the cause, the damage to the pipeline posed a problem beyond energy security. “This is the most wasteful way to generate emissions,” he said. – Rappler.com