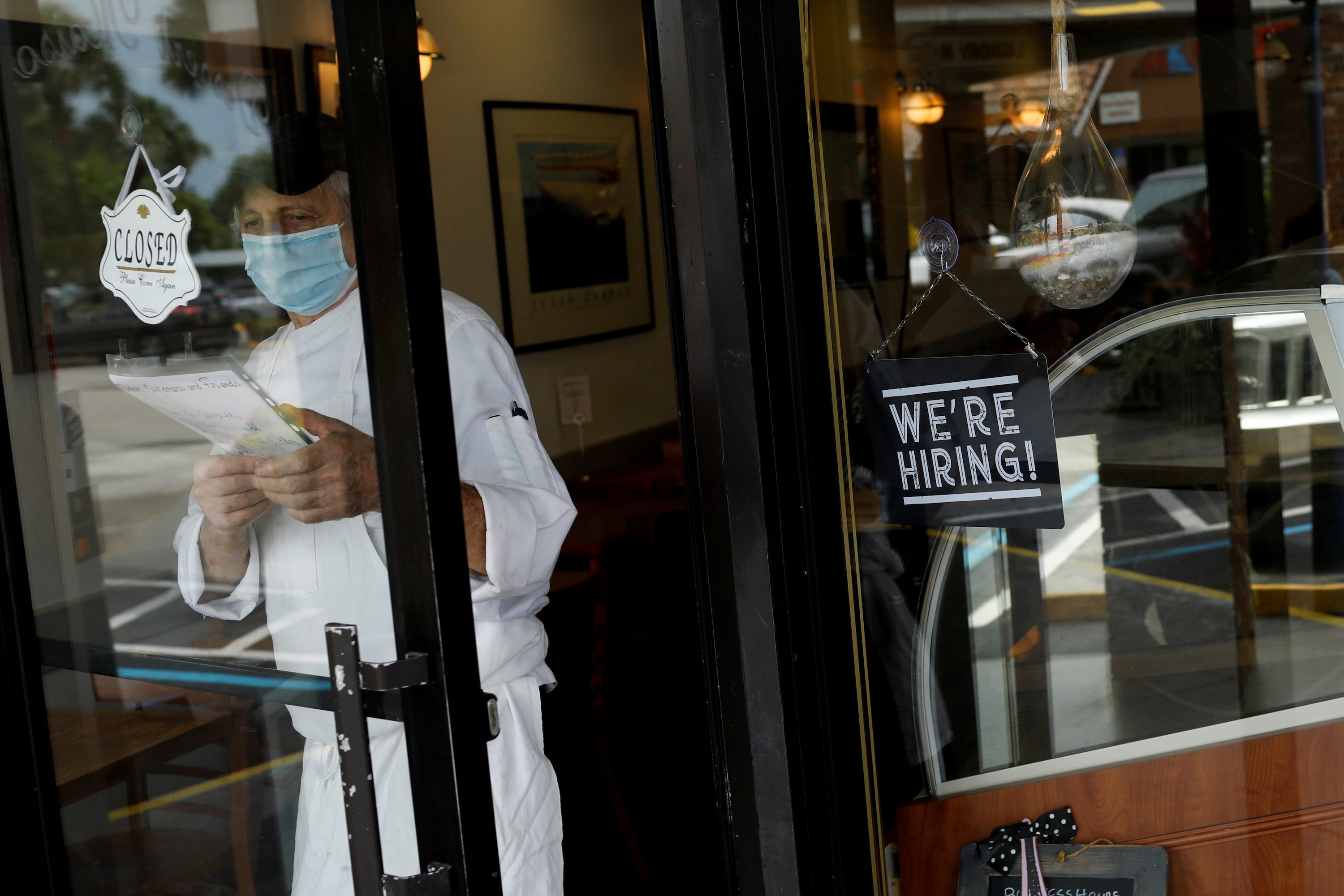 HIRING. A sign advertising jobs is seen at the entrance of a restaurant in Miami, Florida, May 18, 2020.

Facebook Twitter Copy URL
Copied
The US labor market is being boosted by an acceleration in the pace of COVID-19 vaccinations and the White House's recently passed $1.9-trillion pandemic relief package

US job openings rose to a two-year high in February while hiring picked up as strengthening domestic demand amid increased COVID-19 vaccinations and additional pandemic aid from the government boost companies’ needs for more workers.

The Labor Department’s monthly Job Openings and Labor Turnover Survey, or JOLTS report, on Tuesday, April 6, was the latest indication that the labor market had turned the corner after shedding jobs in December as the nation buckled under a fresh wave of COVID-19 infections and depleted government relief.

“Labor demand should continue to heat up as companies brace for a post-pandemic burst in pent-up demand,” said Lydia Boussour, lead US economist at Oxford Economics in New York.

Job openings, a measure of labor demand, increased 268,000 to 7.4 million as of the last day of February. That was the highest level since January 2019 and pushed job openings 5.1% above their pre-pandemic level.

The second straight monthly rise in vacancies lifted the jobs openings rate to a record 4.9% from 4.7% in January.

There were an additional 233,000 job openings in the healthcare and social assistance industry. Vacancies in the accommodation and food services sector, one of the industries hardest hit by the pandemic, increased by 104,000 jobs. Arts, entertainment, and recreation job openings rose 56,000.

But vacancies decreased in state and local government education as well as educational services and information.

Economists polled by Reuters had forecast job openings would rise to 6.995 million in February. The report followed on the heels of news on Friday, April 2, that the economy added 916,000 jobs in March, the most in 7 months.

The labor market is being boosted by an acceleration in the pace of COVID-19 vaccinations and the White House’s recently passed $1.9-trillion pandemic relief package, which is sending additional $1,400 checks to qualified households and fresh funding for businesses.

Demand for labor could increase further as more services businesses reopen. The US Centers for Disease Control and Prevention said on Friday fully vaccinated people could safely travel at “low risk.”

An Institute for Supply Management survey on Monday, April 5, showed services businesses reporting they “have recalled everyone put on waivers and made new hires” and had “additional employees added to service the needs of new customers at new locations.”

In February, hiring rose 273,000, the largest gain in 9 months, to 5.7 million. That boosted the hiring rate to 4% from 3.8% in January. Hiring was led by the accommodation and food services industries, which increased by 220,000 jobs. But hiring decreased in state and local government education.

Hiring still has a long way to go, with employment 8.4 million jobs below its peak in February 2020.

“The labor market continues to improve but remains a long way from what the Federal Reserve would describe as the conditions to restore maximum employment,” said John Ryding, chief economic advisor at Brean Capital in New York.

The US central bank has signaled it would maintain its ultra-easy monetary policy stance for a while to allow complete healing.

With unemployment well above pre-pandemic levels, competition for jobs remains tough. There were 1.4 unemployed people for every open job in February, well above 0.82 on the eve of the first wave of the pandemic lockdowns 12 months ago.

“This means employers will have an easier time hiring, but job seekers still don’t have the bargaining power they did prior to the pandemic,” said Nick Bunker, director of research at Indeed Hiring Lab.

Layoffs increased to 1.8 million from 1.7 million in January amid job cuts in the finance and insurance industry. The layoffs rate was unchanged at 1.2%.

“New strains of the virus and unwillingness to abide by health recommendations could extend the impact of the pandemic on the economy,” said Sophia Koropeckyj, a senior economist at Moody’s Analytics in West Chester, Pennsylvania. “In addition, the severity of the downturn, which closed many business, means that many industries will not bounce back immediately.”

The number of people voluntarily quitting their jobs rose to 3.4 million from 3.3 million in January. The quits rate was unchanged at 2.3%.

The quits rate is normally viewed by policymakers and economists as a measure of job market confidence. But the pandemic has forced millions of women to drop out of the labor force mostly because of problems related to child care, with many schools still only offering online learning. – Rappler.com