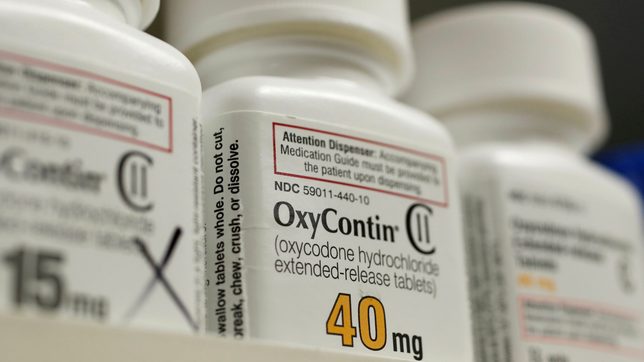 OXYCONTIN. Bottles of prescription painkiller OxyContin made by Purdue Pharma LP sit on a shelf at a pharmacy in Provo, Utah, April 25, 2017.

Facebook Twitter Copy URL
Copied
The Sackler family had contributed $4.5 billion to the bankruptcy settlement in exchange for protection against future litigation

A US judge on Tuesday, November 30, questioned whether members of the Sackler family that owned Purdue Pharma abused the bankruptcy system, as she considers whether to overturn a ruling that shielded the Sacklers from liability over the opioid epidemic.

US District Judge Colleen McMahon in Manhattan said she wanted more information about more than $10 billion that the Sacklers, according to court documents, received from Purdue between 2008 and 2018, when they left the company’s board.

“I’m looking for whether there was abuse,” she said during a hearing.

One Sackler family lawyer replied that there was no evidence to suggest abuse. The Sacklers have denied wrongdoing and did not themselves file for bankruptcy. They contributed $4.5 billion to the bankruptcy settlement in exchange for protection against future litigation.

McMahon’s remarks came during arguments over appeals of a bankruptcy court’s approval in September of Purdue’s reorganization plan, which included releases of future opioid-related civil claims against the Sacklers.

The US Department of Justice’s bankruptcy watchdog and a small group of states are challenging the plan’s approval, claiming the Sacklers should not receive the legal protections it provides.

McMahon suggested that the Sacklers may have protected their wealth by taking as much money from Purdue as they could in the years before the bankruptcy.

“People were aware claims were going to be asserted. Advisors told them to take steps to protect the family,” she said.

A lawyer for the Mortimer Sackler side of the family, Maura Monaghan of Debevoise & Plimpton, told the judge there was “not a shred of evidence” that the Sacklers made any decisions with the intention that Purdue would ultimately wind up in bankruptcy. She noted that the Sacklers left the Purdue board in 2018, before the 2019 bankruptcy filing, and that the last distributions they received from the company occurred around 2016.

Monaghan said the judge’s concern about potential bankruptcy abuse “would be based on nothing but speculation.”

But the judge said she may send the matter back to the bankruptcy judge who approved the deal this fall.

Around 500,000 people have died from opioid overdoses since 1999, according to the Centers for Disease Control and Prevention. Purdue filed for bankruptcy in September 2019 in the face of 3,000 lawsuits accusing it and Sacklers of contributing to the opioid crisis. – Rappler.com