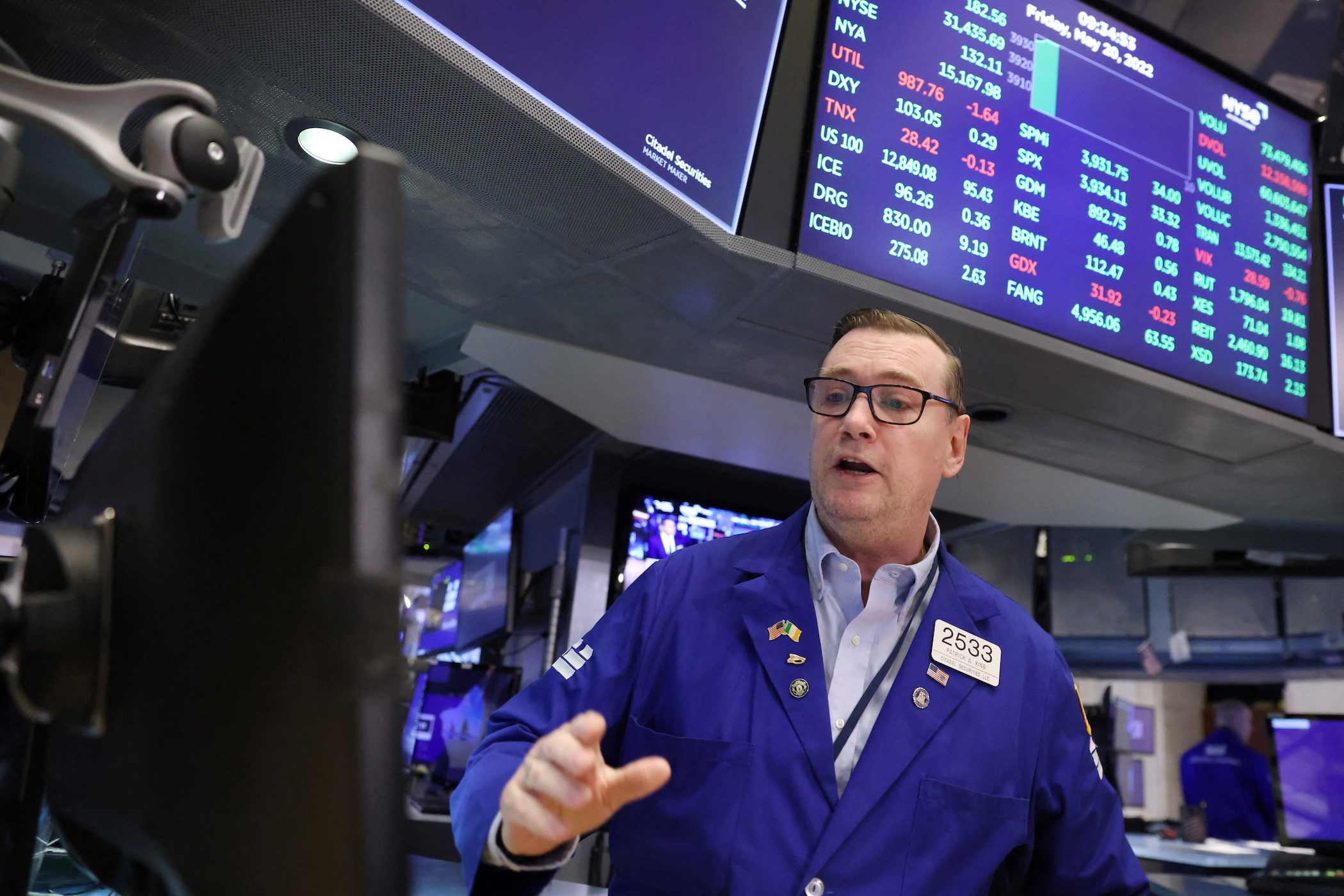 NYSE. A trader works on the trading floor at the New York Stock Exchange in Manhattan, New York City, May 20, 2022.

Trading was choppy as investors awaited an ECB meeting on Thursday, June 9, and US consumer price data on Friday, June 10, that will highlight the dilemma they face. As central banks tighten policy to tame inflation, it could spark an economic slowdown.

The White House said it expected the headline inflation number on Friday to be “elevated.” Economists expect annual inflation to be 8.3%, according to a Reuters poll.

Adding to inflation concerns was a surge in crude oil to 13-week highs, while Exxon Mobil shares closed at a new record for the first time since 2014.

Investors are worried about the economic outlook and its effect on results. Citi Research analysts cautioned that Intel Corporation could pre-announce weaker-than-expected earnings for the second quarter. Intel’s shares fell 5.3%.

Target roiled markets on Tuesday, June 7, when the retailer cut its profit margin forecast after reporting a much steeper drop in quarterly profit in May than expected. Other companies will follow and challenge second-quarter results, said Philip Orlando, chief equity market strategist at Federated Hermes.

“The market is rolling over here and will at a minimum retest that 3,800 level that we saw in early May over the course of the next couple of months, and it may go a little bit below that,” he said. He called the recent rally a dead-cat bounce.

The S&P 500 almost confirmed a bear market when it slid more than 20% from its record closing peak on January 3 to an intraday low of 3,810.32 on May 20, but the benchmark closed higher.

The pan-European STOXX 600 index fell 0.57% as concerns about growth weighed on banking shares, while MSCI’s gauge of stocks across the globe fell 0.56%.

Data showed the eurozone economy grew much faster in this year’s first quarter than the previous three months, despite the war in Ukraine, the European Union statistics office said, as it revised earlier estimates sharply higher.

Investors raised their bets on ECB rate hikes, and money markets priced in 75 basis points of rate hikes by September.

German and US Treasury yields rose after the euro area GDP data beat expectations, adding to bets of a more hawkish ECB.

The Organization for Economic Co-operation and Development slashed its growth outlook to 3% this year from 4.5% forecast in December. The OECD also raised its inflation estimates, though it said there was a limited risk of “stagflation.”

The euro hit a seven-year peak against the yen, getting a lift from the upward revision to first quarter growth. Against the dollar, the euro was up 0.12% to $1.0712.

The dollar index rose, while the US currency hit a fresh 20-year high against the yen. The yen weakened to hit 134.47 per dollar, its softest since February 27, 2002.

Asian stocks strengthened overnight, with Chinese stocks seeing some relief from easing of COVID-19 restrictions, but sentiment was volatile and European indexes fell soon after opening.

Oil prices rose about 1% as US crude hit a 13-week high despite a rise in domestic crude inventories, as supplies looked likely to tighten with China easing lockdowns and Norwegian oil workers planning to strike.

Gold inched up in choppy trade as concerns over economic growth boosted the metal’s safe-haven appeal.