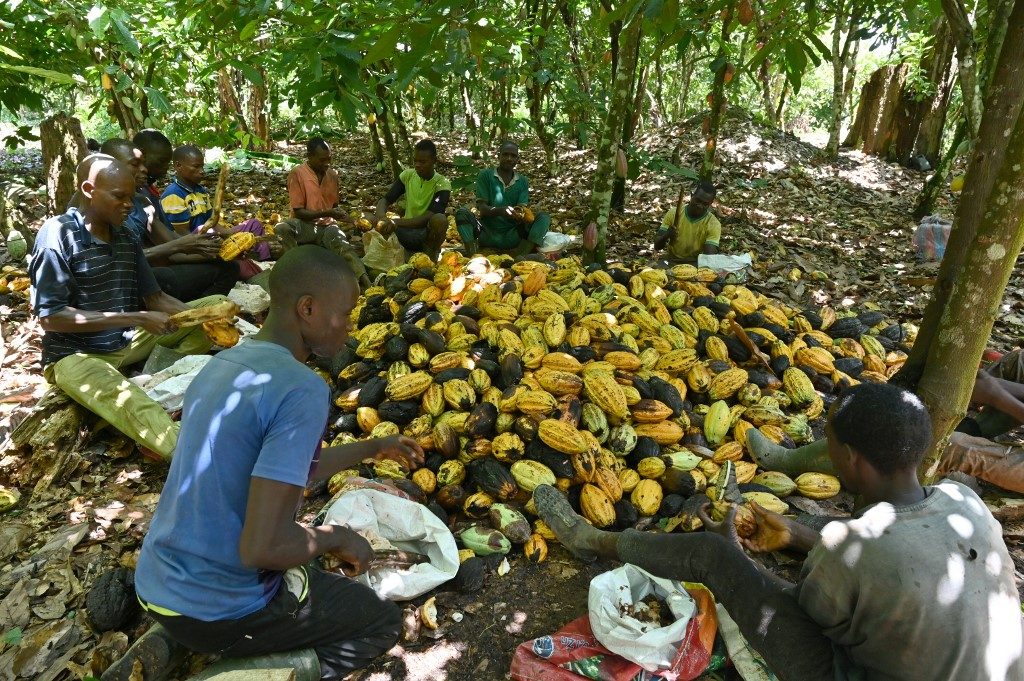 Cocoa farmers break cocoa pods in a plantation near Guiglo, Ivory Coast, on October 10, 2020. - Last week President of Ivory Coast Alassane Ouattara anounced an increase of the price of cocoa from from 825 to 1,000 CFA francs (from $1.48 to $1.79) a kilo ahead of the country's October 31, 2020, presidential election. (Photo by Issouf SANOGO / AFP)

Facebook Twitter Copy URL
Copied
The state of the cocoa market is a boon for buyers, but a curse for planters in tropical countries, who receive only 6% of the $100 billion generated by the global cocoa and chocolate industry each year

Ghana and Ivory Coast account for two-thirds of the world’s cocoa supply, but unlike oil-producing countries, they are unable to influence prices that are historically too low to meet the basic needs of small planters.

“They could decide the market prices, above all if they allied themselves with other major producers like Ecuador, Cameroon, and Nigeria, but there’s a lack of real political will,” an industry expert said on condition of anonymity.

Abidjan and Accra only began to work together seriously in 2019, when they obtained a living wage premium from cocoa and chocolate multinationals such as Nestle of $400 (341 euros) per ton of cacao beans.

The non-governmental organization Fairtrade promoted the “living income reference price” on the basis of a study of the essential needs of planter households, plus a provision for emergencies, according to Fairtrade. It has been applied to the 2020-2021 crop, which started this month.

For the first time in years, the neighboring west African countries have matched their cocoa prices to halt a thriving traffic in cocoa beans between Ivory Coast, with its 40% of the world market share, and Ghana, in second place with more than 20%.

“The decisions of Ivory Coast and Ghana count, but there is slight overproduction of cocoa and the coronavirus crisis is reducing demand,” said Jonathan Parkman of the brokerage company Marex Spectron.

Parkman was not even sure whether the income premium would last beyond the current season.

The analyst noted that cocoa prices are speculative, as with certain other agricultural products, with prices partially disconnected from the real economy.

On the stock exchanges in London and New York, cocoa contracts for 30 times global production change hands each year.

In real terms, cocoa prices are just half of what they were in the 1960s, and just a quarter of the peaks they hit in the mid-1970s – the apogee of the Ivorian “economic miracle” – according to the World Bank.

The state of the market is a boon for buyers, but a curse for planters in tropical countries, who receive only 6% of the $100 billion generated by the global cocoa and chocolate industry each year.

In public, multinational giants like Barry Callebaut and Mondelez show their support for the living wage premium, while consumers are pressing demands for a “more ethical” cocoa trade.

“The coordination of Ivory Coast and Ghana is a very positive factor,” said Patrick Poirrier, chairman of French chocolate group Cemoi and president of a producers’ syndicate.

“It’s in their interest to expand their power to act on the market.”

Cocoa has no tap

Cocoa-producing nations face major obstacles, however, if they wish to exercise control over the market the same way as the Organization of the Petroleum Exporting Countries (OPEC) has done for oil.

For starters, the amount of cocoa produced annually cannot be managed “like turning a tap on and off,” Poirrier said. “It’s difficult to ask a cocoa farmer, who makes a 20-year commitment when he plants a tree, to produce less.”

For two decades, the global crop has been in excess of demand one year in every two, to the benefit of buyers seeking to push prices down.

The lack of capacity to store cocoa, a fragile and perishable commodity, close to the site of the harvest adds difficulties near the very start of the supply chain.

Late in September, Ivory Coast announced the building of two storage warehouses with a total capacity of 300,000 tons at the ports of Abidjan and San Pedro.

To establish an OPEC equivalent for cocoa, all the producer countries should participate, said Philippe Fontayne, former chairman of the International Cocoa Organization.

“But I’m very skeptical about their ability to agree on the rules of the game,” he said.

Some industry players have not forgotten the failure of the Alliance of Cocoa Producing Countries – formed in 1962 by Brazil, Cameroon, Ghana, Ivory Coast, and Nigeria – to make any impact on the world market.

The Cocoa-Coffee Board, responsible for managing the twin sectors in Ivory Coast, declined to comment to Agence France-Presse. – Rappler.com