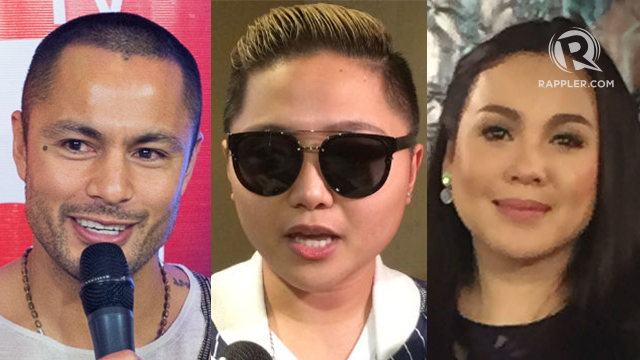 MANILA, Philippines – Even celebrities cannot get enough of the tandem of Alden Richards and Maine Mendoza aka Yaya Dub.

The AlDub tandem was born out of Eat Bulaga’s “Juan For All, All For Juan” segment, where the characters Alden and Yaya Dub are in love, but kept apart by Yaya’s boss, Lola Nidora.

Since July, the tandem has had audiences hooked on every step of the way of Alden and Yaya Dub’s quest to be together. The two had their much anticipated date last September 19 and although it was cut short, Lola Nidora said there might be another date in the future. (READ: #AlDub: The fun tandem of Alden Richards and ‘Yaya Dub’)

A number of celebrities and prominent personalities have also confessed they are big fans of the tandem. (READ: Filipinos tweeted 12 million times for AlDub’s romantic date)

Let’s take a look at a few:

Marimar star Tom Rodriguez watches the kalyeserye while working out.

Sunshine Cruz took a selfie with Alden Richards himself.

Claudine Barretto professed her love for AlDub during the “Sa Tamang Panahon” event.

Derek Ramsay was at “Sa Tamang Panahon” too!

Manila Mayor Joseph Estrada took time to watch the segment in between his work at the office.

Actress Judy Ann Santos, who is pregnant, had a photo taken with Alden.

Actress Carla Abellana was excited Alden and Yaya finally saw each other in person.

Charice does the pabebe wave.

Actress Rhian Ramos did the pabebe wave with Alden.

K Brosas also admitted to being a fan of the tandem.

Bryan White, who performed the song “God Gave Me You,” got so curious about the tandem, that he followed Alden and Yaya Dub on Twitter. On Facebook, Bryan posted a short message, saying he might come to Manila soon.

To all my Filipino fans. Thank you for so much support. It means so much to me. We are coming to see you very soon!!!! Can't wait to see you! #GGMY  #ALDUBNextChapter