Why does everyone seem to love ‘AlDub’?

Oct 5, 2015 2:16 PM PHT
Facebook Twitter Copy URL
Copied
Are you an 'Alden,' a 'Yaya Dub,' or a 'Lola Nidora'? Writer Ron Lacson examines why he loves AlDub and reflects on the characters present in all of us 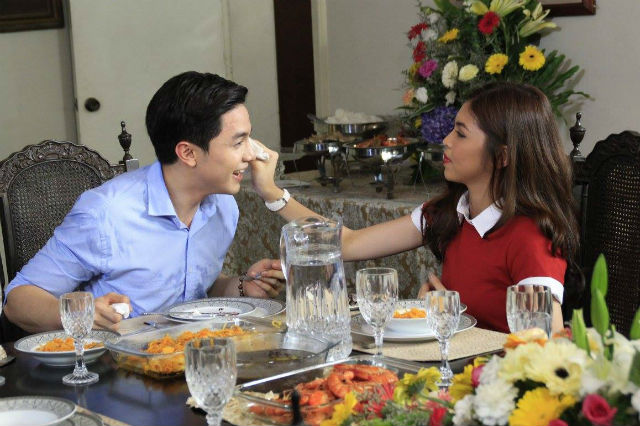 Unless you live on another planet (Mars, for example), you should be familiar with AlDub, or at least have heard about it.

As I write this (Saturday, October 3), the players of the segment ‘Kalyeserye # Kilig Pa More’ have just visited the Broadway Studio, marking the first time that Tito, Vic, and Joey meet Yaya Dub. (#AlDub recap: Yaya Dub sings for Alden, fans get an Aldub duet)

Previously, the tweets generated from an AlDub episode reached over 25 million. From whichever angle you look at it, that’s an extraordinary feat for any noontime TV program, including the 36-year-old Eat Bulaga. (Twitter exec commends #AlDub: ‘It’s a global phenomenon’)

OK, let me repeat that; over 25 million tweets in just 24 hours for the previous episode, starring Maine Mendoza (Yaya Dub) and Alden Richards, supported by the Explorer Sisters (all are ‘Lolas’) being played by Wally Bayola, Jose Manalo and Paolo Ballesteros. Of the 3, Wally as Lola Nidora is this somewhat maternal figure who gives advice and puts forth the mood of every scene (when she’s masungit, bad trip lahat; when she’s happy, happy lahat).

Imagine an ordinary Filipino household where family members of all ages – lolo, lola, tatay, nanay, kuya, ate, bunso, the teenagers and the over 30s and the over 40s, the toddlers, the kids and the parents, the over 50s and those with dual citizenship (Filipino & Senior Citizen) – are all glued to the screen, when each Kalyeserye episode starts. People from all classes – A,B,C,D and E – have strongly and rapidly developed a penchant for watching AlDub. I can’t say that I know of any other Philippine TV show that had this achievement.

With the sensational popularity of the show, it’s hard not see a few memes that would elicit laughter with sneaky double meaning. One of them which I find funny is the one where a picture of Heneral Luna (John Arcilla) is seen saying “Yaya Dub o Maine??? Mamili ka!!!” (or “Yaya Dub or Maine? Choose!” – a parody of the character’s line in the movie – “Bayan o Sarili? Mamili ka!” or “The country, or yourself? Choose!”). I’m sure there are other memes that are equally hilarious. (#AlDub: The fun tandem of Alden Richards and ‘Yaya Dub’) 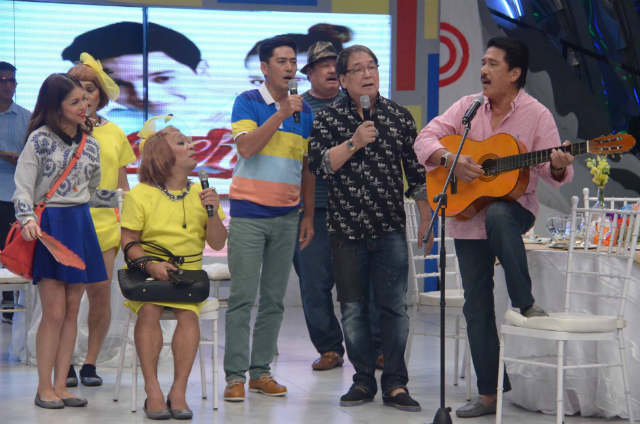 It is not easy to understand the reasons behind this phenomenon. It’s not even surprising to hear someone who would say that this doesn’t make sense. How can just a module of a show be endearing to millions? Why is it being followed by Filipinos across the globe? There are always cynics and haters of course. (READ: Joey de Leon addresses Lea Salonga’s ‘kababawan’ tweet)

And this, more direct to the point:

Maybe it’s true. Maybe we Filipinos are “mababaw ang kaligayahan,” (easy to please) and it’s not necessarily a weak attribute as in “mababaw” or shallow. It merely describes that we can be (or should be) happy with simple things in life; we can experience joy just by looking forward to an uncomplicated destiny; we are delighted by clean and unadulterated entertainment, devoid of profanity and rude conversations. (Lea Salonga clarifies ‘kababawan’ tweet not about AlDub after fan outrage)

And this characteristic often prompts us to have the courage to laugh at our mistakes so we can rise from failures and move on. It also brings to surface the unchallenged truth that as long as we are alive, there would always be some areas in our life where our happiness is easier to come by.

I don’t think enjoying AlDub implies that you are any less smart. We know of doctors, nurses, engineers, lawyers, writers, politicians, artists, mathematicians, science enthusiasts, heads of companies, etc., who follow Kalyeserye and are having wonderful time watching AlDub. I’m sure they’re all savvy and clever.

Happiness has little to do with intelligence. And sadly, those who are saying that watching a noontime show is ‘mababaw’ and implying that bright people should instead spend time worrying about the future of our country, are themselves “mababaw” – “mababaw ang kanilang pang-unawa sa mga mamamayan ng bansa.” (shallow, in the sense that their understanding of Filipinos is shallow.)

Some (not all) wiggle their eyebrows and think highly of themselves while looking down at the “mababaw” crowd as if this perceived shallow throng is less able to be part of the solution to the challenges of our country.

They’re wrong, of course; that obtuse reasoning is commonly just a product of misconception or perhaps, inflated egos. Sadly when confronted, most would only say that they don’t get it or that they don’t understand. Well, the principle is also not “malalim” or deep, it’s uncomplicated. We do not have to understand everything in order to experience joy and jubilation.

If we just hold our judgement and maybe seek a way to hear their stories (what makes them happy), then maybe, just maybe, we won’t overlook their adept qualities.

Then there is Lola Nidora. She is there, helping us reminisce about those forgotten traditional values. We all love to remember how things used to be. The character Nidora reminds us of our loving grandmas and/or mothers who would always instill discipline, values and the appropriate gestures on how we should deal with people outside our home, particularly when it comes to courtship.

The old days were without Internet and Google; so we were getting most of our information from our elders who were guiding us and training us – the traditional way. Far cry from the exploits of some whippersnappers and youths these days who usually hurry to get the things they want, Kalyeserye promotes patience and delayed gratification; good things will come at the right time.

As Lola Nidora so valiantly delivered in one episode – “Pa text text lang, kayo na agad, hindi pwede yan.” Forbearance is a virtue. Everything is sweeter in the right time. Love is loveliest at the decent time.

Other things that we do see on this show are: ‘pagmamano sa matanda,’ ‘not answering back to elders, not sitting when you aren’t told to be seated…yet (discouraging presumptuousness and arrogance), dressing aptly (no unnecessary showing of flesh), panghaharana (serenading), asking permission for important events like dates, handwritten love letters (when did we last do this?), true grit and resilience. I probably missed some, but I think we all get it.

Kalyeserye is also is shown live. It isn’t a taped series. Yes, there is a theme, there is a general story each episode, but many improvisations are being done by the actors when the cameras start to roll. 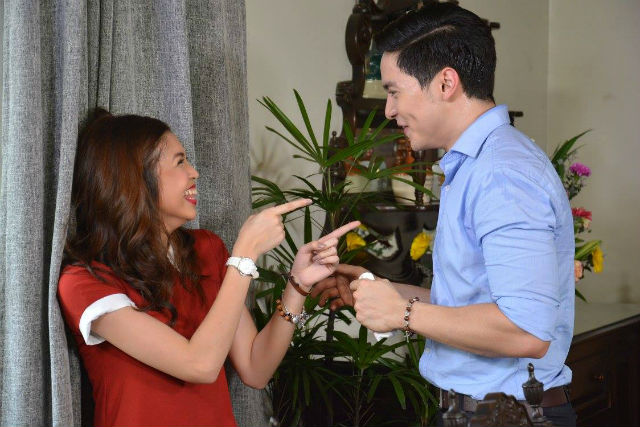 Obviously the lead characters are very likeable. Alden Richards is handsome. Maine Mendoza (Yaya Dub) is beautiful and sweet. But more than that, they both seem to be nice and agreeable people in real life. They are impressive in that they’re very nice to their fans. They’re always thankful. Followers of Kalyeserye see these traits as extensions of the AlDub characters; and undoubtedly people always have more admiration for celebrities who are amiable and pleasant in real life.

And then there are the songs. Pinoys love music, and it’s great to see the conversations between Alden and Yaya Dub done through song or lip sync, complete with facial expressions and body movements. We now have become familiar with the songs ‘God Gave Me You,’ ’Thinking Out Loud,’ ‘Wish I May,’ etc.

Additional kilig factor: the exchanges of notes. And these are handwritten (not text via smart phones), undeniably more personal and more sincere, a demonstration of love that that defies distance. It is true love that braves Mr Plywood, endures long tables and ignores men with dark glasses (the Rogelios). It’s love that penetrates the split screen.

All these, without skepticism, contribute to the kilig moments. And as a result, we all have learned to love AlDub.

In this time of political upheaval when we never cease to discern and look for future leaders who MUST understand the importance of trust, AlDub is a breather, an important pause for us to regain our strength in facing challenges, and a necessary break to rekindle our passion in discovering what life has to offer and what we can give in return.

In this day and age of Filipino diaspora when millions of Pinoys are living and working in many countries of this planet; and when OFWs are considered heroes in name, but sometimes inadvertently treated as non-integral members of the nation (remember the treatment of BOC to OFWs), Kalye Serye’s/AlDub’s concept has become an inspiration.

It ignites our sense of belonging and reminds us that the native land many Filipinos left and are longing to see again, is still the country with cheerful people; and is still the Philippines that takes pride in its noble values.

The stealthy truth is that we are all characters in the Kalyeserye. We can be ‘Alden’ and ‘Yaya Dub’ who are in love and are facing many obstacles and persevering, OR we can be the ‘Lolas’ who are always on the lookout, ready to give advice or help; OR we can just be the ‘Rogelios,’ who just stand, watch, do nothing and will not move a muscle unless told to do so. It’s our choice.

AlDub’s brouhaha and buzz will fade one day, we all know that. It may reach a saturation point. It happens to all great fads. But while it’s still here, one thing we can do is just enjoy the entertainment value, savor the moments, and absorb the relevant values we can truly learn and apply in life. – Rappler.com Ron R. Lacson works as an engineer in Hong Kong and is a freelance writer at the same time.  He writes regularly for an international magazine in Hong Kong.