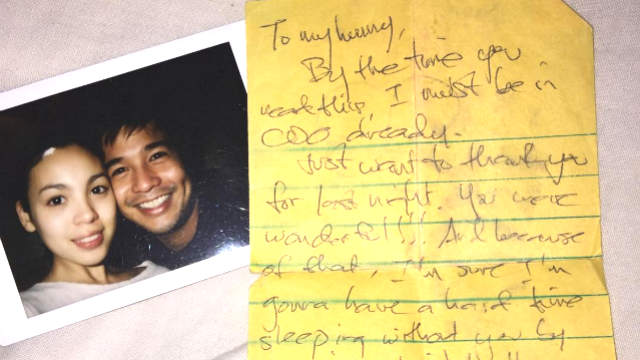 MANILA, Philippines – Claudine Barretto remembered her ex-boyfriend, late actor Rico Yan, by sharing one of his handwritten letters for her, plus a Polaroid shot of them together.

“We @tinamarieyan miss u terribly,” Claudine wrote on Instagram on Sunday, December 27. Tina is Rico’s sister.

By the time you read this, I must be in CDO already.

Just want to thank you for last night. You were wonderful!!! And because of that, I’m sure I’m gonna have a hard time sleeping without you by my side tonight. 🙁

But nevertheless, I still love you very much! MWAH!!”

We @tinamarieyan miss u terribly

Rico died on March 29, 2002 due to hemorrhagic pancreatitis while on vacation at Dos Palmas Resort in Palawan. He and Claudine were considered one of the top 90s love teams.

Claudine went on to marry actor Raymart Santiago in 2006, but they separated in 2013 after Claudine accused him of physical violence. The two have said they are being civil for their two children, but will not get back together. (READ: Raymart Santiago says no second chance for him and Claudine)

Claudine made a comeback in showbiz this year, appearing in the movie Etiquette for Mistresses. She is set to appear in a new drama in 2016. – Rappler.com