Deramas died of a heart attack at 49 years old. According to ANC tweets, Deramas “almost had a heart attack 2 years ago” and had an angioplasty the previous year.

At his wake, his family was not only mourning his death, but also that of his sister, Myra Ann Deramas, who also died of an heart attack on February 29. Wenn died shortly after his sister. 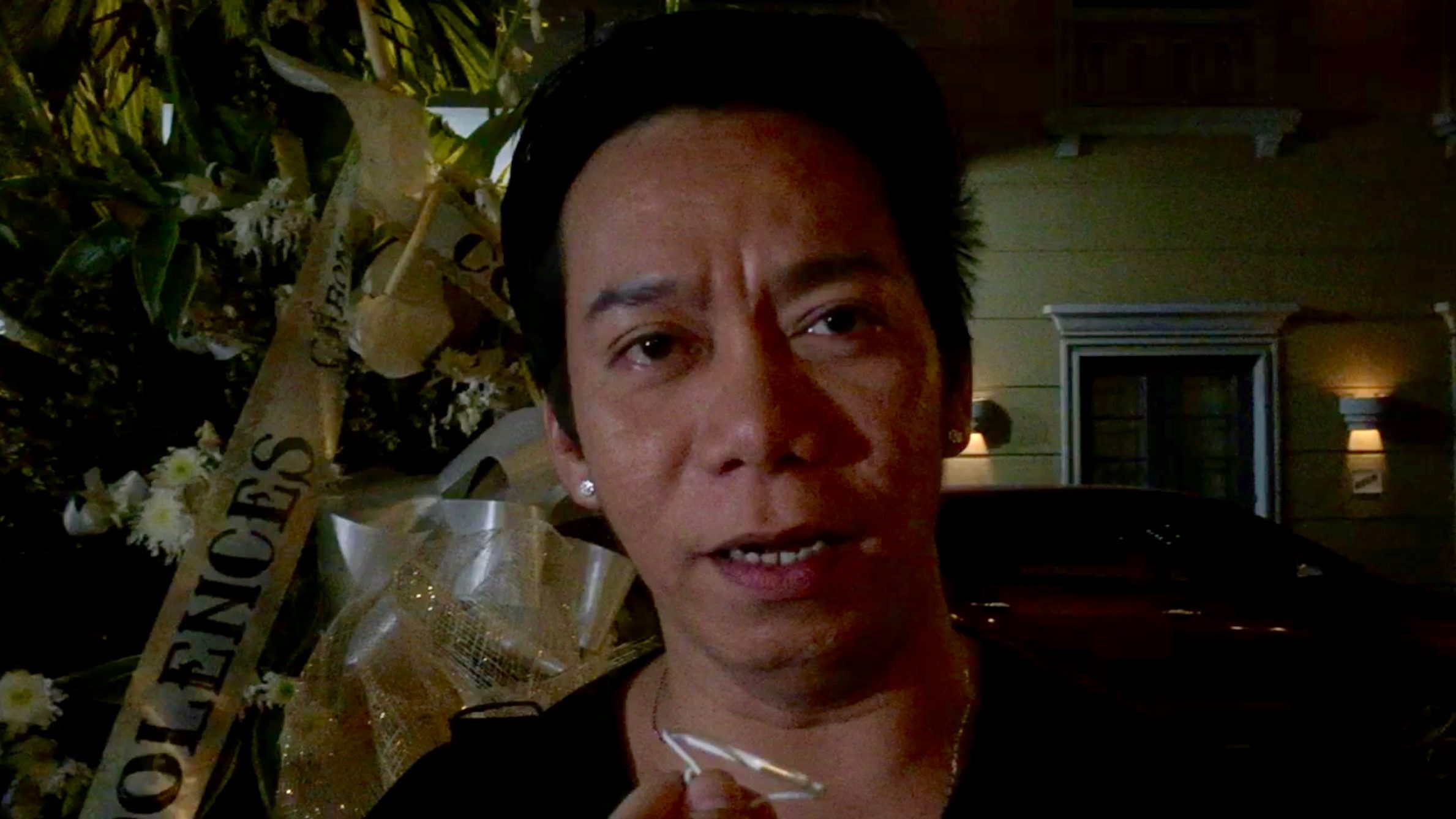 (It all started with our first movie, This Guy’s in Love with You Mare, I will never forget that he would always help me. Because it was my frist movie, so I was nervous… and [I’ll remember him] not just as a director, but he became my friend as well. He was always trying to make us laugh.)

Lassy shared that the last time he saw Deramas was at the Beauty and the Bestie victory party. The movie was reportedly the highest grossing 2015 Metro Manila Film Festival entry.

(The last text I read was about eternal life. That was his last text. And the next day, that was it.)

Watch the video below to hear Lassy’s message for the late director.

Lassy, who worked with Wenn Deramas on Beauty and the Bestie, gives a message to the late director. @rapplerdotcom pic.twitter.com/0aX6IqcfPE 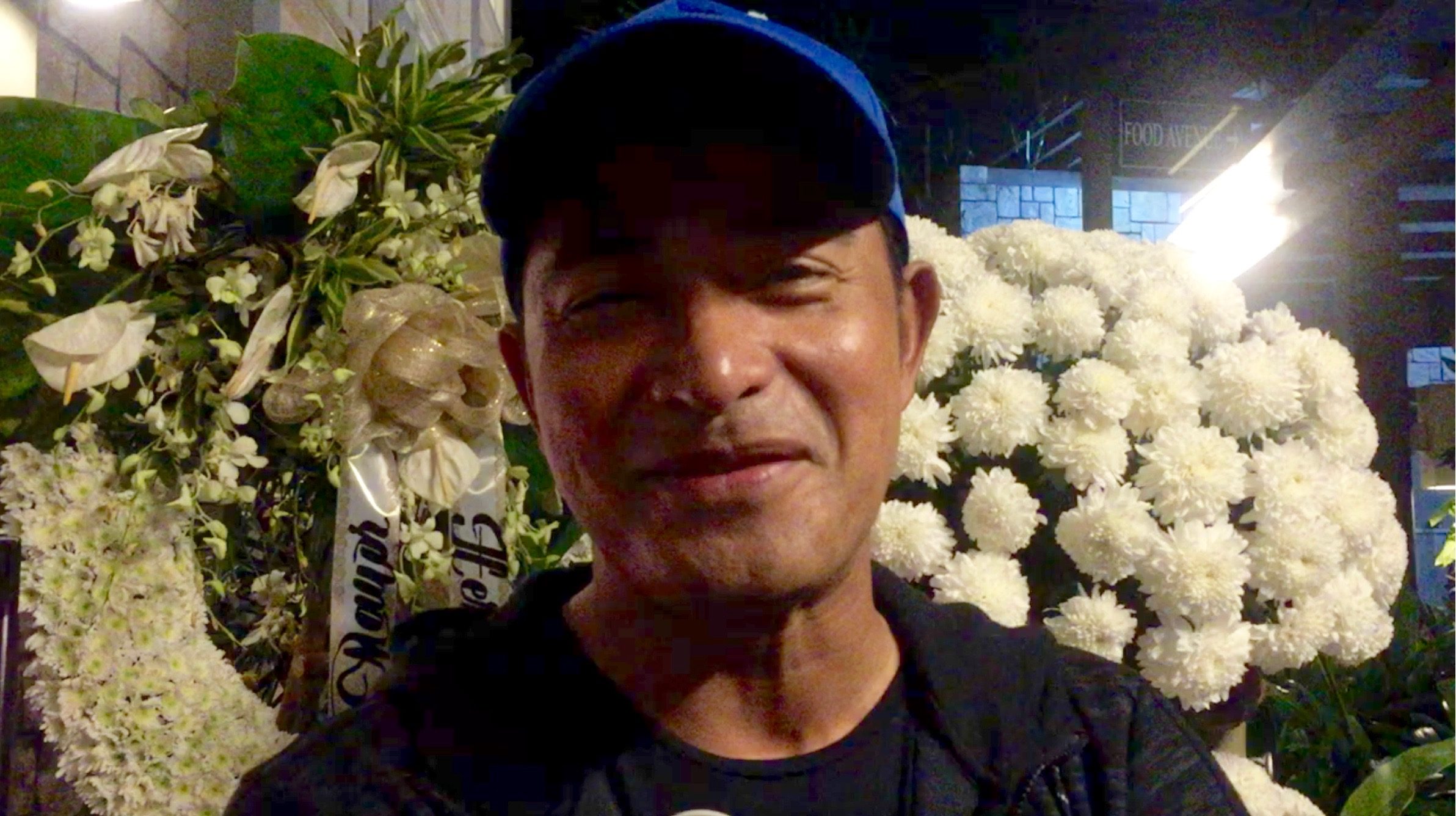 Though action star Cesar Montano never had the chance to work with Deramas, he was close to Deramas because they were next-door neighbors. Montano remembered that he would visit and talk to Deramas every New Year’s Eve.

([He contributed] a lot of beautiful comedy, drama films, with Ai-Ai (delas Alas) and others that really can’t be replaced, can’t compare to others, that gave joy to our countrymen and to those who love Filipino movies.)

John “Sweet” Lapus was at Deramas’ wake on March 4 as a member of the Teatro Tomasino, the University of Santo Tomas’ theater guild that both he and Deramas were a part of.

Hear his message to the late director below:

Unsurprisingly, many have been curious about what comedian Vice Ganda had to say about the late director, as he had worked with Deramas on several films including the 2015 Metro Manila Film Festival entry Beauty and the Bestie.

Vice spoke on Tonight With Boy Abunda on Thursday, March 3, live from the wake at Arlington Memorial, Quezon City.

On the show, Vice remembered the late director, sharing some things about Deramas’ life that not many people knew.

(We had plans to make a superhero movie, he’s been wanting to make me play Darna since before. He said, ‘You should play Darna.’ It was always his next project, Darna, but we couldn’t do it because there was already a Darna.)

Vice explained that the Darna movie that is set to be released in 2016 had to made first before they could make their own version of it.

The comedian added that just that day, someone approached him with a certificate for Deramas. Vice said that Deramas had helped two children with congenital heart problems by donating money for their medical care. Deramas, however, had been a silent donor, and hadn’t told anyone.

Before his interview on Tonight with Boy Abunda, Vice also talked about his friendship with the late director during the mass sponsored by Star Cinema.

He then shared about the roles he played in the movies he made with the director. Vice said he was not prepared for the role he was going to play next.

“Ang pinakamahirap na role na binigay mo sa akin, yung role na mamili ng kabaong noon isang araw,” Vice said as he broke into tears. (The hardest role you gave to me was the role to choose a coffin the other day.)

Vice also said that the director was always strict about time.

Vice during his speech before the people of Star Cinema about Direk Wenn. pic.twitter.com/LuhfYxNsrW

Vice then said he made sure that what Deramas was going to wear was suitable. He later got the suit made by designer Avel Bacudio, whose design, according to Vice, the director would have used for the upcoming Guillermo Awards this April.

Deramas had produced many movies with Star Cinema, and on March 3, Star Cinema managing director Malou Santos spoke to ABS-CBN’s Bandila about the director.

(Director Wenn was a big part of Star Cinema becuase of the many movies he made with us, all that his movies earned that he gave to us and the company, and not only to the company, to all who watched his movies. He was like our brother, part of the family, a friend.)

Both Vice and Malou have both wondered who in the industry would continue to make Deramas’ signature comedies, which are staples at the annual MMFF.

A few days ago, actor DJ Durano told Bandila, “‘Di ako makapaniwala kasi kailan lang nakaktext na may gagawin kaming proyektong bago.” (I can’t believe it because it was just recently that we were texting about a new project.)

(He wasn’t a selfish person, director Wenn, epecially to the artists he knew were capable. I feel like I lost a sibling, I lost an older sister… We must admit, it’s severe, it’s a big blow to the industry, the loss of one Wenn Deramas.)

Bernal also praised Deramas, remembering when she was an editor on the movies that he directed: Dahil Mahal na Mahal Kita and Mula sa Puso.

Singer and actress Sarah Geronimo worked with Deramas on Hating Kapatid in 2010. She was at the wake with boyfriend Matteo Guidicelli, and spoke to Pep about the late director.

Comedian Ai-Ai delas Alas posted a photo of herself with Marvin Agustin, Shaina Magdayao, Gerald Sibayan after they visited the wake.

As seen on Bandila, actress Meryll Soriano tried to hold back her tears when she was asked about Deramas: “Nako, nakakiyak ‘yan. Basta direk Wenn, I love you so much. Sabihin mo na yung punchline diba, [na] hindi totoo itong lahat.

(Oh that will make me cry. Wenn, I love you so much. Just say the punchline, right, that none of this is real.)

“Pinaglaban niyan ako eh (He fought for me). He really believed in me, so I owe him a lot. But the real essence of direk Wenn is really helping out people, and you know, fighting for people na wala namang boses (who don’t have voices).”

(At the premiere of Everything About Her, I bought water from the cinema vendors. When I already had to pay, I said, ‘Oh no, I forgot my wallet’ Then he gave me some money and said, “This one’s on me! You have so many shows, but you don’t even have 50 to spare!”)

Along with his castmates in Moron 5 and the Crying Lady, Luis also told Bandila that he wanted to wear his costume at the necrological service. “Choice ‘yun ni Momski, na to be remembered this way na isang tao na nagpatawa, nagpasaya ng napakaraming tao,” Luis said. (That’s Momski’s choice – to be remembered as a person who made so many people laugh and be happy.)

On March 3, many other celebrities paid tribute to the late director, including KZ Tandingan and Yeng Constantino, who each performed songs. 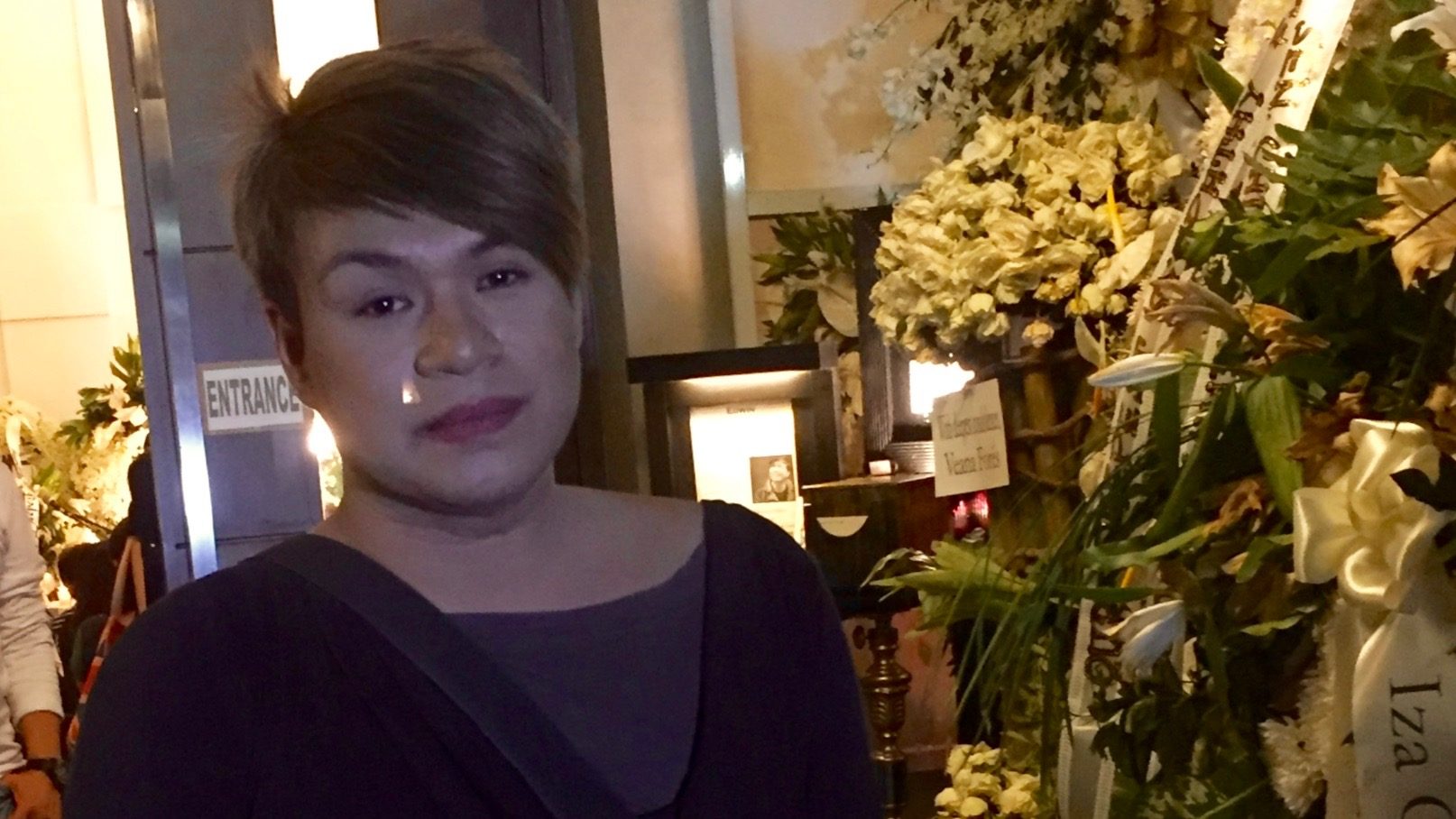 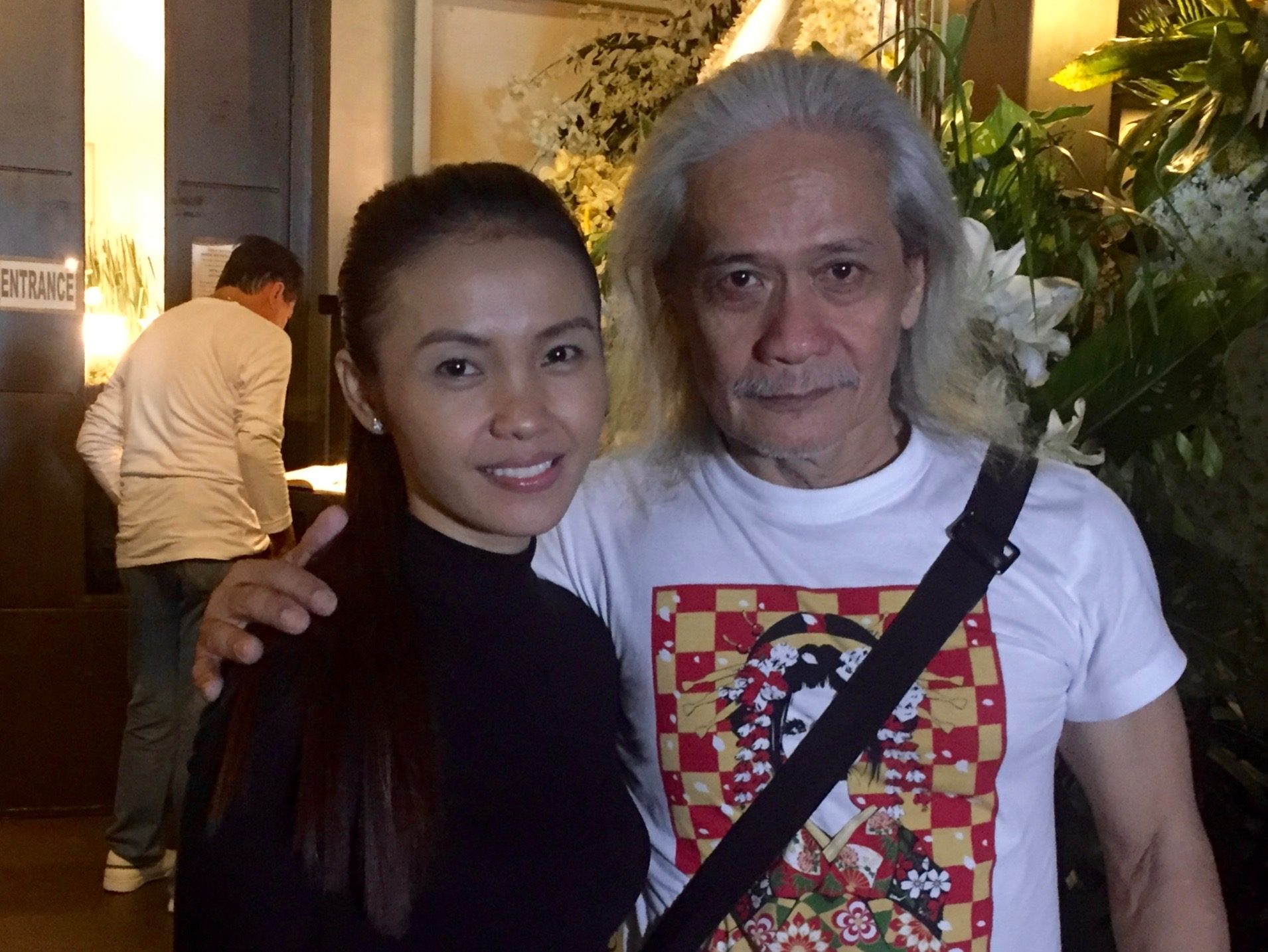 Deramas’ wake began on Monday, March 1. He will spend a night at the Dolphy Theater at ABS-CBN’s studios on Saturday. The late director was loyal to the network.

His funeral will be held on Sunday at Himlayang Pilipino, Quezon City. – Rappler.com