Macky Mathay confirms he and Sunshine Cruz are dating 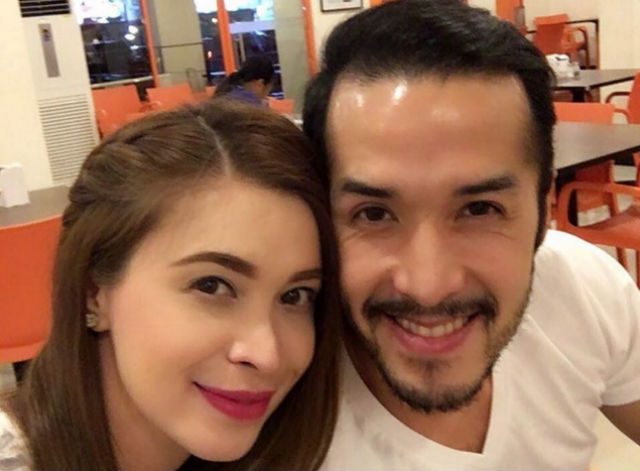 MANILA, Philippines – After rumors and a report linking him with Sunshine Cruz, Macky Mathay, the half-brother of actress Ara Mina, said that he and Sunshine are dating.

In an interview with Pep, Macky said that he and Sunshine started seeing each other  sometime in September. He also said that it all began when he sent a direct message via Instagram.

“Well, actually, it’s as simple as I sent her a direct message on Instagram. Ganun kasimple. (It was that simple)

“And then after, I sent her my ‘Hi’ message, dinugtungan ko kaagad ng (I followed it up with a ) second message,” he said, adding he mentioned he was Ara’s brother.

Macky said that it was perfect timing because Sunshine was with Ara in Brunei when she got the message.

Macky also talked about the photo of him and Sunshine holding hands that went viral.

“We were on our way to watch a movie

“I guess, pag titingnan mo yung picture, talagang mukhang selfie, di ba? (I guess, if you look at it, you think it was a selfie right?)

“Siguro nahiyang magpa-picture kasi nasa kalagitnaan nga ng pagtawid,” he said. (I guess he was shy to have a photo taken because we were in the middle of crossing.)

In the same interview, Macky said it was him who first said I love you to Sunshine.

“Sabi ko (I said), ‘Before I finally said I love you, matagal kong pinag-isipan. Kasi since matagal ka nang hindi nagka-relationship, baka hindi ka pa handa. (I really thought about it. Because since you have not been in a relationship for a long time, you might not be ready.)

“’I don’t want to rush you into anything,’ sabi ko, ‘Kasi nararamdaman ko naman para sa ‘yo ay makakapaghintay naman.’ (I told her what I’m feeling for you, I can wait.)

Macky said that he and Sunshine have become comfortable with each other even before getting together formally.

“Sinasabi ko kay Sunshine, ‘Everything happens so fast between the two of us, but the thing is, I love you. And puwede namang araw-araw kitang ligawan pa rin.’

(I told Sunshine, ‘Everything happens so fast between the two of us, but the thing is, I love you. And I could always court you everyday.’)

(So at least ‘there are so many people- and we are already mature people that we’ve been through so much in our lives, the two of us, that we at some point, we may not find anyone else to love. So why should you hold back on what you’re feeling?)

On Instagram, Macky posted a collage made by some of Sunshine’s followers.

This photo collage is very much appreciated, thank you @teamsunshinecruz #mySunshine #7924 #999

Before dating Macky, Sunshine was married to actor Cesar Montano with whom she has 3 children. They are currently fixing their annulment.