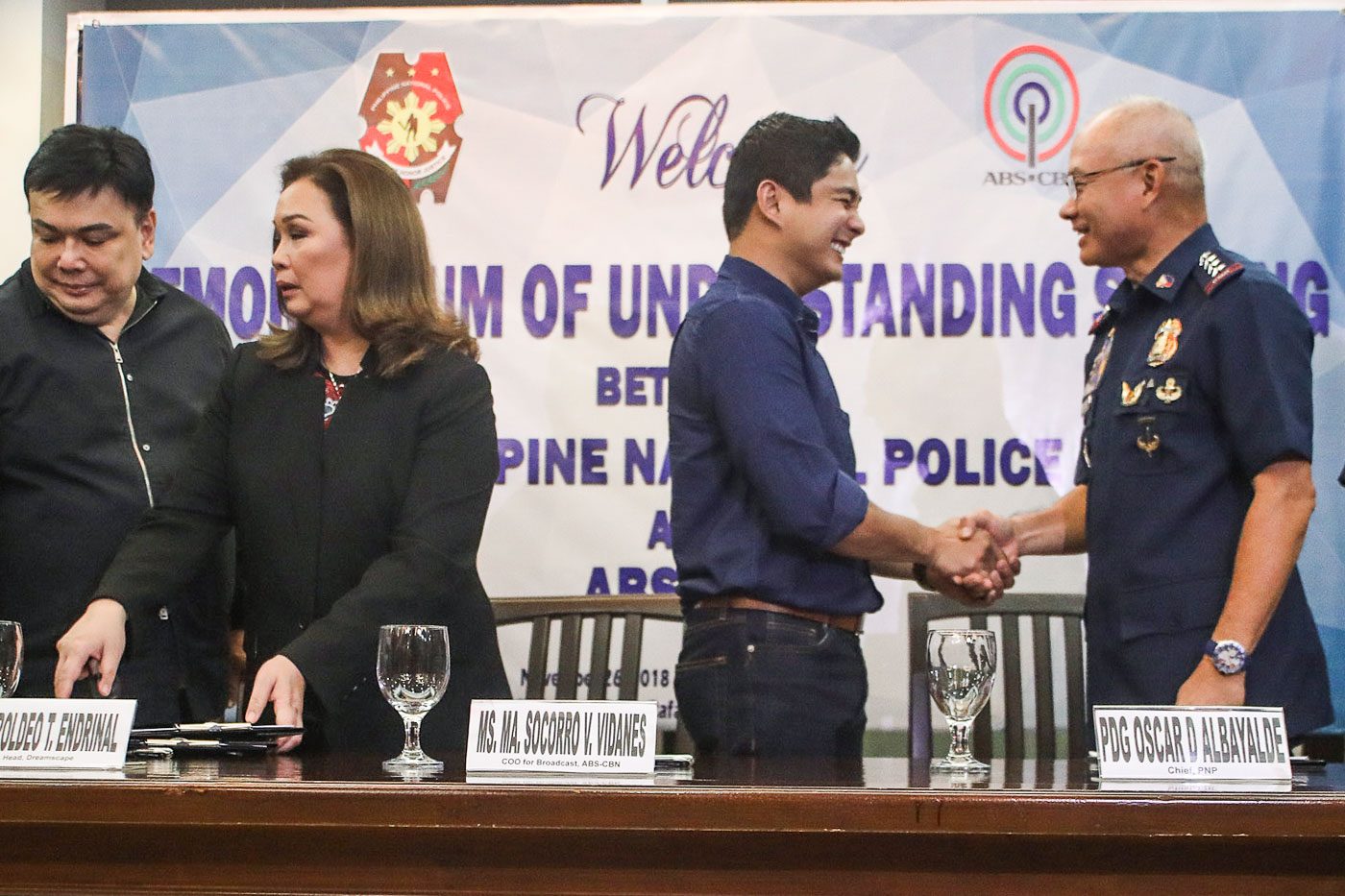 Facebook Twitter Copy URL
Copied
‘ABS-CBN should not purposely tarnish the image [of the PNP],’ reads a memorandum over the use of real police facilities for the fictional show

MANILA, Philippines – The Philippine National Police (PNP) and Philippine entertainment giant ABS-CBN on Monday, November 26, signed a Memorandum of Understanding to allow the use of actual police facilities and equipment in the production of hit show FPJ’s Ang Probinsyano.

The signing comes weeks after the PNP and the Interior Department, which had administrative control over the police force, cried foul over the supposed “unfair” portrayal of police in the long-running TV show. (READ: DILG to sue ‘Ang Probinsyano’ if plot is not changed) Ang Probinsyano follows the adventures of fictional cop Cardo Dalisay (Coco Martin), who deals with nefarious forces both within and outside the fictional version of the PNP.

But it’s the most recent storyline of the ABS-CBN show that ruffled the feather of police and government officials – in it, the fictional PNP chief conspires with the vice president to overthrow the sitting president.

Artist groups have called foul over the government’s apparent attempt to meddle in the show, with local celebrities pointing out that Ang Probinsyano, at the end of the day, is fictional.

The PNP and Ang Probinsyano executives and stars recently held a dialogue to iron out their issues, after the PNP, in a memo, officially ordered its personnel to withdraw support by disallowing the use of police facilities for the show’s production. Ang Probinsyano has used PNP training camps and offices – including those in Camp Crame – as a setting for the show.

“The PNP shall provide assistance and permission to use facilities and equipment for the production of the TV series,” reads part of the memorandum signed at Camp Crame. The show will also be allowed to use the actual PNP uniform under the “supervision” of designated police force members. Advisors will also be brought in as consultants when police operations are portrayed on the show.

“ABS-CBN should not purposely tarnish the image [of the PNP],” reads another part of the memorandum. Instead, the show should be a “medium in which the PNP core medium shall be upheld.”

Albayalde, speaking to media after the MOU signing, said they weren’t expecting the entire storyline to change but for it to be “more realistic.”

The use of actual police facilities, said Albayalde, helps in the show being “realistic.”

“[We’re] not necessarily [asking for the story to] always favor the PNP. We can’t do it that way because you can’t say the police force is perfect. We also make mistakes, we need to change some things,” said Albayalde in a mix of English and Filipino. – Rappler.com