For the directors of ‘Malamaya,’ sex is empowerment 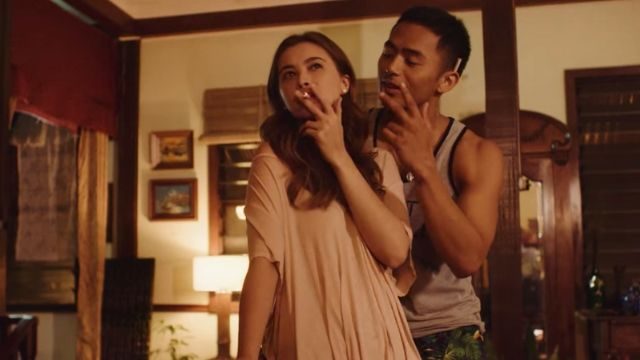 MANILA, Philippines – In the upcoming film Malamaya, Sunshine Cruz plays Nora, an artist in her 40s who juices up her colorless life by starting a passionate affair with a young amateur photographer named Migs, played by Enzo Pineda.

The teaser-trailer, released online, doesn’t show all the racy scenes that the unreleased full trailer will show, but already audiences can feel the intensity of the flirtation brewing between the two characters. Which only means that the full trailer could potentially break the internet when it comes out.

That said, Malamaya’s story is one audiences may feel like they’ve seen before – after all, wasn’t it only months ago when Angel Aquino and Tony Labrusca broke the internet with their steamy makeout sesh in the trailer for Glorious?

For the record, Malamaya was not inspired by Glorious – directors Leilani Chavez and Danica Sta. Lucia started conceiving it, along with Leilani’s co-writer Liberty Trinidad Villaroman, in August 2017, way before the trailer went viral.

Still the comparisons to Glorious are inevitable, but in Malamaya, the characters’ age gap – and even their relationship – feels almost incidental to the story of Nora’s journey.

If the directors’ words are anything to go by, the film isn’t so much about the complications of a May-December love story so much as it is a story of empowerment – both for the main character, as well as the audiences who watch it.

The film’s unapologetic and no-shame portrayal of sex, for instance, is in itself liberating in a conservative society that tends to sweep conversations about sex under the table.

“In the society na kinalakihan nating lahat (that we all grew up in), we’re banned from talking about sex right…so it’s liberating when you do that because it takes you off from the shackles of society na dapat ang babae nakahulma ng ganito (that dictates that women should only be a certain way),” Leilani told Rappler in an interview after a press conference on July 16.

By depicting a woman choosing to have sex on her terms and breaking relationship conventions while she’s at it, the film shows how something that still carries so much stigma can be a way for women to feel empowered.

Leilani referenced a 1980 film by the late Marilou Diaz-Abaya called Brutal, where one of the characters comes to realize how women are seen only either as virgins to be taken care of by men, or as whores to be paid by men.

“If you look at that kind of film and that kind of pespective, ang purpose ng babae ay dinedefine ng isang lalaki (the purpose of a woman is defined by a man),” she explained. But as she pointed out, that society is different now.

“We have a lot of these Me Too movements, a lot of this empowerment happening. So sex now is in a way democratized. Hindi na siya taboo (It’s no longer taboo). I’m not saying you should go out there and have sex, it’ all about choices. Empowerment is all about choice… That’s why [the film] is empowering, because you have a woman who wants to do it, who wants to do it on her terms,” she said.

Sunshine said as much, saying she hopes the film will remind women that their lives should not be defined by men.

(Our lives should not revolve around men. They’re just men. There are other sources of joy, like cats. Nora has a cat named Luna.)

The directors made sure to frame the story and its sex scenes from the female gaze. That lens is what they believe makes their film unique.

(She doesn’t have the victim mentality at all. She knows she became a victim of circumstance, but she still fights.)

The directors were also careful to ensure that the set was safe for the actors while the sensitive scenes were being filmed.

“Sa set, tanggal tao, as in like kung sino lang kailangan, kung hindi ka kailangan, bumaba ka (On set, we took people out, as in only those who are needed, if you are not needed, go down),” Danica shared.

“Minsan kahit kami, magmomonitor lang sa labas. Tas laging may nakaready na pagcucut, magtatakip agad kay Ms Shine, laging ganun (Sometimes even we would be monitoring from outside. And there’s always someone ready for when we cut to cover up Ms Shine),” she continued.

Danica and Leilani are two among the new batch of Cinemalaya directors – 50% of which are female.

The two directors believe that it points to good things for female filmmakers, who even now are well-represented in the local film industry with the likes of Bb Joyce Bernal, Antoinette Jadaone, and Cathy Garcia-Molina regularly making blockbuster hits.

“I think this is the first batch na ganun (where 50% of filmmakers are women). So we’re really, really proud. We’re very excited about it,” she added.

For Leilani, this shift in the industry is something she hopes there will be more of.

“It’s changing, it’s shifting. It’s good that we’re here, and hopefully more women filmmakers will enter the fray. Kung ano man yung materyal na gusto natin makita (whatever material we want to see) and will represent us and our views and not in a way that’s objectifying, then all the better. We need an army,” she said.

Malamaya will be showing at the Cinemalaya Film Festival at the Cultural Center of the Philippines from August 2 to August 13, with a gala screening to be attended by the cast on August 6 at 6:15 pm. – Rappler.com