‘The Buzz’ moments that are seared into our collective memories 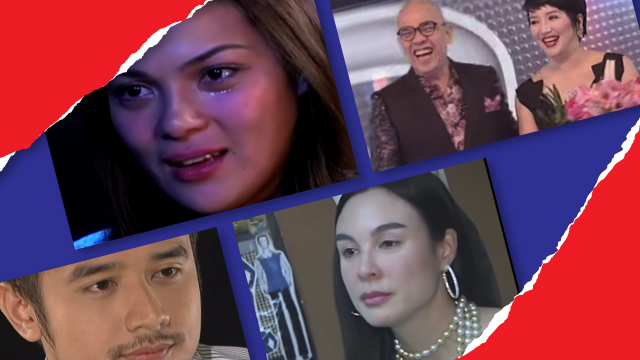 MANILA, Philippines – There’s nothing like an unmoderated showbiz scandal – and we’ve had a lot of those in recent months – to make us wish we still had The Buzz to look forward to every Sunday afternoon.

The talk show premiered on ABS-CBN in June 1999 with Boy Abunda as its original host. Kris Aquino later joined the show in January 2000 as his co-host, starting a talk show partnership that has yet to be eclipsed by other duos.

Several celebrity co-hosts would join the show over the years, including Ruffa Gutierrez, Charlene Gonzales, KC Concepcion, Carmina Villaroel, and Toni Gonzaga but Boy and Krissy were arguably the show’s beating heart – the pair had more chemistry as co-hosts and friends than some love teams we’ve seen onscreen.

The final episode of The Buzz was aired on April 5, 2015 – and Sundays haven’t been the same since. There’s been nothing quite as thrilling as Tito Boy’s promises of “eksklusibong eksplosibo” (aka PIPING HOT TEA), promptly followed by a dissection of this tea with the notoriously no-filter Krissy.

Boy’s current show, Tonight With Boy Abunda, continues to be a platform for celebrities to air their drama, but it just isn’t the same without his talkative co-host, who never hesitated to bring her own personal life to the show.

As we enter another year of showbiz kalat, here’s a look back at some of the most unforgettable moments in the 16-year history of what may have been the greatest celebrity talk show to grace Philippine airwaves:

The Buzz special report on the Barrettos

It’s not a legitimate celebrity talk show without at least one Barretto giving a tell-all interview, and The Buzz has had their fair share of Barrettos speaking up over the years. Particularly memorable was The Buzz’s coverage of The Barretto feud of 2013 – when sisters Gretchen and Marjorie called out Claudine and their mother Inday as Julia was launching her showbiz career in showbiz.

After releasing a comprehensive special report breaking down the history of the bad blood between the Barrettos, The Buzz then interviewed Marjorie, and Gretchen – who memorably broke down in tears on air.

When a new Barretto feud exploded in 2019 involving the same sisters, and this time even their nieces and supposed lovers, it only reminded us of The Buzz-shaped void on TV.

KC Concepcion on her breakup with Piolo

We may well have forgotten that KC Concepcion and Piolo Pascual were ever a thing, if it were not for this November 2011 interview where KC confirmed that she and Piolo had indeed broken up. KC’s interview, where she tearfully tried to explain – without really explaining – why she and Piolo broke up.

KC spoke about differences, and making sacrifices for Piolo because it was her first big relationship.

At the time, Piolo’s sexuality was already the subject of much gossip – but KC’s words were enough to further fan the flames and send viewers into a frenzy.

Many fans may have seen it coming at the time, but Jake Zyrus’ sexuality was only confirmed in an interview on The Buzz at the height of his career.

Then known as Charice Pempengco, the singer went on the talk show to come out as gay – which led him to say: “Gusto ko lang na sabihin sa inyo na ang gaan ng pakiramdam ngayon, na makakalabas ako ng bahay na wala akong itatago, na wala akong masasagasaang tao dahil wala akong tinatago.” (I want to say how free I feel, that I can leave the house without hiding anything, that I won’t step on anyone’s toes because I’m not hiding anything).”

In the following years, he would identify as male – and officially changed his name to Jake Zyrus in June 2017.

Pretty much every confession Kris Aquino made about her life

Before Instagram became Kris Aquino’s choice platform for spilling all her unfiltered tea, we all watched her do it on live TV. In a 2003 episode of The Buzz, viewers followed a real-life soap opera, when a tearful Kris claimed that her then-partner Joey Marquez put a gun to her head and beat her during arguments, and gave her a sexually transmitted disease (STD).

As a talk show host, Kris was truly unique – both the source of drama, and an intrepid interviewer who boldly asked the questions that no one else would.

After a mysterious absence from the limelight, JM de Guzman spoke to Boy, and in a candid interview came clean about his experience in rehab.

To admit to using drugs is a brave move by any measure, and for a celebrity to do so on national television made it all the more surprising – a moment, it seems, that could only have happened on The Buzz. – Rappler.com