Facebook Twitter Copy URL
Copied
Zoren Legaspi and Carmina Villaroel, Kris Aquino, Anne Curtis, and newly engaged Dingdong Dantes and Marian Rivera are just some of the celebrities who did the challenge

MANILA, Philippines  –  Local celebrities did not escape the ice bucket challenge, with husband and wife Zoren Legaspi and Carmina Villaroel as the latest  couple to do the challenge, after being nominated by BB Gandanghari.

The couple’s children Mavy and Cassie poured the water on their parents.

Watch the 3-part video below:

Stars such as Kris Aquino, Anne Curtis, Kathryn Bernardo and Daniel Padilla, couples Bea Alonzo and Zanjoe Marudo, Robin Padilla and Mariel Rodriguez, and Dingdong Dantes and Marian Rivera, and  Luis Manzano and Angel Locsin also took on the challenge after being nominated.

Here are some of the videos posted by the stars: 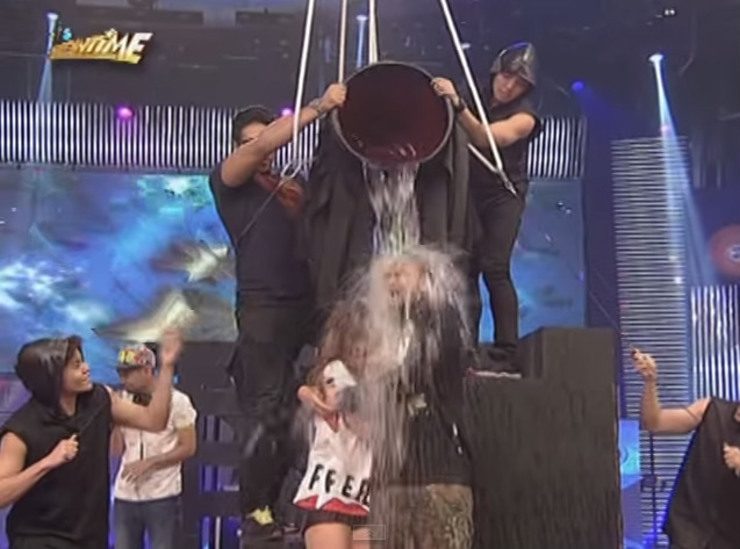 Even YouTube sensation Bogart Explorer took part in the challenge, with gusto.

Actress Kim Chiu, who was nominated by Kris TV headwriter/blogger Darla Sauler made a donation and agreed to do the challenge once she has rested from her busy schedule.

The Ice Bucket Challenge, which became a viral craze thanks to social media, aims to raise awareness and funds for ALS or Lou Gehrig’s Disease.

According to the rules, those nominated have 24 hours to respond and accept the challenge. If they choose not to accept, they will have to donate $100 to www.alsa.org/donate or to an ALS association of their choice. Or they can do both: take up the challenge and donate. (READ: FAST FACTS: ALS and the Ice Bucket Challenge)

International celebrities and sports personalities have taken the challenge. Filipino tycoons have also responded to the challenge after being nominated by their peers.

Even Homer Simpson joined the challenge, with a little help from his son, Bart.

Still, some critics have questioned the intent behind some of the challenges, commenting on the volume of water wasted, as well as whether some folks donate or opt to do it for show. (READ: Why I refuse to join the ALS ice bucket challenge by Jonathan Yabut)

This has sparked an ongoing debate about the pros and cons of the challenge, its relevance to the social media world, and even its contribution to the world of viral content. What do you think? Let us know in the comments below. – Rappler.com