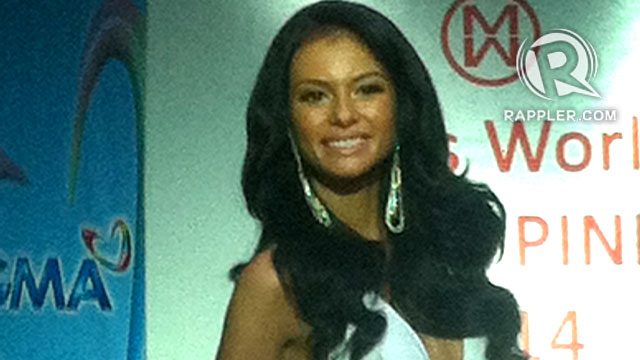 Model and TV host Valerie Weigmann was one of the contestants present at the Raven Boutique Club Wednesday, September 10, during the official announcement. In an interview with Rappler, Valerie said she thought hard  about joining the pageant, despite doing modeling and showbiz work. However, it was her advocacy that finally pushed her to go for it.

“For me it was a very big decision of course. Because I was thinking it through over the years actually of me experiencing modeling and showbiz at the same time. So it was good training for me.

“And the really big thing that made me decided to join was really my personal advocacy which is Musikaramay. I try to help the indigenous people -our indigenous brothers and sisters from Tarlac, the Aeta community.”

Valerie also shared that whether she wins the crown or not, she will continue in promoting the advocacy she started.

“Win or lose, I will still be active and raise awareness for my personal advocacy.  I will get together with my friends cause we’re all involved in it. Musikaramay – it’s street music, so we’re trying to raise money through street music.

“I am the one in charge of talking to sponsors, and to different places where we could play around an play for the indigenous people. But I will still be part of showbiz and modeling.”

For Valerie, this year’s Miss World Philippines is quite exciting because of the projects they will be helping out with.

“I guess it’s not just about the beauty when it comes to Miss World. For me I can already feel how excited the candidates are of helping and reaching out not only for our Miss World organization projects we will be having, but the drive to help and raise awareness by using this platform,” she said.

When ask if the decision to join was worth it, Valerie said yes.

“It’s amazing. It’s one of the best decisions ever. As of now, that’s how I feel. So really it’s an amazing feeling. I cannot explain how happy I am officially a candidate already for Miss World.”

Prior to joining Miss World Philippines, Valerie was one of the hosts of the noontime show Eat Bulaga and appeared on the cover of the June issue of Rogue Magazine.

The complete list of finalists will soon be announced by Miss World Philippines.

Who’s your pick to take home the crown this year? Let us know in the comments below. – Rappler.com