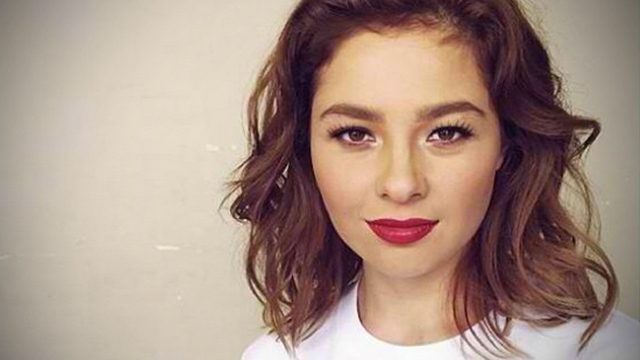 Facebook Twitter Copy URL
Copied
Jake also speaks up about the issue, clarifying the breakup and saying, 'Andi was the only girl I loved for four years and still is my greatest love'

MANILA, Philippines – Actress Andi Eigenmann has confirmed that she and Jake Ejercito are no longer together.

In an interview with Boy Abunda on The Buzz, Sunday, September 28, Andi said that she and Jake decided to break up because she was going through so much, especially the death of her father, Mark Gil.

(Its not that Jake is not a good person, but I came to a point where I wanted to give up.)

“That was the point in my life when my dad got rushed to the hospital and I needed him the most, and he wasn’t there for me,” she said.

Andi said that Jake stopped replying to her after he found out about her father’s condition. According to her, she could not wait for him and decided to make the decision.

“Nandoon na po ako sa point na wala na po akong oras para maghintay pa po sa kanya o umasa pa po sa kanya. (I was at that point that I did not have the time to wait for him or even hope that he would be there.) It’s about time that I start thinking about myself and in the middle of that, I’ve met somebody.”

(I just met somebody who helped me realize that there are other people, I can meet others. So I was confident about the decision that even if it would hurt, I needed to stop whatever Jake and I had.)

The somebody Andi was referring to is Bret Jackson, a former housemate from Pinoy Big Brother Teen Clash.

Andi was recently spotted with Bret during the Cosmo 69 Bachelors Bash on September 24 at the World Trade Center. She along with brother Gabby was there to support their cousin Geoff Eigenmann. (READ: IN PHOTOS: ‘Boyfriend buffet’ at Cosmo bachelor bash 2014)

According to Andi, she went out with Bret, which made Jake jealous. However, she clarified that before Bret, she and Jake already had problems.

“It was his personal decision (Bret) to keep talking to me and who wants to be there for me when that issue came out,” Andi said.

Andi said that before things became serious with her and Bret, she and Jake decided to give the relationship another try – but that did not last because of a photo that spread on social media, showing Jake with another girl.

Andi said she was hurt by the photo incident.

(I felt things were already okay, I was going to move on. I could have helped myself by being happy, then that’s what he did to me. For me, I felt like I was fooled.)

She also answered questions about her social media posts, saying that she was entitled to her opinion.

As for whether Jake’s family liked her from the beginning, Andi said she was not sure at all.

And asked if there is a possibility that she and Jake would get back together, Andi said:  “Para sa akin po (For me), never say never. I’ve said a million times that I’m gonna get over Jake na, I’ll never be with him again.”

“But then, the moment na magkaayos kami (we’re okay), it’s like I wanna be with him forever.”

After Andi spoke up on The Buzz, Jake Ejercito took to his Twitter to answer the issue.

RE: The Buzz First of all, I don’t deny that I’m not a perfect partner or boyfriend. I’ve apologised to Andi (cont) http://t.co/SO5Pta5RBL

“First of all, I don’t deny that I’m not a perfect partner or boyfriend. I’ve apologised to Andi and to the people who matter most to us for all my shortcomings and I still regret a lot of things I did wrong or failed to do.

I know a photo paints a thousand words. I am not washing my hands clean, but I did not intend for it to happen. If anything, my only slip-up was that I allowed it to happen.

Andi was the only girl I loved for four years and still is my greatest love. Before the incident, I discovered something that hit me like a truck. I am certainly not using it as an excuse, but it had a lot of bearing on how I reacted. I may not have chosen the best way to cope, but like what I said, I’m not perfect. And for that, I’ve also apologised to Andi.

I never directly addressed this issue in public as I would’ve wanted to keep it as personal and as private as possible. So I hope this will be the last time I would feel the need to.”

And above all, biggest thanks to those who kept their minds open and didn't judge me right away with only knowing one side of the story