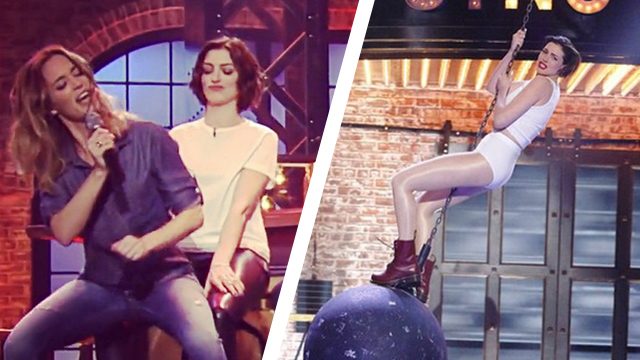 MANILA, Philippines – Actresses Anne Hathaway and Emily Blunt got competitive in a new episode of Lip Sync Battle, as they tried to outperform each other with the songs they chose. (Highlights: The Rock, John Legend, more in ‘Lip Sync Battle’ premiere)

Hands up if you're ready for Anne Hathaway vs. Emily Blunt tomorrow! #LipSyncBattle

Let’s take a look at their performances below:

Anne may look sweet as sugar for the cameras, but she was all kinds of fierce with her performance of Mary J. Blige’s “Love.” Check out the photos below:

Here’s Emily grinding on Anne while singing “No Diggity”:

Emily opened the next round with Janis Joplin’s “A PIece of My Heart.” Check out her costume below:

It's all business when Emily Blunt prepares for a #LipSyncBattle! pic.twitter.com/f4B7aNAZ3n

Anne went all out with her performance, going as far as swinging on a wrecking ball:

So much respect to the original Girl on the Wrecking Ball. Keep being your fierce and gorgeous self Miley- love your light

Did you think Anne deserved the win? Sound off in the comments below! – Rappler.com