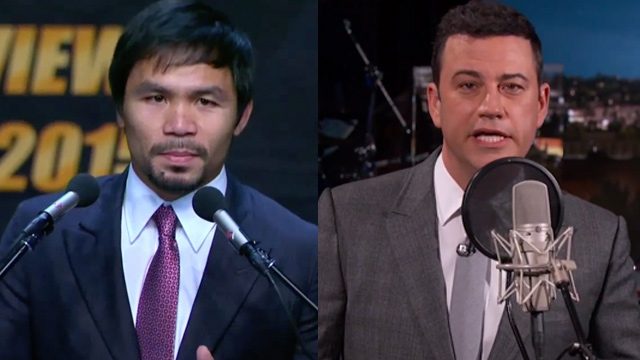 MANILA, Philippines – It isn’t everyday that Jimmy Kimmel sings in Filipino, but he did just that when he performed boxing champ Manny Pacquiao’s song “Lalaban Ako Para sa Pilipino” (I Am Going to Fight for Filipinos) on his show Jimmy Kimmel Live in a video posted on April 15.

“To inspire himself, to get himself fired up for the fight, Pacquiao just released his own walkout song,” Jimmy said before showing the music video.

Jimmy then performed the song, with the audience members actively waving along to the music.

He joked that he would want to submit this performance for consideration in next year’s Grammy Awards.

Manny Pacquiao tweeted a thank you to Jimmy for singing the song. He even said that it was good, and thought that Jimmy practiced really hard.

Thank you @jimmykimmel for trying to sing my song "Lalaban Ako" hehe pic.twitter.com/ZzRNBfedJT

Manny has appeared on Jimmy’s show before. Manny is currently training for his fight with Floyd Mayweather scheduled this May. – Rappler.com